The interrelated trends around miniaturization and portability, wireless communications, power-efficient computing and advanced display technologies have come together to create the smart devices of today. The patriarch of these devices, the smartphone, is 15 years in, and smart-wearables are now poised to drive the next great wave of innovation. This wave is shaped by the technologies that came before it.

It’s worth revisiting how we got here to get a sense of where we’re going next.

Wearables Hung Around Your Neck In 1975

The Path To Miniaturization, Digitization And Convergence

In addition to undoubtedly groovy clothes in the mid-1970s, your portable electronic devices probably had a strap and were hanging around your neck. By the end of the decade, your camera, your FM radio and eventually your Walkman had gotten smaller, cheaper and personal — creating the foundation for the consumer electronics industry.

The seeds of the digital revolution were also set during this era. In particular, around the wrist. In 1969, Seiko introduced the first automatic quartz watch that used a rotating pendulum inside the case to recharge. It wasn’t long before the first electronic wristwatch by Casio was born in 1974. The Casiotron’s later iterations included the Casio Databank CD-40, which allowed for data storage, such as telephone numbers, and provided a calculator.

The digital camera first came alive during this time, too. Kodak developed the first digital camera technology in 1975, but dropped the concept — which then lay basically dormant for the next 20 years.

By the late 1990s, miniaturization and digitization were in full swing. Small digital cameras were mainstream. The Garmin portable GPS device was launched in 1990. Bluetooth headsets become available in 2000. In 2001, the iPod changed audio and consumer electronics forever. Ultimately, these personal electronics moved from standalone items, to peripheral attachments, to fully absorbed components of the smartphone — it was just easier and cheaper to have it all together in a true mobile, converged smart device.

The Beast in Your Living Room

In the 1970s, it wouldn’t have been unusual to see a big TV console set up in your living room. Lots of wood, not so much screen. To address the screen to bulk ratio, the cathode ray tube (CRT) technology of the time was rapidly moving toward rear-projection big screen.

The advent of flat-panel liquid crystal display (LCD) was a watershed technology advancement that changed the trajectory of TVs, but also of computing and wearables. Casio offered the first LCD TV set in 1983 and Sharp advanced it using thin-film technology in 1988. With its low power requirements and increasingly small form factor, LCD paved the way for full-color, high-definition displays to be included in every device big and small — ranging from 100”+ TVs to smartphones, smart glasses and VR headsets.

What also emerged from the evolution of display technologies was another essential pillar of today’s smart devices — touch. As LCD became prevalent in portable computers, capacitive touch technology originally found on computer touchpads also became integrated in the display screens of smart handheld devices — such as the 1993 IBM Simon.

Capacitive touch enabled the user to interact with devices without a keyboard or peripheral, such as a stylus. Capacitive touch evolved into the multi-touch capability commonplace today, driven by the iPhone and based on the FingerWorks technology acquired by Apple.

The story of wearables is one of convergence.

This combination of display plus touch is the foundational user interface found in many of the wearable devices we use today. As devices get closer to the user, the more natural the user interface and interactions need to be — and no one single method works for all people in all cases. Without the convergence of user experience technologies that originated in the humble TV, the modern wearable category would not have happened.

The Computing Engine Cranks Up

The Economies Of Scale That Make It All Possible

As the wristwatch and your portable devices evolved, so too did the modern computer — it continually got smaller and more user-friendly. Quickly moving from the world of DEC microcomputers and the first PC, mobile computing became a reality in 1986 with the birth of the Toshiba T1100 — the world’s first mass-market laptop.

Laptops continued to get smaller and more portable, and the earliest personal digital assistants (PDAs) were created, with subsequent models based on the Newton platform that Apple developed in the late 1980s. The PalmPilot also emerged from this bloodline when Palm Computing introduced its first PDA in 1996.

The BlackBerry branched off from the PDA with the Inter@active Pager 900, a clamshell-type device that allowed two-way paging. Its initial success resulted in many generations of BlackBerries that were introduced throughout the 1990s, and evolved into the tablets and smartphones we know today.

We are entering a period of new innovation, new options and new devices that branch off the smartphone.

Through these stages of evolution, the subsystem and chip companies designed new manufacturing techniques that advanced their products, but, more importantly, the ability to stamp out units by the millions. This drove down costs, creating the ability to put a little compute power into just about every device imaginable. The semiconductor ecosystem, the fabs, the tooling and all that investment accrues to the entire smart-wearables category, without which, these would have remained expensive, low-volume niche devices.

The marriage of devices and the Internet

Networking is the glue that holds the various technology branches together. Early on, finicky and expensive analog systems were the norm. The worlds of voice and data were completely separate.

At the beginning of the 1980s the twin forces of wireless combined with packet-switched digital networking and unleashed a wave of change. OEMs and software companies converged around a collection of protocols and standards — Ethernet, Wi-Fi and others — making interoperability, integration and cloud-architectures possible.

Along with the growth of mobile computing, wireless networking also became standardized and commoditized, extending the reach of the Internet not just to servers and PCs, but also to portable computing devices, and, eventually with RFID, Bluetooth LE and ZigBee, brought the notion of the  Internet of Things.

The smart-wearable devices of today rely on a pervasive communications fabric. The amount of data created and consumed by these will be the driver of next generation networks. We are already starting to see personal networks of connected devices that will have profound effects on network topology and traffic patterns.

Smartphones first brought together the common trends in computing, communications, display and portable electronics. Fifteen years later, it is now the generic system — the baseline off which the next generation of wearables are building.

There’s a natural marriage and valuable self-reinforcing technologies with wearables and IoT.

After a long era of technology convergence into a single consumer device, we are entering a period of new innovation, new options and new devices that branch off the smartphone. Some, like watches and cameras, are disaggregating existing capabilities into optimized form factors. Others, especially smart glasses, are taking the smartphone guts and adding new capabilities to handle even more complicated and advanced scenarios.

The Next Big Branch

Wearables And IoT: The Marriage Of Humans And Machines

We’ve seen in our lifetimes a rapid evolution in the wearables family — it has brought together four core branches of technology into a new class of device. When we look back on the evolution of wearables in a few years, I predict we will see a new family in the mix — IoT (the Internet of Things). A connected environment and connected people that goes hand-in hand. There’s a natural marriage and valuable self-reinforcing technologies with wearables and IoT.

Like wearables, they are built with small, power-efficient compute, integrated with a variety of sensors and network connected. But they all require some connection to people, and that is where wearables come into play. We already see this exploding in the enterprise — industrial machines connected to workers with smart glasses, for example.

Overall, the story of wearables is one of convergence. Advances in the four industries of electronics, communications, computing and display each created the technology building blocks that show up in the smart wearables of today. We’re at the very beginning of a transformational new chapter of technology that’s poised to impact just about everyone. 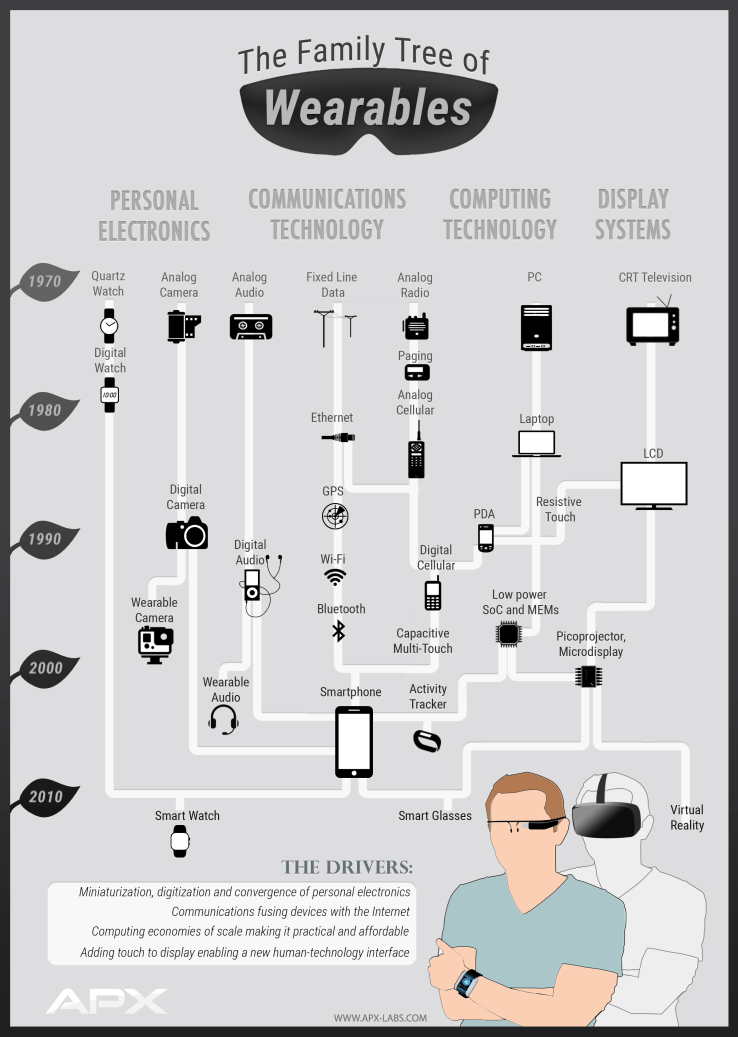