Tango, the mobile messaging unicorn that reached a billion-dollar valuation when Alibaba invested $280 million in it early last year, has laid off around 9 percent of its workforce after it shuttered a brief effort at e-commerce.

The Mountain View-based company launched an in-app commerce feature powered by Alibaba and Walmart back in May of this year, initially in the U.S. market, but it has confirmed to TechCrunch that ‘Tango Shop’ was closed down last month, leading to the lay-off off around 30 employees working on it.

“The initiative didn’t really pan out,” Tango CTO Eric Setton told TechCrunch. “We didn’t see the conversations we wanted. [There was a] good amount of traffic but the volume didn’t materialize. [We recently] updated the app to take the e-commerce flow out, but unfortunately couldn’t keep the team working on that initiative.”

Following the reorganization, Tango now has 270 staff across its U.S. office and a smaller presence in Beijing, China. Interestingly, one high-profile exit from that reshuffle was Chi-Chao Chang — formerly VP of Tango Labs and the lead on Tango’s commerce initiative — who is now working at Facebook, although he is involved with the social network’s search business not Messenger.

Despite the retrenchment, Setton claimed Tango is on track to have its highest quarter of revenue to date.

“This year, [revenue] is an order of magnitude above what we’ve ever seen before,” he said, although he declined to provide a specific revenue figure.

Setton also declined to give an update on Tango’s current user base. The last figure given by the company came in May, at the launch of Tango Shop, when it claimed 300 million registered users. That wasn’t a big jump on the 200 million registered users that it announced in March 2014, when Alibaba invested and Tango announced its first (and only) monthly active user count: 70 million. 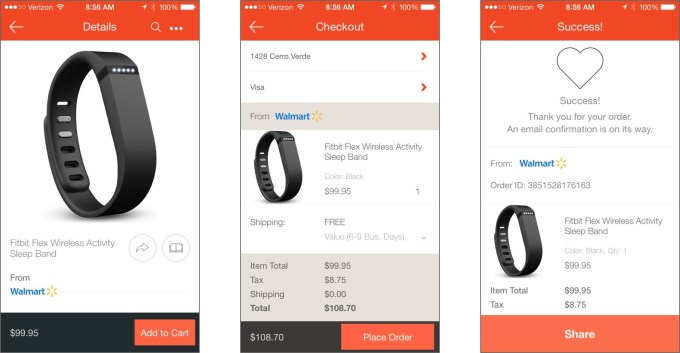 I said back in March that the company “faced an uphill battle” to make Tango Shop work simply because other messaging apps are dominating the conversation in the U.S. Trying to monetize users when they aren’t particularly locked into your app is challenging at best.

Then there’s the differing culture in the U.S. Yes, in-app commerce is proving to be a success in China, where WeChat is the dominant social company with little competition, but consumers in the U.S. are spoilt for choice both in terms of messaging and social media, as well as e-commerce platforms themselves.

Setton admitted that, while Tango Shop didn’t work out as the company had hoped, social e-commerce is likely to work for other players, such as Facebook Messenger, and he fully expects to see the strategy adopted by rivals in the future.

So, what now for Tango?

It’s a difficult one. The company is a relative messaging veteran, having initially launched as a mobile video calling service back in 2009. Today, it describes itself as combining “communication, social networking, and content in a single platform.” There are plenty of apps offering the same package and, as I’ve said before, it isn’t too clear which markets, if any, Tango is the No. 1 player in, which makes locking users into the service and monetizing them tricky.

Exits for unicorns are something that is still being figured out as the number of companies valued at a billion dollars or more grows. But, Alibaba’s continued obsession over messaging — after missing the mobile chat race in China — and its ongoing interest in the U.S., could give Tango a shot at an exit via acquisition. However, if revenue and user growth isn’t anything to write home about, the Chinese company might not step in for Tango after all.