A number of startups emerged this year to offer consumers an easier way to shop: instead of immersive, e-commerce experiences, companies like Magic, Operator, Fetch, GoButler, and others, including Facebook, are testing out messaging-based virtual assistants that help you buy nearly anything from airline tickets to dinner reservations, to great gifts, and more. Now Google is getting in on that action, too. The company is currently trialing its own SMS-based alerting service, this time focused on helping holiday shoppers find the best deals.

The service was spotted in the wild earlier today by the unofficial Google -watching blog, Google Operating System, which saw the option to “subscribe” to Black Friday phone deals pop up on their mobile phone after a related search query.

However, the new deals service was quietly announced by Google earlier this month, by way of a Google+ post. It received a little press coverage at the time, but largely on blogs that only cover Google, search engines or SEO, as opposed to more mainstream attention. That may change as consumers turn to their phones to find Black Friday deals in the days ahead. 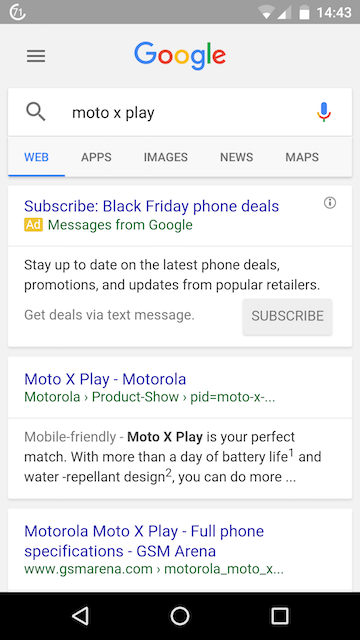 While framed as something Google is testing during the “holidays,” the move indicates that even the search giant acknowledges that the way consumers will shop, browse, and transact on mobile devices in the future may end up being radically different from on the desktop web.

With our phones, (and now our watches, too), our devices are turning into alerting platforms that deliver us the information we need, when we need it. And instead of searching and comparing dozens of options, we may simply communicate with an assistant – part human, part AI – who helps narrow down our options, present us with the best choices, then fulfill the request. This is what’s called the “invisible app” market, as we’ve referred to it here on TechCrunch, and it makes sense given the rise of mobile messaging, combined with the ability to integrate a virtual assistant-powered experience over familiar communication channels like SMS.

Google’s service today falls far short of a personalized assistant, but the company has already proven with its virtual assistant Google Now that it could expand in this direction, if it choose.

But for now, the idea behind the new deal alerting service is to translate the shift in how consumers shop into a new ad format. These “deal alerts” are actually an AdWords option that’s being trialed with a limited number of advertisers, the company explains.

Google declined to provide information related to ad pricing, or a list of participating advertisers, given the service is considered to be only a “test” at this time.

However, what we do know is that the alerts are  only available on mobile, only in the U.S., and the text messages returned are powered by Google. In fact, Google is creating customized text for those who sign up directly, the company says.

If you search for a general term like “black friday deals” from your mobile phone, you may see an option that prompts you to subscribe to alerts from a Google ad at the top of your search results. If you choose to do so, your phone number will be kept private, says Google, and you’ll be able to opt out of the text messages at any time.

However, while choosing to use the new alerts service, you’ll be sent relevant offers from participating retailers across a number of popular holiday shopping categories, like computers, phones, and gaming consoles. 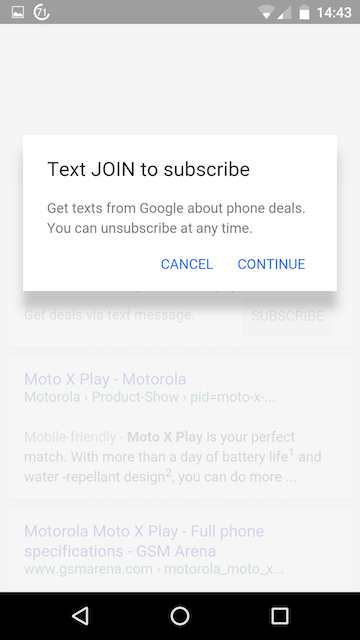 The Google Operating System blog happened to spot the text-messaging deal subscription service when they searched for “moto x play” – indicating that the ads aren’t only tied to “black friday” or “cyber monday” search queries, but to any matching products from participating advertisers.

You don’t have to wait to see an ad to try out the new service. Google says you can text the word “JOIN” to the following numbers, depending on what deals you want to see:

We did experience a few bugs when doing so, though. For example, a link to “learn more” that’s texted back after sign-up redirects you to a broken web page.

Google says the ads began rolling out earlier this month, following the initial AdWords announcement, but it’s likely that they were still few and far between until Black Friday neared.

If the test is successful, there’s potential for Google to expand this service beyond just tracking holiday deals. If consumers opted in, the service could serve as an app-less counterpart to the “Google Now” virtual assistant, pinging you about other relevant e-commerce opportunities based on search history (if you could get past the creepy factor of something like that), or you could track product categories or brand names, then be alerted to sales.

But it’s unclear at this time what Google will consider a successful test, or if it has any further plans, if that’s the case. It’s also unclear if consumers are even interested in a this sort of deals alerting service.

After all, the benefit to the other messaging-based commerce startups is that human touch. Even when primarily automated, there’s a conversational aspect to using the rival services, and most will also adapt to your preferences over time. Google’s service, for now at least, feels more like opting in to advertisements – as it is – and less like personal assistance.