Following a number of big moves to attract subscribers and grow its revenue, including a deal with Epix films and the introduction of a commercial-free paid tier to its service, streaming service Hulu has managed to shoot up the ranks on a number of app store charts this past month. It reached No. 8 on the worldwide iOS Top Revenue chart for October and No. 10 on the worldwide Top Revenue chart for iOS and Android combined.

Hulu is also moving up the ranks in terms of monthly active users, according to new data provided by App Annie, though it still has far to go to reach No. 1 Entertainment app Netflix or No. 2 Vine.

In terms of iOS revenue, only one other video streaming service ranked higher than Hulu during the month of October: HBO NOW, which was No. 4 to Hulu’s No. 8.

In September, Hulu wasn’t even in the top 10 for iOS and Android revenue combined; it had to move up five spots to score this position. 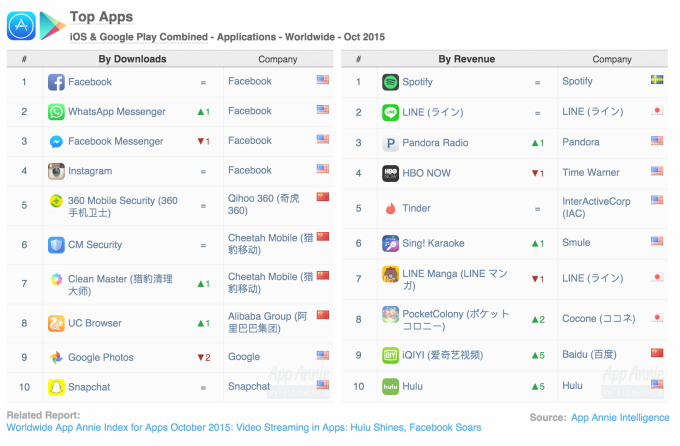 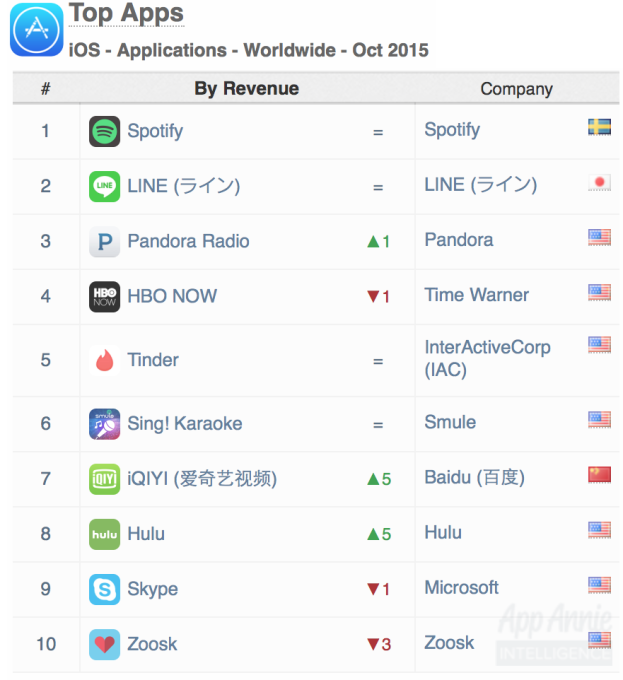 Other streaming services also did well in October, including Spotify (No. 1) and Pandora (No. 3), but these two are not focused on video, of course.

Related to its growing revenue is an expanding subscriber base willing to pay for the TV and movie streaming service. Hulu said earlier this year that it had reached 9 million subscribers, a 50 percent increase over 2014, and that, on average, viewers were watching at least 30 percent more content.

Those figures are reflected in Hulu’s climb up the U.S. Monthly Active Users (MAU) charts in the iOS Entertainment category in October, where Hulu now ranks No. 5 behind Netflix, Vine and Fandango. The company was around the same ranking for monthly actives in September, but in August it was a few spots down on the Top 10 list, App Annie tells us. 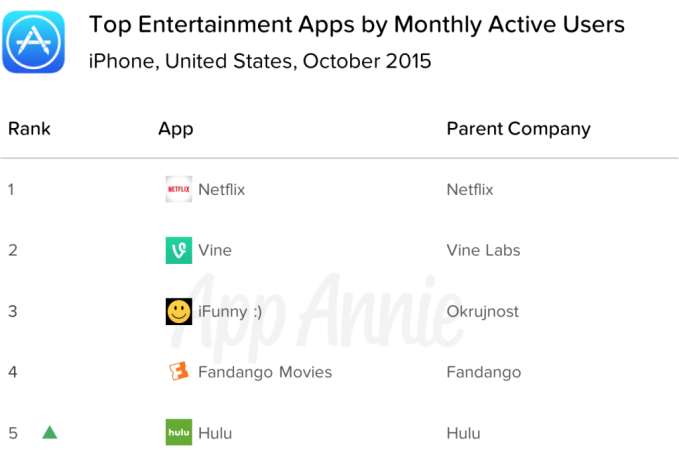 App Annie cites Hulu’s deal with Epix as helping contribute to the company’s recent surge in both active users and revenue.

In August, Netflix announced it would not renew its partnership with Epix, which meant it would lose a number of high-profile films by the end of September, including “Hunger Games: Catching Fire,” and “Transformers: Age of Extinction,” for example. The company explained that it decided to invest in its own original content and exclusives, rather than films that could be found elsewhere.

Now these films and others are on Hulu, expanding its movie lineup considerably with a number of blockbuster titles. For example, at launch the agreement saw the Hulu debuts of films like “Teenage Mutant Ninja Turtles,” “Star Trek: Into Darkness,” “World War Z, Wolf of Wall Street,” “Jack Ryan: Shadow Recruit,” “Robocop,” and “God’s Not Dead,” in addition to the above-mentioned films.

Says App Annie, this move to acquire more content “resonated with its subscribers and coincided with a surge in revenue” that pushed Hulu’s app up the charts.

But it’s hard to point to the Epix partnership, the ad-free tier, or just a general growing interest in Hulu combined with the larger cord cutting trend as being the main factor contributing to Hulu’s climb in the charts. Instead, it’s likely a combination of all of the above.