UrbanClap, which uses a matchmaking algorithm to help consumers find the best service providers in major Indian cities, plans to scale rapidly after landing a $25 million Series B. The round was led by Bessemer Venture Partners, with participation from returning investors SAIF and Accel Partners, and brings UrbanClap’s total venture funding so far to $37 million.

TechCrunch first profiled UrbanClap in April, after it raised a seed round.

Founded in October 2014, UrbanClap has grown rapidly over the past year and now claims to be the largest services marketplace in India. The company, which operates in Delhi, Bengaluru, Mumbai, Chennai, and Pune, currently has more than 20,000 service providers across 75 categories, and processes 5,000 customer requests a day through its mobile apps and site.

In the next twelve months, UrbanClap’s goal is to grow its categories to 150, increase its providers to 200,000, and service over 100,000 customer requests a day. Its latest funding will be used to expand into 25 new cities, double the size of its team from 300 to 600, and refine its technology. 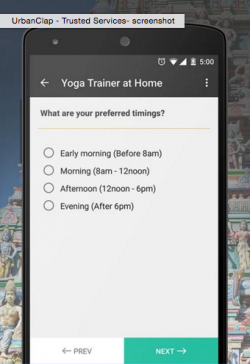 Co-founder Varun Khaitan says UrbanClap’s goal is to “become synonymous with the word services in India.” In order to set itself apart from traditional classified sites and other directories, UrbanClap’s matchmaking algorithm is designed to not only help users sort through the large array of services in their city, but also make sure providers (who it calls partners) get good leads that result in business.

This is especially important because UrbanClap plans to monetize by charging its partners to respond to requests through its platform. While fees will vary between service categories, Khaitan says the company aims to take about 10 to 20 percent of each completed transaction’s value.

Over the last few months, UrbanClap has focused on honing its algorithm, which asks users a series of questions tailored to each product category, and combines the answers with data like how responsive providers are and their performance ratings to make recommendations. In order to send partners better leads, UrbanClap also plans to start analyzing information from the consumer side, like how much time they spend on questions, in order to separate users who need services right away from people who are just doing research.

Khaitan says the ease and accuracy of UrbanClap’s platform has resulted in a strong retention rate—more than 40 percent of users each month are returning customers. He adds that instead of being annoyed by the number of questions, users are reassured by UrbanClap’s surveys, because it makes them feel that the platform takes their needs seriously.