Social news aggregator Nuzzel is unveiling version 2.0 of its website and app — a version that CEO Jonathan Abrams described as “Nuzzel for Everyone.”

Nuzzel previously worked by creating a feed of the most-shared stories from the people you follow on Twitter. You can still create that personalized news feed, but the service no longer requires a Twitter login.

Automatically assembling a newsfeed from your social networking accounts used to be the whole point of the app, so this seems like a pretty big departure. But again, loyal users can continue using Nuzzel the same way they have for the past year or so.

And the startup was already moving in this direction with the creation of topical feeds. This makes the app the usable by people want to keep up on certain types of news, regardless of who they follow on Twitter — and by folks who aren’t on Twitter at all. 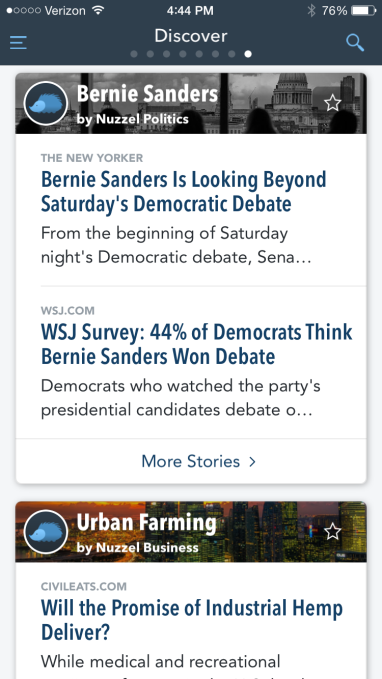 Nuzzel is also announcing that it has raised $1.7 million in additional funding, from investors including Salesforce.com CEO Marc Benioff and SoftBank Vice President Nikesh Arora. Weirdly, that’s the same amount that the company has raised twice before, but Abrams (who you may also know as the founder of Friendster, and who’s pictured at the top of this post) said that’s just a coincidence. He also said the media industry investors announced back in September were part of this round, which hadn’t closed at the time.

“The news industry guys actually wrote smaller checks compared to the Silicon Valley investors, so didn’t represent most of the cash, but we thought it was very useful to us to get some investors with media/news connections and experience, not just more Silicon Valley insiders,” Abrams said. “Actually, the round started out with reinvestment from some of our existing investors … and then we thought it would be cool to also use the opportunity of the new round to get some of these news/media guys involved.”

In addition to Benioff and Arora, new investors include: