History is littered with bad predictions.

In 1876, Sir William Preece, Chief Engineer of the British Post Office, claimed that his countrymen and women would never adapt what was then a just-emerging technology. “The Americans have need of the telephone,” he quipped, “but we do not. We have plenty of messenger boys.”

On January 1, 1962, a then unknown rock and roll band calling themselves The Beatles auditioned for Decca Records. The label passed on signing John, Paul, George and Ringo, claiming that “guitar groups are on the way out” and that “The Beatles have no future in show business.”

Although it’s easier to make a foolish projection than it is an accurate one, the human appetite for acting the part of Nostradamus never diminishes. The world is a large place, and summing it up with a single, tidy sentence has a certain appeal in that it brings order to chaos, though it almost always does so at the cost of accuracy and truth.

Take, for example, recent pronouncements by the likes of The Washington Post and Business Insider that millennials are no longer interested in owning automobiles. They would have us believe that the latest generation of maturing consumers evince more enthusiasm for a “sharing economy” that enables them to get from point A to B via Zip Car or Uber Pool while avoiding the “burdens” of insurance and parking. However, few reporters have really turned a critical eye on what statistics show is a fairly damning bit of hyperbole.

Those warning of the impending death of the American car culture are quick to point at this country’s ballooning student debt and the slow economic recovery in the wake of the Great Recession as the major reasons for a supposed generational aversion to car leasing and ownership.

And some of the entrepreneurs and venture capitalists I respect the most have argued that millennials will simply never own cars. John Zimmer, the president of Lyft, recently said, “You could actually start seeing the majority of millennials in the next five years or so saying there’s no reason I should get a car.”

John has built an incredible company, but there’s one problem with his conclusion: The facts don’t support it.

According to a recent report by JD Power & Associates, long considered the premier American research firm for making sense of the car industry, millennials surpassed Generation X in car purchases two years ago. In 2014, they actually accounted for 27 percent of new car sales in the U.S., up from 18 percent in 2010. 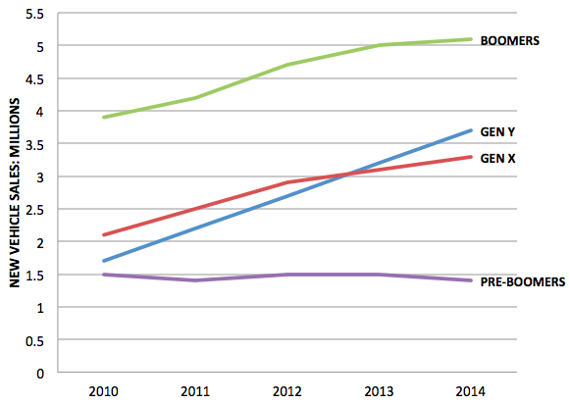 What makes millennials unique, however, is they came of age during a time of economic uncertainty. Many first entered the workforce during the worst job market in decades, which forced some to move back in with their parents and take historically low entry-level salaries. But they have, predictably, emerged from the rubble of these last seven years with an increased emphasis on value hunting.

And they are, by leaps and bounds, the most technologically savvy generation of consumers in this country’s history. They have been raised and educated in a seamless world of wireless connectivity, when walking around with a smartphone means that the entire history of human knowledge is accessible so long as a strong enough signal is available.

But this is a generation that requires both convenience and affordability. And anyone who has ever tried to strap a car seat in the back of an Uber can tell you, there is nothing quite like owning your own car, especially when you become a parent.

So, yes, while companies like Lyft and Uber have transformed the transportation space in an amazing way, millennials are not turning their backs on the car culture we know and love. In fact, they’re saving it.