That’s the problem she’s trying to solve with her new app. Taylor (pictured above with her co-founder and CTO Elisabeth Boonin) suggested that while texts are great for sharing information, they’re less effective at conveying authentic emotion. Sometimes emojis just don’t cut it, you know?

In her view, phone calls are more effective, but she noticed as she and her friends became busier with their jobs and their families, and as they moved to different time zones, it became harder and harder to find a time when they were both free to connect. So Rolltape allows you to send voice messages to your friends, which they can listen to whenever it’s convenient for them.

Before starting Rolltape, Taylor spent nearly eight years at Google. She’s actually not the only Googler to become interested in voice messaging — I wrote about The Cord Project, also started by former Google employees, last year. However, where Cord tried to emulate many elements of texting, Taylor’s going in the other direction.

“It’s not like an audio text,” she said. “It’s meant to be a little bit longer form.” 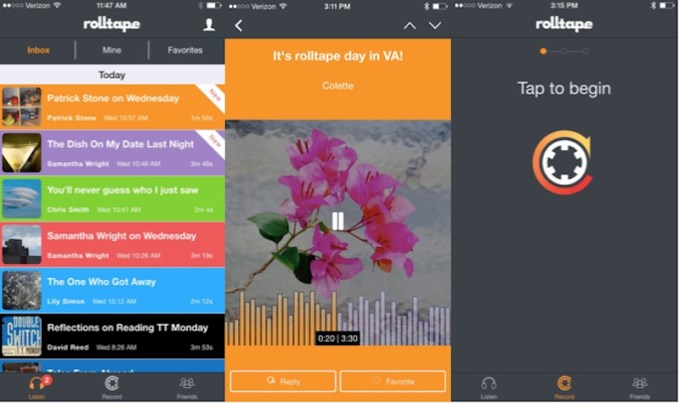 The app currently suggests that users limit their messages to five minutes, and Taylor said messages sent during the beta test averaged between two and three minutes in length. She added that people use the apps to share stories, as well as “extended jokes and ideas and theories and all this stuff I miss about talking to my friends from my college days, before life got crazy.”

Like a regular phone call, these messages can mix the mundane and the serious in surprising ways. For example, Taylor left me a message that started by discussing the groceries she was lugging across San Francisco to the Rolltape office, then moved into recounting an emotional conversation she’d had with close friends about the attacks in Paris.

The messages can also include images (either your own images or the ones licensed by Rolltape) and music. Taylor compared these features to Instagram’s filters. Before Instagram, “Everybody had a phone, everybody could take a picture, but [once] they offered these filters, now everybody could create something beautiful.” Similarly, she’s hoping Rolltape can make it easy for you to create an audio messages that’s not just intimate, but also beautiful.

For now, Rolltape users can only send messages to their friends (either individual friends or several at once). Taylor said this a key part of making people comfortable with recording personal stories — you might be willing to share those stories with a close friend, but not with the world. At the same time, she said she’s open to allowing more broadcast-type sharing in the future.