Facebook isn’t offering paid stickers directly, but Singapore startup PicoCandy‘s third-party Messenger app will now be one of the apps selling unofficial stickers packs, some of which cost $0.99 or $1.99.

Stickers first grew popular in Asia, where they were pioneered by Line, the mobile messaging company from Japan. Over the last couple of years, stickers have gone from being a topic of amusement in Western markets, to a form of media that has been embraced by countless messaging and communication services, as I pointed out two years ago, and more recently brands.

Facebook has taken a fairly conservative approach. All its own stickers remain free. It has brokered deals with some media companies to exclusively run their stickers — for example, iconic toy brand Lego or popular kids film Despicable Me — but the focus has always been on keeping stickers and emojis free. (Facebook has instead dedicated resources to adding stickers to other parts of its service beyond Messenger, e.g. within status updates, inside photos and as comments.)

But through its third-party Messenger app platform, PicoCandy will be selling stickers in its first consumer app. 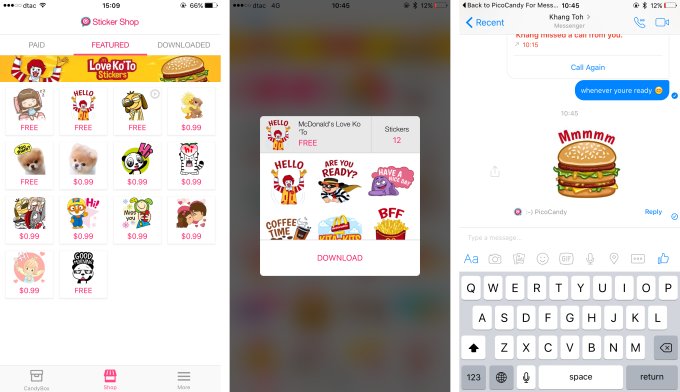 Two years ago, Line was making $10 million per month from sticker sales from a then-230 million registered userbase. That figure has certainly increased considerably — Line’s average revenue per user has jumped even though user growth has slackened — but the company has never given an updated figure. Indeed, its DIY creators marketplace alone grossed $75 million in revenue during its first year of business, and it is one small segment of the stickers that Line offers.

That’s pretty convoluted and hardly a convenient process. Many people will be put off by the level of friction involved.

It is just the starting point though. In the same way that Facebook has integrated GIFs into Messenger, after finding that the experience of downloading and then using third-party GIF apps for Messenger is cumbersome, Facebook could choose to allow third-party stickers to integrated into the messaging app over time. But there’s no sign that will happen.

“This first version has global stickers, which are English-based and not global, but very soon we’ll be offering localized content.. and it will [eventually] be integrated within the [Messenger] app,” Geraldine Yong, PicoCandy CEO, told TechCrunch in an interview. 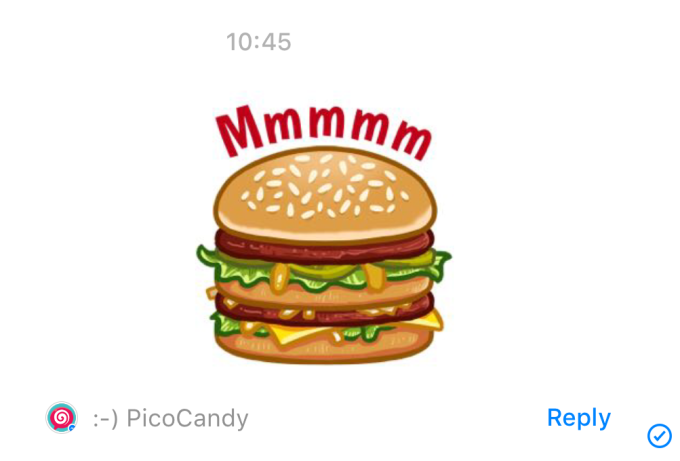 Yong admitted that multiple apps are not ideal, but reemphasized the roadmap to an integrated experience.

“The [Messenger] user experience is not the most ideal,” she admitted. “Facebook is taking steps to make it more conducive for users. We’ll [also] work on things to improve the experience, so it won’t just be standalone. It’s coming up soon, [but] this is the first part.”

If it follows what it did for GIFs, Messenger’s integrated sticker feature could pool content from across different partner apps and serve up content based on search terms and what is trending.

PicoCandy, which matches brands with sticker designers and allows stickers to be deployed across multiple services, is currently offering stickers from McDonalds (free), and a mixture of free and paid for content. (There are currently nine paid-for sticker pays available via its app.)

Facebook isn’t currently taking a cut of any money that PicoCandy makes via its app, but Google and Apple will take their usual share of revenue for purchases made on Android and iOS devices, respectably. You’d expect that, when the social network wants to make a bigger sticker splash, it would take a slice of stickers sale — although Facebook could also monetize from brands that pay it to allow them to offer stickers to raise awareness, a move that could become particularly important if/when brands are given dedicated accounts on Messenger and can interact directly with users.

Note: This story has been updated to clarify that Facebook has not partnered with PicoCandy directly to sell these stickers. They are available as an in-app purchase offered by PicoCandy through its app on the Messenger platform, which was announced at Facebook’s F8 event earlier this year.