Apple seems to be using the Top Charts section of its iPhone App Store to promote its own applications by listing apps like Numbers, Keynote, Pages, iMovie and iTunes U, in higher positions than they would normally rank. When viewed on an iPhone, these apps are showing up intermingled in the Top 20 Free applications on the iPhone, but when viewed from the desktop version of the App Store, they’re either not present at all within the Top 20, or in different positions.

The discrepancy, of course, could be related to a bug in Apple’s App Store ranking algorithm, but it’s a persistent one if that’s the case.

It doesn’t appear to be impacting the relative rankings of most other Top applications besides Apple’s. That is, Facebook Messenger is still at the top of the App Store, followed by newcomer Acapella from PicPlayPost, then YouTube and then Facebook.

However, in the desktop version of the store, a game called Twist is ranked higher than Instagram and Snapchat, while on the iPhone 6s version of the App Store, Twist shows up immediately after those two applications, even when the two charts were viewed at the same time.

Also interesting is the fact that Top Free Charts listings seem to vary from device to device. For example, with another TechCrunch writer, I compared the rankings from an iPhone 5s and an iPhone 6s, both running the latest version of iOS, at the exact same time and found we had two different versions of the App Store’s Top Free Charts on our respective phones. 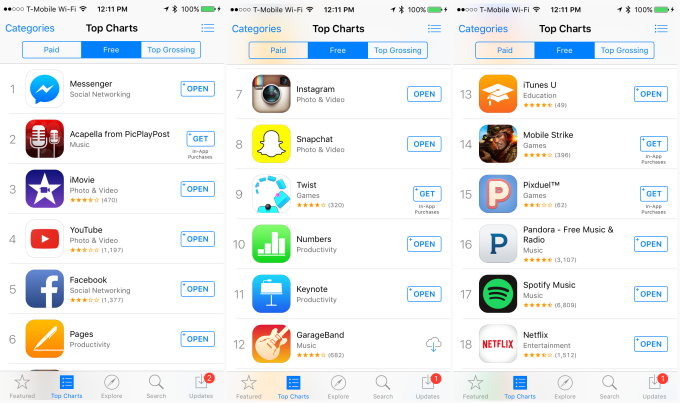 According to its initial findings, Apple’s apps seem to show up in random positions on the App Store app on the iPhone, and would sometimes remain listed in the Top Charts even after they were installed on the end user’s device. The company was alerted to this behavior when it noticed that its own ranking data wasn’t matching up with what was appearing in the App Store itself.

Only GarageBand and iTunes U should be ranking in the Top 10, per Sensor Tower’s data, but not Apple’s productivity suite apps or iMovie.

Sensor Tower first tested the App Store on several phones running the latest version of iOS (9.1), and has also now tested this on an iPhone 6 and iPad mini, and encountered the same discrepancies. Plus, they, too, noticed that the issue doesn’t affect the iTunes App Store for iPhone on the desktop.

However, Sensor Tower found that an iPhone running an older version of the iOS software (8.3) didn’t have the same problem as the other devices.

The issue is strange because it can’t always be duplicated. AppFigures CEO Ariel Michaeli, for example, told us that he sees the same Top Charts on his iPhone and desktop.

Without Apple’s official confirmation (no comment has yet to be provided), you can’t officially chalk this up to being Apple’s direct, manual manipulation of the Top Charts rankings. It could be a bug.

That being said, it is worth pointing out that it wouldn’t be the first time Apple’s own apps “magically” appeared in the Top Charts on some devices and not others. For example, a Twitter user in May happened to spot a similar oddity on his iPhone 4 and iPhone 6. When viewing the App Store side-by-side on both devices, Keynote, GarageBand, Numbers and the Apple Store weren’t found on in the iPhone 4’s Top Charts but were on the iPhone 6, he claimed.

Just scrolled through App Store Top Charts on an iPhone 4 next to my 6. Keynote, GarageBand, Numbers, & Apple Store aren’t listed on the 4.

Apple has used its App Store to more blatantly promote its own apps in years past, too. For instance, it once started returning its own stock applications like the iTunes Store, Messages, Safari and even Siri when users searched for related terms on the App Store like “movies,” “sms,” “web,” or “Siri” and more. It also pointed users to iCloud, when that term was searched.

If the current ranking manipulation is being done manually, it would make sense that it would be device specific – users with new iPhones like the 6s or 6s Plus might be prompted to install Apple’s apps as they turn to the App Store’s Top Charts to fill up their new phone with applications.

For third-party developers, however, the question here is whether or not this manipulation (or glitch, if you’d rather), is impacting their own rankings. If Apple is inserting its own apps into the Top rankings, it could push down developers’ apps either out of the Top Charts altogether, or further down the list, depending on the device or end user.