Facebook Messenger is testing out self-destructing messages. Currently available for some Android and iOS users in France, the feature allows people to send messages that vanish in an hour. BuzzFeed first reported the news.

In a press statement, Facebook said “Disappearing messages gives people another fun option to choose from when they communicate on Messenger. We look forward to hearing people’s feedback as they give it a try.” The company hasn’t revealed if and when the feature will be available in other countries.

Users can turn on disappearing messages in a chat by tapping on an hourglass icon in the top right of their screen. Anyone else in the conversation thread can turn the feature off. 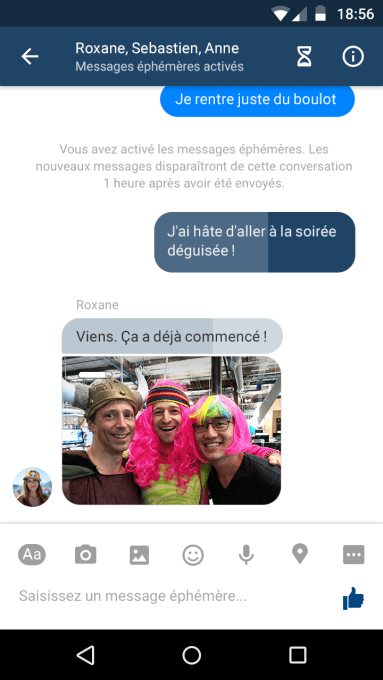 For example, Line, which has 211 million users, recently introduced “Hidden Chats,” or encrypted messages that disappear within a set amount of time. WeChat, the most popular messaging app in China with over half a billion users, has allowed people to recall messages since 2014.

The main appeal of ephemeral messages, however, in Facebook Messenger isn’t just about sending sensitive information. As TechCrunch’s Josh Constine notes, disappearing messages echo real-life conversations, an experience Messenger has sought to duplicate with features like read receipts and its quick selfie cam.

This isn’t the first time Facebook has experimented with ephemeral messaging. In December 2012, just as Snapchat was taking off, Facebook launched Poke, a similar service that sent self-destructing photos and videos.

Despite speculation that it would be a Snapchat killer, Facebook Poke failed to gain traction. Since then, Snapchat has gained about 200 million monthly users and built an ecosystem that has gone beyond disappearing photos to include richer features like Live Stories.