As text messaging takes over more of my communication, I find myself on lots of long and complicated chats where I’m trying to plan and coordinate with multiple people. Now a startup called Cola aims to replace all that back-and-forth with a set of interactive “Cola Bubbles.”

For example, let’s say you wanted to message someone and schedule a time to meet up. Instead of sending a bunch of “Are you free Friday?” “No, but what about Thursday?”-type messages, you can bring up your calendar from directly within the Cola messaging app, select three open time windows, then send a Bubble presenting those three times and allowing the recipient to choose the one that works best for them.

Cola has also built Bubbles for sharing your location/estimated time of arrival, for polling everyone in the thread and for creating shared to-do lists. Yes, you can accomplish most of that with straightforward text messages, but again, it usually takes a bit of back-and-forth.

“We’re winning when we save you the need to send 10 different text messages,” said CEO David Temkin.

Cola is also announcing that it has raised $1.3 million in funding from AngelList founder Naval Ravikant’s syndicate, tech executive Brad Garlinghouse, Tribeca Angels and others.

Temkin was also the founder of Laszlo Systems, a company that built online applications. He argued that in the same way that the browser became the platform for the web, text messaging will increasingly become the platform for activity on the smartphone.

“We live in a world where the things we call phones are not phones — they are for texting, that is the main use of these devices that we call smartphones,” he said. As a result, the Cola team views texting as your basic “line of sight,” while “your peripheral vision is all these other apps.” 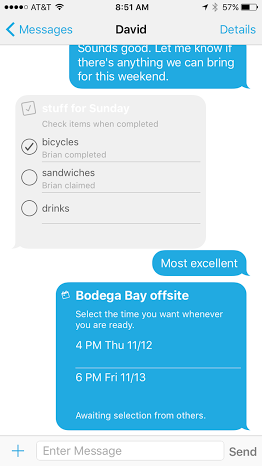 That’s why Cola is adding more functionality to text messaging, and why the bigger vision is to build an “operating system” that allows other developers who can create Cola apps (or, in the company’s parlance, Bubbles).

As an example, Temkin suggested someone could create a Bubble for instantly sharing your flight information, so the person picking you up at the airport doesn’t have to look it up. There are less obvious Bubbles in the works, including a game, he said.

Temkin knows that he’s not the only one looking at “the platformizing of messaging.” In fact, Facebook recently opened Messenger to integrate with other products — but adding GIFs and other fun content is pretty far from what Temkin and his co-founders are aiming for.

“Messaging is an enormous category,” he said. So while other companies try to make their messaging apps more fun, Temkin sees a “green field” in saving you time and making you more productive.

The startup is currently accepting sign-ups for its private beta. The app is built for iOS, but you can send messages and links to Bubbles to anyone, even if they don’t have an app, including users with Android phones.