Heaps, an app that helps friend groups connect with other groups and find parties, is expanding beyond its home country of Denmark by launching in Los Angeles.

CEO Niels Hangaard gave me a very specific origin story. He said the idea originated on a Tuesday night in Copenhagen, when he and his friends were having dinner together in one of their apartments. They spotted a group of girls having a dance party in the building across the street. Naturally, Hangaard and his friends wanted to join in, but there was no way for them to reach out, “unless you want to throw rocks in the window.” Instead, they ended up going out to a bar for “just another dull night out.”

Afterwards, Hangaard and his friends (who became his co-founders) asked themselves, “Why don’t you have a platform where you can meet like-minded people, especially people in groups?” 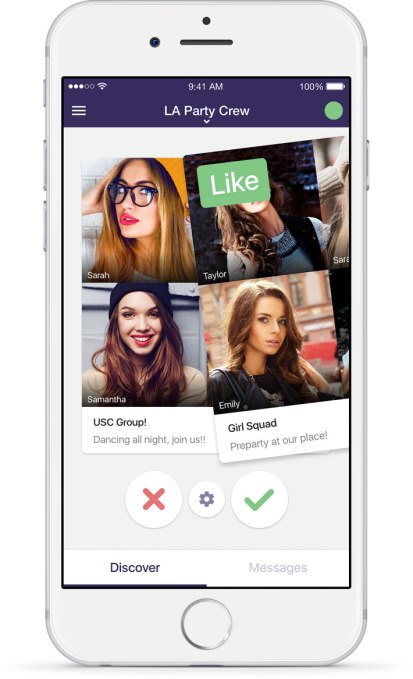 So with Heaps, users can create friend groups (which can be all male, all female or mixed gender), list their current status and then connect with other friend groups — say if you’re throwing a party and looking to find more attendees, or if you’re going out and hoping to connect with more people. For example, Hangaard said he used the app to invite more girls to what had previously been an all-male New Year’s Eve party.

The general idea sounds similar to recently launched New York startup Squad. Like Squad, the emphasis is on group socializing and partying, not dating. Hangaard isn’t opposed to the idea that Heaps could lead to romantic connections, but he said these kinds of group gatherings are a much more natural interaction than one-on-one dates.

“If I meet somebody I like, this is a more natural way to get to know them,” he said. “Because when you’re in a group, once you connect and communicate when to meet up, there’s a lot of guys that you can talk to, but you can also just have fun. It’s safe, because you’re always with your friends.”

Heaps launched in private beta in Denmark at the end of last year, with Hangaard’s team focusing on promoting the app on college campuses and enlisting 75,000 registered users so far. Although the current launch is focused on LA, the iOS app (an Android version is s now live) can be used by anyone in California.