Worried that Google has too much of your personal data, thanks to the way it has pried into your life over the years as you steadily adopted more of its services, ranging from search to email to productivity apps to YouTube and more? The company is now attempting to address those concerns with the launch of a new online tool called “Google About me” which allows you to change what information other users of Google services (aka “the world”) can see about you, including personal info like your birth date or phone number, for example.

The site began rolling out this week, but the company did not make a formal announcement. It was originally spotted by an unofficial Google-watching blog, Google Operating System, who noted that the site appeared to be a replacement for Google+ profile pages.

What the new About me page does make clear, though, is that Google has a lot of your personal info.

Thanks to the consolidation of Google’s numerous privacy policies into a single comprehensive policy back in early 2012, the company was finally able to merge user data from across its services. That means that the data it collected about you as a YouTube user, could be tied to you as a Gmail user, a Google Drive user, and so on. The advantage is that Google could better personalize your web experience, including, of course, its advertising and targeting. However, many felt uncomfortable with the fact that their often disparate data had now been combined into a single pot.

Google’s About me page doesn’t alleviate the fact that Google has a big treasure trove of personal information, but it does allow you to take some control over how that information is shared. 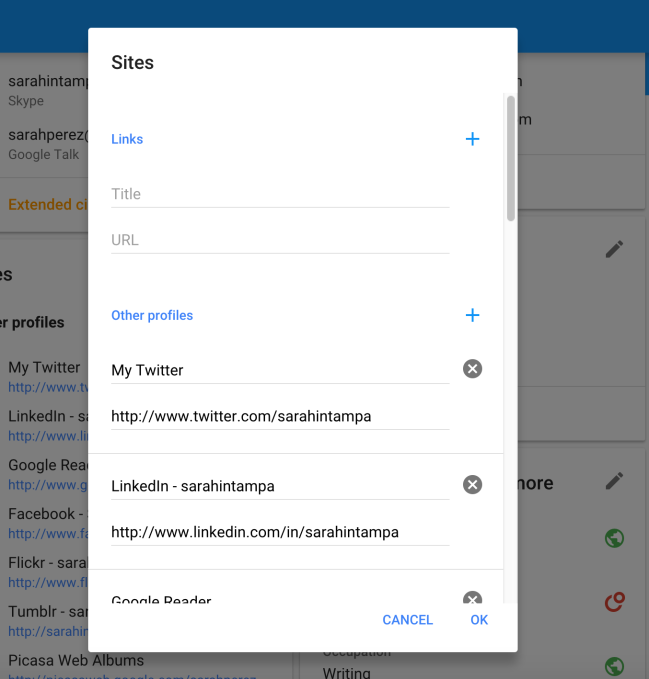 The company says the information you add or remove from your Google Account impacts a wide range of online services, including apps like Hangouts, Gmail and Inbox; on services like Play and YouTube; on Photos and Drive; on your Google+ profile, and elsewhere.

On the About me site, you’re now able to change whether you want to show or hide things like where you work, your phone number, mailing address, work contact info, places you’ve visited, and education. (Yes, you might be surprised to find that Google had collected this information in the first place!)

However, when you connect with others on Google’s services, they may be able to see things like your name, nickname, photo and cover photo, and email address, notes Google.

If you tend to protect your email address from being publicly visible, you may need to think carefully about how you plan to use Google services. The company explains that while your name and photo can be viewed by other users of Google products, your email will be made visible to others when you “communicate” with them or “share content.” That’s a vague statement with a lot of room for interpretation, and could ultimately confuse end users – especially because there’s a button to change your email to “private” which seems to conflict with this idea that your email will, in some scenarios, be shared.

Currently, making changes to the About me page are currently resulting in errors for some, as the site was uncovered a bit before it was ready for primetime.

While the site is being presented as an online tool to put you back in control, it also has another motive. The site will help to present the consolidated information about individuals that Google has collected, which was earlier the aim of its Google+ profiles. But Google+ failed as a social networking destination, and the company at last began unbundling Google+ accounts from Google accounts, and pulling back from the deep integration of the social integrations in other Google products.

But make no mistake: just because Google+ didn’t quite work out the way the company had intended, Google has still been able to collect and combine information on its users into a single, online profile. Now you can more easily see what that data includes, and wrestle a little control back for yourself.
Update: Google has offered the following statement on Google About me –