Netflix, Hulu, Amazon Prime, Birchbox, Spotify, HBO NOW, newspapers, box of the month clubs, meal services, and more: The rise of subscription-based commerce means consumers now pay for a number of items on a recurring basis. But even a few dollars spent here and there have a way of adding up, and eating into your household’s budget. A new startup called Trim wants to help you better track all the subscriptions you pay for, and easily cancel those you don’t need. And it does all this over text messaging.

The idea for the startup comes from two Yale grads, Thomas Smyth and Dan Petkevich, whose backgrounds include time spent at Redfin, the Climate Corporation, and in venture investing.

Co-founder and CEO Smyth previously worked as an investor at Core Innovation Capital, which invests in finance technology companies like NerdWallet, CoverHound, Ripple and others. The experience had him spending a lot of time thinking about personal finance, he says.

But like many founders, the longtime friends experienced the problem they wanted to solve firsthand before starting Trim. 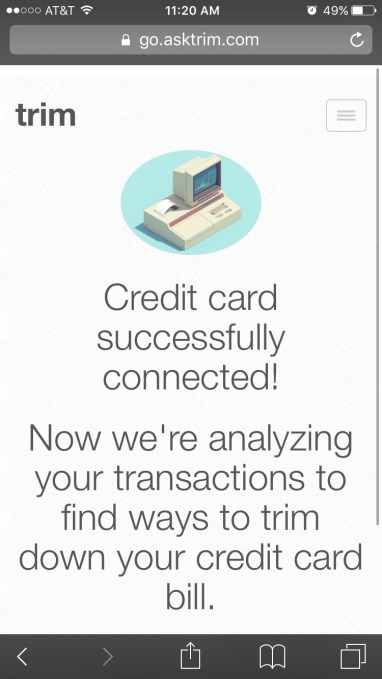 One day, while comparing their credit card statements, they realized that they were paying for a number of services they no longer wanted or needed, including a WSJ subscription and even renter’s insurance from an apartment that Petkevich hadn’t lived in for years.

They realized that a lot of people probably sign up for recurring subscriptions, too, and then forget about them. And while consumers may like to cancel some of these subscriptions (if they could remember what they’re paying for!), sometimes the money saved isn’t worth the hassle of figuring out how to cancel.

So the founders decided to solve the problem with software instead.

Powered by the API platform Plaid, Trim is able to integrate securely with 15,000 financial institutions across the U.S. to pull in credit or debit card data, or roughly 98 percent of the market. Trim pulls in your data, then identifies your subscription payments by finding those that are the same amount, or nearly the same amount, and billed on a regular basis. The software is smart enough not to pick up things like Starbucks, even if you have a daily latte that always costs the same, though.

After it identifies a consumer’s subscriptions, it offers an easy way for you to unsubscribe. 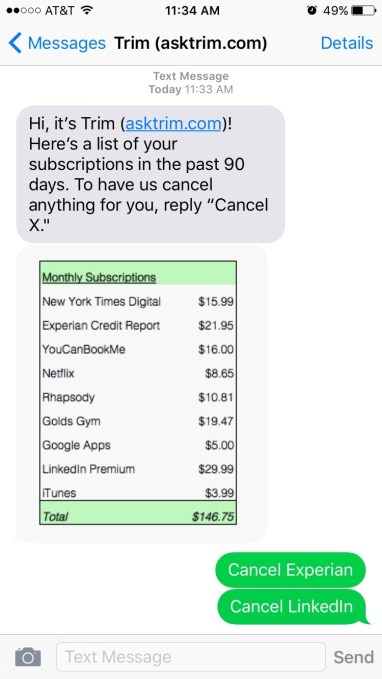 In practice, how this works is via text message. First, you’ll get a texted list of your subscriptions, followed by instructions on how to unsubscribe from those you don’t want to pay for any longer. For example, you can just reply to the text “Cancel Hulu” to cancel your subscription to the TV streaming service.

And that’s really all there is to it.

The founders say they tested the SMS service with 100 customers during a private beta, and found that almost everyone was surprised to find some subscription on their list they won’t have otherwise remembered. One of the worst offenders was Experian’s Credit Report, as it turned out, which had a 100% cancellation rate.

Assuming Trim takes off, there’s the potential to develop the product further by adding features like a web-based dashboard, a “pause” button for when you’re traveling, and even a premium version that helps users not just with their subscriptions, but with their budgets and finances, too.

This future version of Trim would be like the reverse of Mint.com. “We see ourselves as moving from pie charts to actions. Rather than having us tell you what to do in your financial life, we’d have you tell us what to do for you,” says Smyth. But for now, he says, the focus for the team is on growing Trim’s text messaging-based service.

The company has an undisclosed amount of angel financing, including from the partners at Core Innovation Capital.

When trying Trim for myself, as someone fairly responsible with my money, I wasn’t caught off-guard by any of the services. However, it does pull in things like gym memberships, which often have to be cancelled in person.

My list seemed shorter than I’d otherwise think – which is when I realized that a number of my subscriptions are actually paid for via a second credit card. (Trim, at least, lets you add more than one. And be sure to add the card you use for iTunes subscriptions, because those, too, are easily forgotten.)

Trim is not perfect. It only pulls in subscriptions billed in the last 90 days, so it could miss those you pay for on an annual basis. However, as an SMS bot, it’s dead-simple to use, and can save you a little money and a lot of time.

Trim is free to use, but may add a waitlist, based on demand.