Another software company has filed to go public: Atlassian, the company behind enterprise-focused social products like Slack competitor HipChat, JIRA, and Confluence, has filed an F-1 form with the SEC to go public on NASDAQ under the ticker “TEAM”, with the initial public offering expected to raise around $250 million. A draft registration was originally submitted confidentially to the SEC on August 21, it notes.

(From what we understand the $250 million is a placeholder with the final number to be determined later: “The number of shares to be offered and the price range for the proposed offering have not been determined,” the company notes in a separate statement.)

At a time when the IPO market for tech companies has been weak, and companies like Square are coming out of the gate unprofitable, Atlassian’s documents are somewhat more encouraging.

The F-1 notes that net income for the last three years has been positive, albeit shrinking significantly in the last year due to increased spending on R&D: $10.8 million, $19.0 million and $6.8 million for the fiscal years ended June 30, 2013, 2014 and 2015, respectively, the company says.

The company says it has more than 5 million monthly active users of its products, with 48,000 customers (which it describes as organizations that have at least one active and paid license or subscription for which they paid more than $10 per month) “across virtually every industry sector in more than 160 countries.” Some of the more high profile customers include Fitbit, PayPal, Visa, NASA, MIT, Nordstrom, Tesla, Cisco and Adobe. While the company focuses on five main products, some two-thirds of its revenues come from two: Jira, a planning and project management tool for teams (think Asana competitor), and Confluence, for content creation and collaboration (read: Quip competitor!).

While R&D may have been a drain on the company’s profits, it also tries to play up the reason why in its prospectus. “Relative to other enterprise software companies, we invest significantly more in research and development than in sales and marketing,” he company notes in a snub to unnamed competitors.

It also outlines some of its business strategy by way of a diagram: 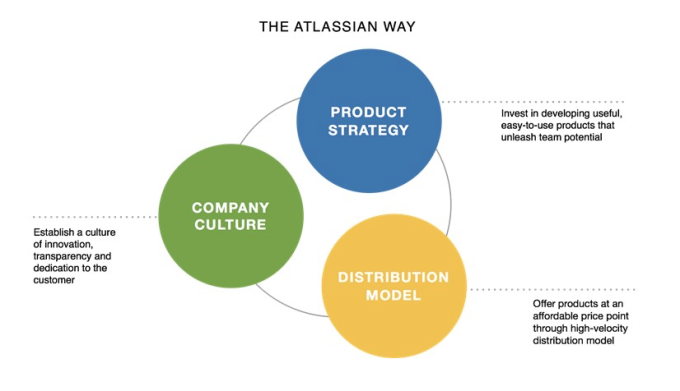 To date, Atlassian, based out of Sydney, has raised $210 million. All of its funding was in the form of secondary rounds, with a valuation of over $3 billion in its last funding from T. Rowe Price and Dragoneer.

The company was largely bootstrapped, and according to today’s F-1, while Accel owns 20 percent of Atlassian, the two co-founders and co-CEOs, Michael Cannon-Brookes and Scott Farquhar, each own 37.7%.

Atlassian was expected to file its forms this week, according to a report from Bloomberg.