Our collective thoughts of the future have moved from Deloreans to driverless cars in what seems like the blink of an eye. As technology advances, our mobility options have multiplied and changed, leading to the question — where are we going?

It all starts with cities. The urban environment is central to the future, and how we all get around is a key component. Transportation networks are the platforms for commerce, commuting, and human interaction. Technology is the medium -– whether wheel, bicycles, roads, carriages, subways, automobiles, and more–that helps us advance.

One big shift is that we’re driving significantly less as a nation than we did 10 years ago, and that trend is likely to accelerate. ‘Options’ is the watchword as people want different ways to get around. As more working adults choose to live in high-density and walkable areas where driving is not a necessity more options enter the transportation marketplace, single-occupancy vehicles will become less central to the American dream.

One in 12 U.S. households is now car free and according to a report released by U.S. PIRG and Frontier Group, people aged 16-34 drove 23% few miles on average in 2009 than in 2001—and trend lines have continued in this direction. In that same age group, only 67% of Americans even have driver’s licenses.

As major urban areas continue to grow over the next fifteen years, the United States population will grow by roughly 40 million people, from a current estimated population of 321 million to 361 million. Nationwide, this will amount to 13% population growth, but nearly all of this growth will occur within cities.

Of the top 100 most populous urban areas in 2015, 73 are projected to grow more rapidly than the nation as a whole, and 32 are projected to grow by more than 20% in the next 15 years. This growth is happening in cities of all sizes. There has been dramatic growth in mid-size cities such as Knoxville, San Antonio, Raleigh, and many others.

All of these developments and shifts will drastically alter our future transportation environment. The rapid change ahead will be impacted by technology, and there will undoubtedly be unforeseen advancements in five or ten years that no one could have predicted. 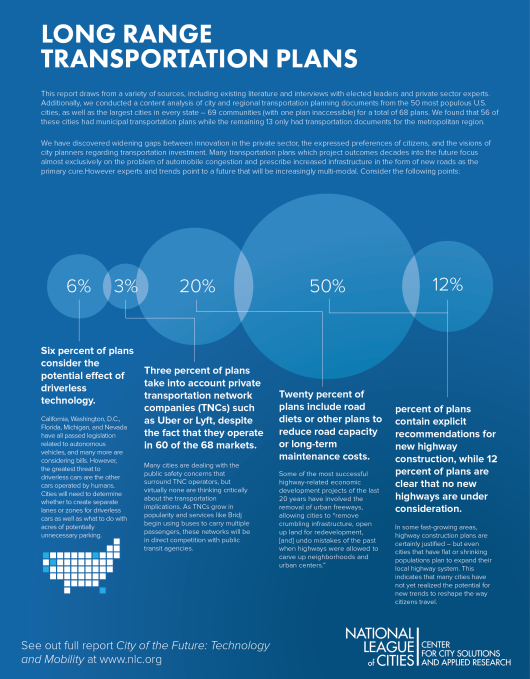 In fact, we all talk about driverless cars now as though they are a foregone conclusion, but 15 years ago it was barely on our radar screens. The private sector is significantly impacting the transportation marketplace in part because they are acknowledging and helping shape the changing demands of users.

Companies from Google to Uber and more are investing heavily in this space, not to mention the traditional auto manufacturers who are also definitely in the game. These companies are preparing for and helping to create a vastly different transportation future. By accelerating self-driving automobile production and beginning to bring it to market it will help shape the mobility dynamics of tomorrow.

Much of the change in transportation preferences can be attributed to peoples’ behavioral evolution. Travelers no longer think of themselves as users of a network, and instead have adopted an app-oriented mindset. People want to be able to know instantly, with the touch of their fingers how to get from Point A to Point B. Public mobility providers need to adapt to this new paradigm.

Mobility options across the spectrum, from public to private and in-between, already are and will continue to be greatly impacted by technology and our City of the Future: Mobility and Technology research is about what’s happening next. Demographics, infrastructure finance, public-private partnerships, and new modes of transportation are key when thinking about these coming shifts.

To help explore the public sector side, our report analyzed long range transportation plans in the 50 largest cities (and metro regions) as well as the plans of the largest cities in each state. What we saw is a widening gap between where technology is rapidly taking us in this space and where cities are currently planning to go. With the plans forecast ranging between today and 2050 it helps one analyze where priorities are now and moving forward into the future. 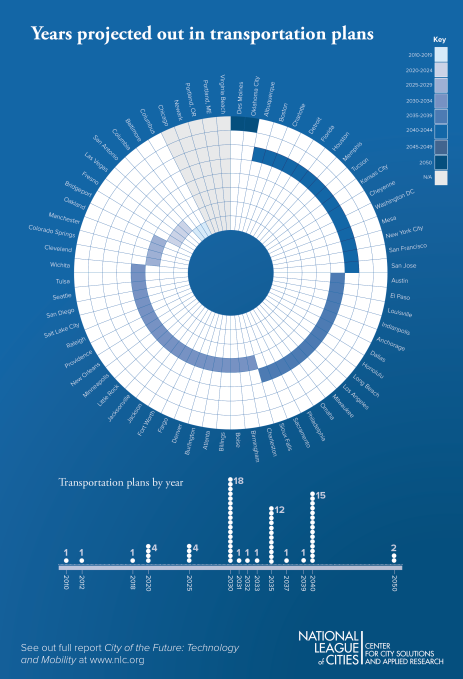 Only 6 percent of plans consider the potential effect of driverless technology. Three percent of these plans look at companies like Uber and Lyft or other players in the transportation network space—even though they operate in 60 or the 68 markets. Fifty percent of the plans contain explicit recommendations for new highway construction while only 12 percent clearly state no new highways are planned.

This doesn’t necessarily comport with what community residents are requesting, and definitely reflects in many ways the disruptive speed at which recent transportation technologies have come online. These transportation plans often take years to put together and as new ones are created or old ones are refreshed it will be imperative to incorporate the shifting mobility environment.

It is a safe assumption that we will all have very different conceptions of what constitutes transportation in the coming years. Will the Hyperloop become a reality? We’ve got cities (that aren’t ski communities) thinking about gondolas as transportation options. Likewise, foldable cars have recently been launched as a possible solution, and could be a used by individuals and as part of car services in the coming decades.

All of these ideas and more will help shape our upcoming mobility environment. The rapid change ahead will be highly impacted by technology, and the lessons of the past tell us that while we can anticipate and make reasoned predictions, the future is far from certain. At the end of the day it is always important to remember that technology is only good if we make it good, and it must focus on people first. We should all buckle up and hold on though, because it is definitely going to be an interesting ride.