Can the problem of tech gobbling up too much of your attention be fixed by buying more technology? Vinaya, a U.K. startup which started out back in mid 2013 — and is now announcing its first full product launch, fleshing out its business philosophy and detailing $3 million in seed funding — reckons so.

Investors in the startup include some familiar names, with Passion Capital’s Eileen Burbidge leading the round. Others putting in funding include former Index partner Robin Klein, Carmen Busquets, Playfair Capital, Michael Birch and several others.

Vinaya’s mission: to apply psychology research to the tech product creation process to try to build products that are more sensitive to human habits — and help promote emotional wellbeing by, for instance, enabling more controlled use of tech. Or developing tech that’s sensitive to the user’s mood so, presumably, could dial down notification pings if its owner seems stressed.

Vinaya is setting up what it dubs a “research lab” — aiming to feed insights about the brain/human habits into its product design process. The newly announced seed investment will be going towards establishing this lab, as well as scaling up manufacturing of the first product line, and product dev work on its next product (still in stealth).

“We realized there was a bit of a disconnect between the way technology was built in the startup culture and the way that wearables are built, in particular, but also digital products — and the actual academia, the scientific research, that should go into the development of these products,” says co-founder and CEO Kate Unsworth.

We live in a world where we’re expected to be online to some extent and what we’re trying to do is make that level of connectivity more customized.

“From what I’ve seen… normally what happens is somebody has a bright idea that resonates with them and then they go back and post-rationalize it and say ok let’s find the science to prove it. Maybe every now and again it’s the other way around but I think typically in these kind of mental health and wellbeing type products there seems to be a real disconnect between the real research that’s going on in academia or in research institutions and then actually finding the applicable means of getting that to the consumer.”

The startup, previously known as Kovert Designs, is not talking too publicly about the full scope of its plans, but Unsworth says the vision is to apply data-analysis to “brain activity and psychology to try to understand how people are feeling — and as a result of that the types of products that we can build to help them feel better”.

One future product, codenamed Zephyr, will be a smart home device, although the initial product is a range of high end jewelry wearables, called Altrius.

The first Altrius collection is launching in pre-order now for shipping in time for the holiday — although the first version of the product was also soft launched in a limited run last Christmas. The overall aim with the wearables is to help “hyper connected” tech users stop digging their phone out of their pocket every few minutes to see if they have any new messages.

Items in the Altrius wearable collection are made from high end materials including sterling silver, gold plating and so on, with the connected tech embedded into the ‘stone’ on individual pieces. The initial three wearables are: a connected ring, bracelet and necklace, priced at £220, £250 and £275 respectively.

The first collection is designed for women but the plan is to expand with a male line in future, according to Unsworth. Users can choose which item most suits them — and could choose to wear all three (for full #fashion) but there’s no tech-based reason to do that; only one at a time will link to the companion iOS app to function as the notification filter.

As with other notification wearables (e.g. Apple Watch) or existing connected jewelry (e.g. Ringly) the idea with Altrius is the jewelry vibrates for custom notifications (these are configured via the app) — so the user can set their own parameters for when they absolutely need to be alerted to an incoming missive.

Allowing them to — in theory — leave their phone in their bag/pocket for longer. (Of course they do still need their phone nearby/on their person as the jewelry links up to it via Bluetooth.)

One feature of Altrius which Unsworth flags up as “novel” vs other similar notification wearables is a feature called ‘secret words’, which allows users to select and provide a specific keyword to particular people — such as key colleagues, for instance — so those people can specifically override an Altrius user’s do-not-disturb settings when they really need to contact them. 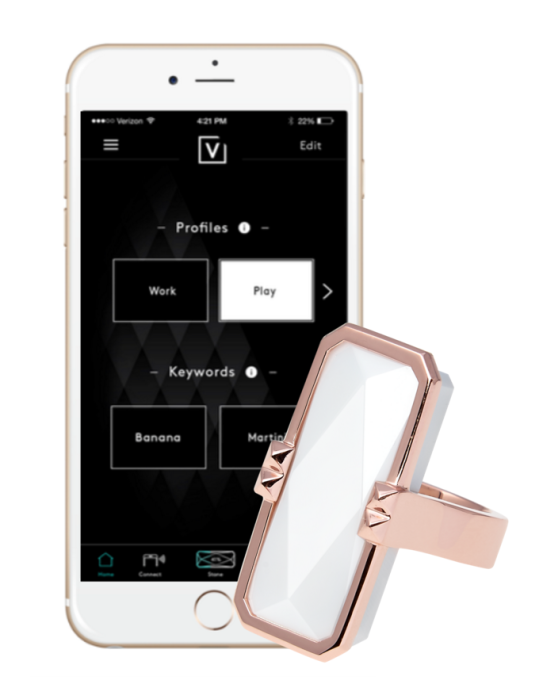 Unsworth, a former tech consultant with a maths degree, says the idea for the startup came to her as a result of her own battle to disconnect from tech. “I was managing big teams of developers building platforms and apps and websites and all sorts. Got to the point where I was just so dialed in I was online 24/7 that I just hit this tipping point and I realized I’d developed this really unhealthy relationship with my technology,” she tells TechCrunch. “It was detracting from who I really was.”

Altrius has been designed for similarly “hyper connected people to help them try and regain control of their notifications”, she says.

“It’s a collection of smart designer jewelry, it’s very high end… compared to a lot of the other wearables out there, it’s sterling silver, gold plated, and we treat it very much like a jewelry line. And the purpose of the product is to help you understand your digital habits and take control of your smartphone addiction,” she adds.

“Super simple in terms of actual functionality — it allows you to set different profiles. So I have work and play, and within each profile you can add specific people. And you can toggle on and off what notifications are allowed through from those people — so email, text, WhatsApp, phone calls. So you receive a vibration when those specific people contact you.”

Can’t people just set profiles on their smartphones to do this? And/or dial back specific app notifications? And/or set a ‘do not disturb’ feature on their phone?

Of course they can, but Unsworth argues that software-based filter features still require people to engage with their phone — and so encourage them to be sucked back into the addictive notification-checking cycle they are trying to avoid in the first place.

“The problem is that it’s not the tools that create the issue. It’s actually our own psychological behaviors,” she argues. “So it’s really like the brain is to blame, not the technology. So the brain wires itself in different ways in order to receive the rewards that your smartphone notifications give, right. It literally rewires its synapses because it’s found a faster route to receive rewards so the fact that you might have an app on your phone or you might have the ability to go into settings on your phone and set specific filters up is not really helpful.

“Because once I look at my phone my brain still wants to check email and refresh, and it still wants to check Instagram or whatever it is. So really it’s understanding the behavioral psychology and also the neuroscience behind it. And there’s a tonne of studies that show it really is the visual stimulae that gets us distracted.”

“In this case it really is a question of out of sight, out of mind,” she adds. “So if we can build products and tools that allow you to remain somewhat connected but leave the screens out of sight — so you can actually remain focused on what’s going on — then that’s proven to be really beneficial.”

What about the Apple Watch? Isn’t Altrius treading pretty similar ground there too? Unsworth argues not — dubbing the Apple Watch “an enabler” when it comes to “hyper connected/digitally addicted” tech users, being as she argues it makes notifications “more accessible”.

“For a digital addict… to have a screen on your wrist that makes notifications more accessible is only adding to the problem,” she adds.

So how big a market is this ‘hyper connected/digitally addicted’ target market for Vinaya’s products? That’s tbc, says Unsworth, who does not offer any metrics on the size of the market the business is seeking to address.

“We’ll see,” she says. “We get really good responses from parents, from young professionals, from students, but we’ve not gone on sale yet so we’ll see who it resonates with the most. It’s definitely a specific market; it’s not for everybody. Some people want to be connected 24/7. And this product isn’t for them. This is for people who are looking to find more ways to find balance in their life.”

If it’s more balance/less tech you need, then buying more tech does seem a rather contradictory message (vs, for instance, taking up meditation or yoga…). But perhaps the point is that some technology users just can’t help themselves — so when it comes to trying to switch off they’d rather shell out on more tech to remain ‘partially’ connected.

Whether that’s ultimately helping people improve their mental wellbeing by giving them the means to control their tech ‘addiction’, or continuing to (drip)feed that addiction with yet another way to stay connected will presumably depend on the person in question.

“Some people have demanded bosses, demanding jobs, some people need to be on call, maybe they’re a nurse, sick parents in hospital. We live in a world where we’re expected to be online to some extent and what we’re trying to do is make that level of connectivity more customized. So rather than being on or off we want to be able to say ok I’m now 10 per cent connected, only to emergency notifications. Or I’m 5 per cent connected, or I’m 60 per cent connected. But up until these types of products, and these types of ideas, really we didn’t have much of a choice,” adds Unsworth.