Today, Google shared their self-driving car project monthly report. Good news, there were no accidents. There were however, some interesting learnings that the team shared about how they’re training their software.

Apparently, Halloween was a big help: 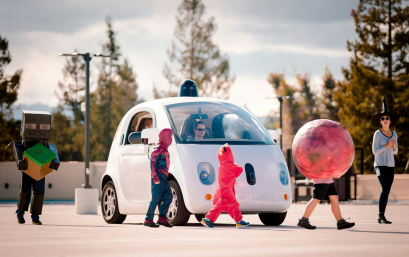 Halloween’s a great time to get some extra learning done. This week, lots of little ghouls, superheroes and even robots were running around Google with their families, so we asked them to hang out around our parked cars. This gives our sensors and software extra practice at recognizing children in all their unique shapes and sizes, even when they’re in odd costumes.

We teach our cars to drive more cautiously around children. When our sensors detect children—costumed or not—in the vicinity, our software understands that they may behave differently. Children’s movements can be more unpredictable—suddenly darting across the road or running down a sidewalk—and they’re easily obscured behind parked cars. So even if our cars can’t quite appreciate the effort the kids put in dressing as their favorite character from Frozen, they’re still paying full attention!

An update on how many miles driven and where were reported again as well:

The reports are quite fascinating and give us a peek into just how involved this futuristic, but attainable, project is. The company discussed how to keep “drivers” engaged while the car drives itself, which is an industry-wide concern. The company discussed folks in the car reaching into their bags in the bag seat for their phones, something which scares the crap out of me regardless of how accurate the self-driving car is. The message? People trust the cars. I mean, at least the volunteers they had out testing them did. They were all Google employees, because duh.

None of this is a slam dunk because hey…some people enjoy driving. Google discusses how this technology is great for commuting, which is agreeably boring ass driving. We’ll keep reading the reports while you keep paying attention to the road.

Great so in the zombie apocalypse my autonomous car with cautiously avoid the brain eating dead?!? https://t.co/OfPngJrcPd