The Amazon-owned video game streaming site Twitch is doubling down on what the company says has been a rapidly growing source of non-gaming videos on its site: creative content. Yes: like arts and crafts and music. Today, Twitch is launching a dedicated landing page for this type of content, aimed at increasing video views and improving discovery for streams focused on activities like painting, illustrations, songs, costumes, and even glass blowing.

It may seem odd for the heavily male-dominated video game streaming site to delve into the arts, but it’s a move that’s been fueled by activity the community was already engaged in, the company tells us. Creative content has been supported on Twitch for well over a year, but it was something that gamers would post to their own channels, which could make it hard to find.

Despite this, creative content had been growing at 40 percent month-over-month on Twitch, the company says – making it one of the only outliers in terms of non-gaming genres that’s seeing significant growth.

Today, there are close to 1,000 broadcasters who are now publishing creative-type videos on Twitch, and those streams are seeing 2 million people watching on a monthly basis. That’s still a smaller portion of Twitch’s overall community – the site has 100 million monthly visitors, and 1.7 million broadcasters, 12,000 of whom are partners monetizing their channel through ads, subscriptions, and/or merchandise.

The new Twitch Creative section, which will be visible on the web and mobile, will have its own directory and a carousel to highlight the most interesting content in that category. Twitch broadcasters will also be able to hashtag their titles, to better aid with discovery. The page itself is sponsored by Adobe, which has a channel at twitch.tv/adobe focused on inspiring creativity.

Seeing the potential for this new vertical, Twitch has hired a community manager for Creative, Kyle  “MonkeyOnStrike” Reddington, who was already an established artist using Twitch. An oil painter, Reddington has been immersed in the culture of the site and understands the challenges artists on Twitch face first-hand.

And Twitch is also celebrating the launch by securing the rights to stream Bob Ross‘ entire “The Joy of Painting” archive, which includes 403 episodes of his classic painting demonstration show – something that Twitch says was one the first examples of an artist interacting with viewers as part of the creative process. 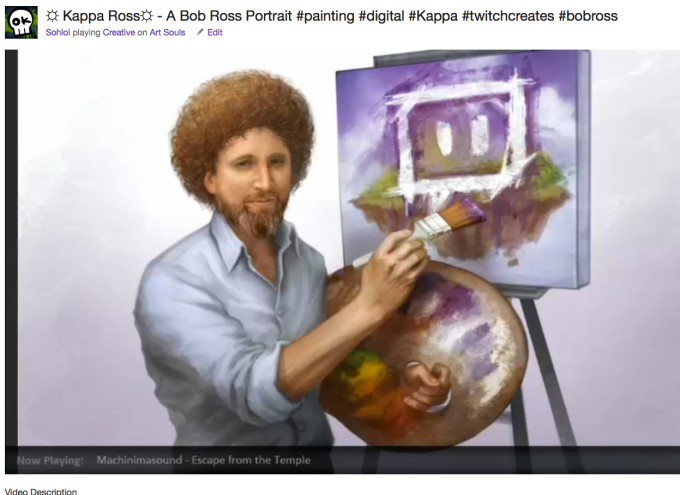 The fact that this creative content is live-streamed is notable, as well. Though the broadcasters can choose to archive videos later on, the live nature of the streams makes for an almost crowd-sourced creative process. That gives the videos a rawer, more unpolished nature that much of what’s found by creators on rival platform YouTube. The Google-owned video network has more recently been expanding into the gaming space as well, with the launch of its YouTube Gaming application, and just yesterday, a new tool to allow Android users to record and comment on their videos then publish to YouTube.

While Twitch says that it only launched this new section on the site in response to growth it was seeing, the addition could have another advantage as well. Assuming it takes off, it could attract a different demographic to the site. While today, Twitch’s user base is predominantly male – reflective of gaming culture overall – the demographic mix on creative channels is more evenly balanced, we’re told.

Some of the artists featured at launch include Geers_art (a digital painter/illustrator), Evilfx (a professional prop/costume artist), SceneOfActionMusic (a music composer) and Vieparlafoi (glass artist). The channel itself is live now at twitch.tv/creative.

Correction: There are close to 1,000, not 100,000 broadcasters on Creative. The post has been updated to reflect.