Modsy is today launching a private beta for its novel approach to home design. Using sophisticated 3D rendering solutions, the service turns photos of your simple room into the swanky home of your dreams. This startup has built a service that can bring professional interior decorating to the masses.

The service works like this: The homeowner takes several pictures of the space they want to decorate — ideally a photo from each of the room’s corners. Then, these photos are uploaded to Modsy after which the homeowner takes a style quiz about their likes and dislikes. This takes about 5 minutes and basically involves clicking on photos. Then Modsy takes over. About 48 hours later, the results are delivered.

The homeowner receives a package of media including complex renderings of their room complete with new furnishings and flooring and the fripperies. It’s a complete room makeover — and it’s your room. This isn’t an Ikea catalog of some random room. Modsy puts everything in your room.

The service also delivers a virtual reality view of the room. This VR view is a crowdpleaser. The image loads on a smartphone and the viewer can stand in the middle of the room twirling around to get a sense of the new design.

The VR view is fun, but I found after using the service, the still images do a better job of showing off the room Modsy made for me. The still images are a higher quality, and I found myself staring at them, wondering how much it would cost to buy everything in this fantasy world. But Modsy has a solution for that too.

This service isn’t free, yet the cost is pennies compared to using a professional decorator. But in this case, perhaps Modsy’s biggest selling point is the time savings — it just requires a few minutes to get a fresh take on a room. 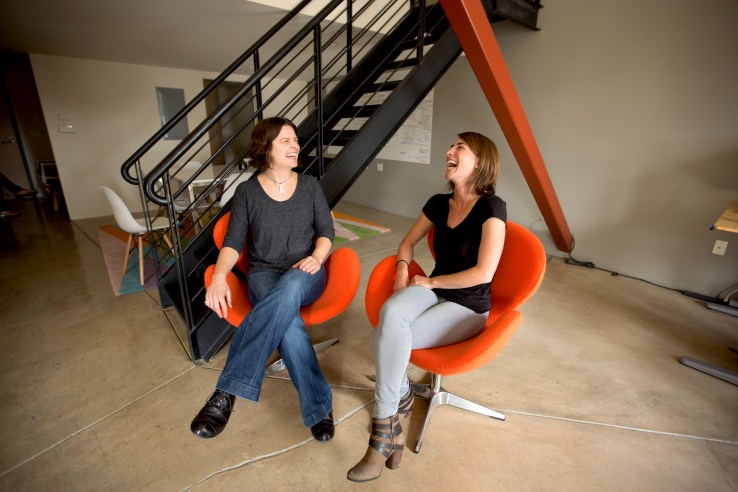 Modsy founder Shanna Tellerman has a long history with 3D platforms. She was the founder and CEO of Sim Ops Studio, a 3D game development company spun out of Carnegie Mellon and later acquired by Autodesk. Later, she worked as a product manager at Autodesk and went on to be an investment parter at Google Ventures. Tellerman enlisted the help of Margarita Bratkova who serves as Modsy’s CTO. Previously, Bratkova worked on R&D at PDI/DreamWorks Animation and ImageMovers Digital/The Walt Disney Company.

The company raised $2.75 million in the Spring of 2015 from Norwest Venture Partners, Metamorphic Ventures and others including angel investors from the home design space like Susan Feldman (Co­founder of One Kings Lane) and Eoin Harrington (SVP, Restoration Hardware).

Modsy uses a technique called point cloud reconstruction. This is the easy part, Tellerman says explaining the whole process is similar to a film pipeline with a preproduction, production and post production. The homeowner provides the service with the necessary media. The company then puts it through its rendering systems that reconstructions the room in a 3D space and then a system plugs in furnishings per the homeowner’s style direction. The company creates some of the 3D models displayed in the images. Modsy also has partnerships with retailers who provide the 3D objects.

After the rendering is complete, the homeowner gets several images and the VR view. The system allows the images to be slightly modified by selecting new furnishings. At that point, Modsy will generate a new set of renderings based on the updated selections. This currently takes about 48 hours.

Tellerman tells me that eventually Modsy will be 90% automated. She notes that every customer has a different room, though, so each render is manually reviewed. For instance, in the rendering of my room, the company had to work out the lighting caused by the room’s large windows and tall ceilings.

Modsy is launching a wait list for a private beta. At this point, the service doesn’t have a price, but eventually Tellerman sees the service costing between $30 or $40.

Nearly everything pictured in a Modsy render is available for purchase. There are links to retailers and product pages under the images and Modsy is working on integrating a purchase button directly on the site so consumers can buy the furnishings a bit quicker. Tellerman says Modsy is not going to handle inventory, though. The purchase will still done through a retail partner.

Will I use Modsy’s design? My wife and I already bought a wild sectional couch that we would have never considered before. It’s not a whole-home makeover – yet – but it’s a start and I wouldn’t have considered it had I not seen something similar in a Modsy redesign.