In the ongoing saga of big companies failing to understand what they are doing on the Internet we point you to Sony Music vs. Mitch Martinez. Mitch is a videographer who makes cool visuals and runs a 4K stock video site. A few months ago Epic Records licensed his inky video for a song called Bloodstream. Everything seemed fine, right? Good song, good video. Good fun!

Then a few days ago Sony Music sent him a copyright claim for the visuals, saying that he was infringing on their content. See what happened here? A robolawyer spotted the video Mitch licensed to Epic and said that Mitch was stealing it. 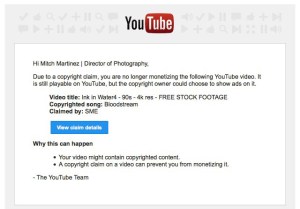 Mitch is used to fighting these and fight he did – in a kind and gentle manner. Usually, he said, things solved themselves. But not in this case…

 This is the part where the copyright claim is usually promptly dismissed. So what was different this time? A day or so after filing my dispute, I checked the status of the claim on YouTube and found a status update explaining that “The claimaint (Sony Music) has reviewed their claim and confirmed it was valid” — it was essentially saying that someone at Sony or a person that manages their YouTube account reviewed the information I provided and said, “Nope. This is definitely our footage and we own the copyright”.

Ultimately the lawyer at Epic had no idea what was going on and only after much back and forth and digging as well as posturing by Sony that they were in the right did everything become clear. It was a goofy problem turned up to the power of the Internet thanks to intractable problems.

Mitch offers a lot of great takeaway information on his site – the primary message is “Be Nice” – and it would be behoove robolawyers to be a bit more careful when throwing around licensing claims… especially when all of the paperwork stacks up against them.