Why should you, a tech person, care about Omega creating something called the Master Chronometer Certification? Well, first let me tell you what’s up.

So nice watches are usually Contrôle Officiel Suisse des Chronometers (COSC) certified. This means they’ve been tested for accuracy in various positions. Here’s the breakdown on the certification:

 Each uncased movement is individually tested for fifteen days, in five positions, at three different temperatures. The movements are fitted with a seconds hand and the automatic winding mechanisms are disengaged for the tests. Measurements are made daily with the aid of cameras.

Imagine this is a sort of finishing school for watch movements. COSC certified watches are the Harvard graduates of the watch world while everyone else comes out of University Of Phoenix online classes. 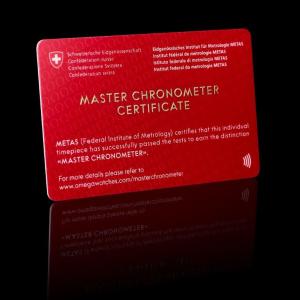 For decades COSC has been a value add for watchmakers. COSC certification reliably added a few thousand to the price of a watch, whether it mattered or not, and, if you’re cynical, you could say the entire thing was a scam in an era of smartphones and atomic clocks. But let’s not be cynical.

So now Omega, a solid watch company without a plethora COSC certified models, has added its own certification process via another organization, the Swiss Federal Institute of Metrology (METAS). This means Omega can certify their watches to within COSC specifications. Quoth the head of Swatch Group and owner of Omega, Nick Hayek, “Trust is the core of our business at METAS. We are a government agency, the leading centre for all measurements in Switzerland. And above all, we are consumer and client driven. That’s why it was important to ensure that this new standard for mechanical watches is open to every brand.”

Essentially Omega and the Swatch group are looking at an entrenched player and pulling the rug out from under them. It’s kind of dirty pool simply because COSC certification has long been a brand agnostic process and a quite lucrative one for manufacturers and certifiers. But now Omega is taking its ball and going home. In fact, they’re saying METAS is better than COSC.

 While industry-standard COSC certification remains an integral part of OMEGA’s process, the new METAS testing will effectively double the certification of each watch, giving OMEGA and other Swiss watchmakers the opportunity to demonstrate the quality and timekeeping performance of their watches to a greater extent than has previously been possible. With 8 tests carried out over 10 days, each watch must pass a range of criteria that replicate real-life wearing conditions, including exposure to magnetic fields of 15,000 gauss.

It’s a fascinating play by an old company to zip up a unique product for itself. While METAS will surely reach out to other manufacturers, going with the certification puts Omega in a unique position. They can easily and cheaply tack the price of certification onto the price of all of their watches while METAS can enter into the “big leagues” of COSC. It’s all inside baseball but it also means that their new Globemaster is Master Chronometer certified which adds a nice amount to the price and makes the watch just a bit more desirable to collectors and fans.