Gone is the little wing in Shyp’s logo.

The company is going through a major overhaul that not only changes the look and feel of the app, but also the way the entire company looks. It’s essentially a rebranding geared toward better demonstrating the company’s core competencies, CEO Kevin Gibbon said.

“We’ve been working on this for over a year, and the reason were doing that is, it’s really to reflect the powerful logistics engine we built from scratch,” he said. “When we created the brand, it was something we put together really quickly, and we wanted something that reflected the actual business.”

Shyp users can now build profiles that have saved addresses for their user names. Users can save multiple addresses — like their work and home addresses — and the benefit of all this is users can send things without having to put in an address every single time. And when receiving something, users can also designate the address where they want the item to arrive. The actual service is much the same, but with a new front-end experience.

There’s a big benefit of building in those user profiles: it helps create network effects. As the service becomes simpler for users already on the platform, it’s more likely that they will use it more for in their daily lives — and send products to non-Shyp users.

Shyp was already seeing 6% conversions from deliveries to new users, and that was basically thanks just to the label on the box, Gibbon said. The new goal is to convert even more of those users with things like text messages, inviting them to the app to track the movement of their package.

All this creates a level of virality that could continue to drive Shyp’s user growth. And the more users it gets, and the more the company makes it easier to send products, the more revenue it can generate and re-invest in the business to continue growing. Shyp has raised $50 million at a $250 million valuation, making it one of Kleiner Perkins’ biggest bets.

Gibbon said this was personally one of his biggest pain points in the service, but the redesign was born out of a concerted effort to rebuild the app and improve it and a large amount of user research, he said. The goal was not only to change the way the company looked and felt, but also how individuals understood how Shyp actually worked.

The whole redesign process was a topic of discussion for more than a year, kicking off with a conversation between VP of marketing Lauren Sherman and Gibbon. Shyps initial branding was slapped together in two weeks or so, and Sherman, who was at Taskrabbit at the time, said it didn’t reflect the actual company’s core service. Eventually, she left Taskrabbit and spearhead the redesign and rebranding of the company.

As a sort of microcosm for the redesign process, part of the testing came through a Slack channel called #freestuff, where Shyp employees would arbitrarily send things like Hot Wheels cars to each other using the new Shyp service. That was possible thanks to the saved recipients, and the company continued refining the service as more employees used it internally. By launch, a copy of The Martian had been sent around the office three times. 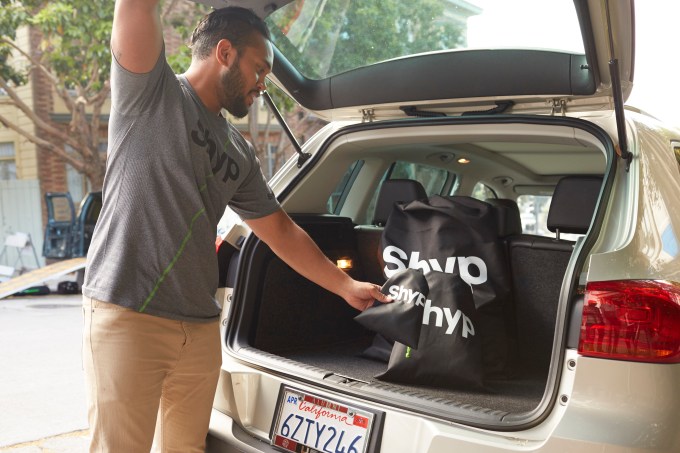 “It’s kind of interesting to see what people are giving away, it’s doesn’t seem like that big of a friction point until you remove it,” Gibbon said. “‘I never would have thought to send this,’ you’d think, and you’re seeing people in that channel people are using it more and more. That’s what we hope will happen when we release to users.”

A redesign isn’t the only thing that’s put Shyp in the news recently. Earlier this year, the company said it would convert its 1099 contractors into full-time employees — a practice it’s already enabled in Chicago and Miami. That, too, helps with the marketing, with branded vehicles and couriers that carry the Shyp experience.

A simple redesign and changes to its app might not be enough to turn it into a juggernaut — building a network, for starts, requires people to sign up in order to drive that viral loop. But Shyp says its customer base grows 20% month over month, and the number of shipments it’s done have increased 600% in the last 12 months. (These stats are semi–vanity, as there are no core numbers, but it still implies growth — and this is also a company that is only a few years old.)

And the idea of owning the entire end-to-end user experience isn’t entirely out of the realm of possibility. One thing to imagine: setting a specific time to receive a package, rather than having to leave it with a front desk (or run the risk of it getting stolen, if you live in a large city).

“This is really a stepping stone toward that,” he said. “One of the biggest friction points on the delivery side is you don’t know when someone’s home, you don’t know where to really deliver an item. The only relationship with a package is the address printed on the outside of the box. Bringing the recipient into the process, we’re able to potentially in the future ask people when they want something delivered, bringing the flexibility to do things like deliver to a GPS location, and do some really amazing stuff.”