Apple’s iOS 9.1 update, which yesterday brought support for new emoji to users of Cupertino’s mobile devices among other tweaks, also flicked the launch switch on Apple News for users in the U.K. and Australia.

Prior to this the personalized news service was couched as being tested in these regions.

With iOS 9.1 users will now get the News app on their homescreen, which lets them tap through set up to customize reading preferences — by choosing specific publications and also, if they wish, specifying particular topic preferences to power the content that populates the app. The more publications and topics a user chooses, the more granular the preferences Apple’s News app offers.

Apple says U.K. publishers featured from launch include newspapers such as the Times, The Sun, The Telegraph, The Guardian and the FT, the U.K.’s public service broadcaster the BBC, plus U.K. magazine titles from publishers such as Conde Nast and Haymarket. This is in addition to U.S. publisher content.

Apple is not the only phone-maker moving onto editorial territory of course. Last month Samsung inked a strategic partnership with European publisher Axel Springer to build aggregated news content for European users of its devices. (While a prescient HTC launched a personalized newsfeed on its Android devices back in 2013, via its BlinkFeed homescreen UI.)

One thing to note with Apple News is this feature is (apparently) not related to the newsfeed that automatically appears on the iOS search page when a user swipes right from their primary homescreen. 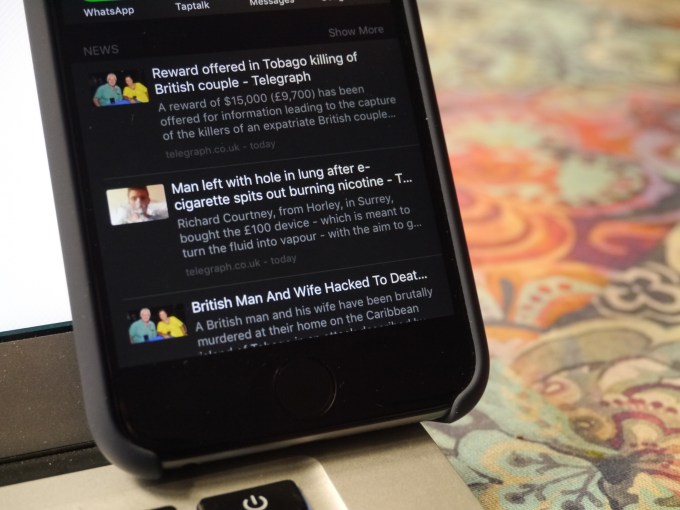 This bizarrely random feed of news can’t apparently be customized directly by the user — beyond being automatically configured to their language/country, and presumably reflecting their Siri searches over time. It does not appear to reflect their stated Apple News editorial content preferences (but we’ve reached out to Apple to ask for confirmation of the algorithms in play here — and will update this story with any comment).

Although not immediately obvious, it is possible to disable the search page newsfeed entirely by switching off Spotlight Search on the General > Settings page. However doing this also turns off Siri Suggestions entirely. So it’s something of a sledgehammer-to-crack-a-nut approach. But hey, at least there’s a way to kill the feed if it bugs you.

It does seem a bit of an oddity for Apple to launch two newsfeed options in iOS 9 — each with apparently different personalization mechanisms. Perhaps it’s an experiment to see whether human-specified curation is a better editorial strategy than machine learned guesstimates of the type of content someone might like to read.