It’s easy enough for IT costs to get out of control. That’s where Numerify, a software service that helps large companies keep track of choke points and better manage their internal IT services, comes in.

The company raised $37.5 million in venture financing led by Tenaya Capital, with Sequoia Capital and Lightspeed Venture Partners participating. Numerify’s goal is basically to make IT more efficient by monitoring operations like support tickets, and ensure that the costs don’t spiral out of control and departments are still able to help employees in a timely manner. Basically, making sure IT departments don’t lose sight of the whole reason they exist.

Here’s an example of how it might work: service desk employees may find themselves repeatedly dealing with tickets for resetting passwords. Using Numerify, the company can map the origin of all of those reports back to an event — like a software update that requires employees to reset their passwords — and help remove those chokepoints in the future.

“These are all illustrations of how you can use analytics to streamline your service delivery, through an early warning system like a backlog, or through reflective analysis such as understanding what types of incidents are best suited for a self-service paradigm versus others,” CEO Gaurav Rewari said. “It’s using analytics to really optimize your service delivery across the board.” 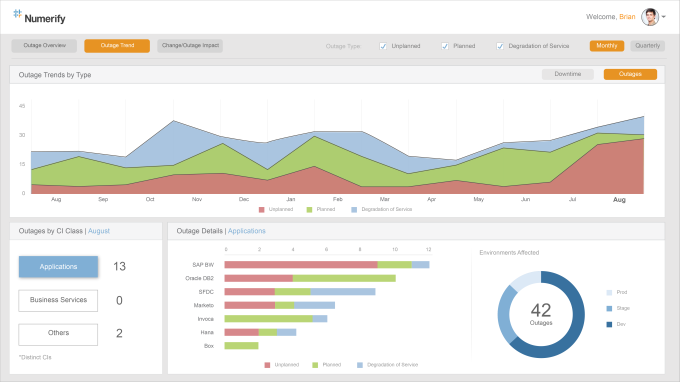 Numerify plugs into services like ServiceNow to analyze the raw data in underlying ticketing applications, calculating each day where backlogs are. And then it keeps that information, allowing companies to compare future dates with that data in order to better divine chokepoints in the IT service line that it can then address.

Another service the company provides, for example, is when to deprecate certain assets. Rather than simply tossing equipment on specific cycles, Numerify identifies underperforming assets and recommends when to replace them, in theory also lowering IT spend at larger companies.

Taken together, the goal of a company like Numerify is to help larger companies operate in a leaner, more streamlined manner internally. That gets increasingly important as companies get larger and larger and IT becomes an increasingly large portion of their overall costs. Companies want to ensure that they run more efficiently, but it gets difficult as more and more people are brought on board — leaving room for more and more issues to pop up.

But at the same time, as companies get larger, they may find themselves wanting to build their own internal IT services — leaving room for a large competitor for something like Numerify. The counter argument for Numerify, according to Rewari, is that it’s a cloud-based service that they can handle and update, rather than requiring yet another layer of IT spend. There are also tools like Splunk, which track basically everything in the data center — but they might not be quite as focused and effective as a tool like Numerify.

“They do a data dump from their underlying service management platform or ticketing software, and some long-suffering analyst will manually put it together into a report that a CIO asks for — it takes blood sweat and tears to produce that spreadsheet,” Rewari said. “And god forbid they have a second question, then it’s just manual work to build that again. We detected that in a lot of early conversations we had. That’s where we sensed this opportunity. It’s a living system, you can ask new questions and slice and dice on the fly.”