Hoverboards are real, right now, not just in Back To The Future. Today Arx Pax showed off version 2 of its magnetic levitation Hendo Hoverboard that glides above copper flooring.

The big advancement is that the mag-lev motors are tilted in towards the board to give it traction so you can shift your weight to somewhat steer its direction. Version 2 has better battery life and eliminates the loud whining noise from the first Hendo Hoverboard showed off last December. There’s also a remote kill switch in case it slips away from you. 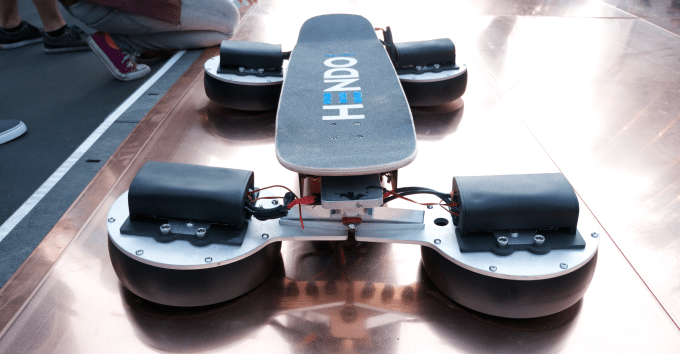 Thanks to hands-on feedback from skateboarding legend Tony Hawk, it no longer looks like “a lunch tray”, as he said. The Hendo now has a skateboard deck on the top with the motors flung out to the sides so it’s more obviously a board that basically flies. Arx Pax co-founder Greg Henderson says “Getting Tony’s feedback made a huge difference in our design approach.” Hawk was on hand at today’s unveiling in Los Gatos, California. He made riding the Hendo 2 look easy, as you can see in the GIF above. 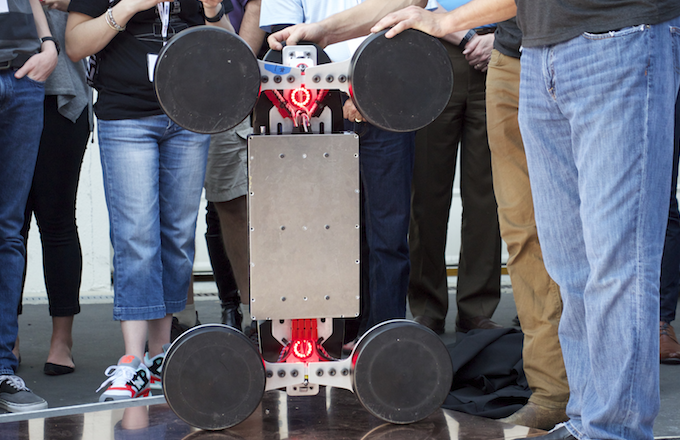 To be clear, none of the Hendo Hoverboards can run on the street. The magnets require a copper flooring to repel off of in order to hover. And they basically just coast in whatever direction they have momentum. So you push off the ground with your foot, and hover until you’re out of runway. Still, Arx Pax raised over $500,000 in its Kickstarter, doubling its goal, and it sold 11 of its $10,000 boards.

But Arx Pax says it won’t be selling a consumer version. The hoverboard was just a proof of concept. Instead, Arx Pax sees itself as a developer of “Magnetic Field Architecture” that underlies hover engine technology that it will sell for a variety of use cases including structural isolation to protect buildings against earthquakes, industrial automation, transportation, and sport.

Partners will create the final products. NASA has expressed interest in hovering for controlling micro-satellites, and participants in SpaceX’s Hyperloop competition will be able to use the MFA tech.

Hopefully Arx Pax or one of its partners will figure out how to make a hand-held remote-controllable version of the board that you can drive in any direction you want. But today, on the date Marty McFly went to the future and hoverboarded himself, I think he’d be proud of Arx Pax’s progress.