Squad is betting that the best time to meet new people is when you’re already out and about with friends, primed to meet other groups of friends.

The New York City startup is officially launching its iOS app today, and it’s also announcing a raise of $1.7 million in seed funding from Lerer Hippeau Ventures and First Round Capital.

To use the app, you form a squad with anyone you’re going out with on a given night. Each of you has your own profile, and you can chat internally with your squad, but you can also look at other groups and swipe yes or no to indicate whether you’d be interested in meeting up.

So is this basically just Tinder for groups? Not exactly. Founder and CEO Adam Liebman said the idea isn’t to create a dating app, where there’s inevitably lot of weight (romantic, sexual, whatever) on the meeting. Squad is designed to facilitate more casual meetups — sure, it could lead to dating or a hookup, but that’s not the main goal.

“Do I want to go out and have a guaranteed good time with friends and probably don’t meet that special someone?” he asked. “Or do I go out on a date, where the chances that they’re our soulmate are very slim, but there’s this weight that explicitly hangs over you.” 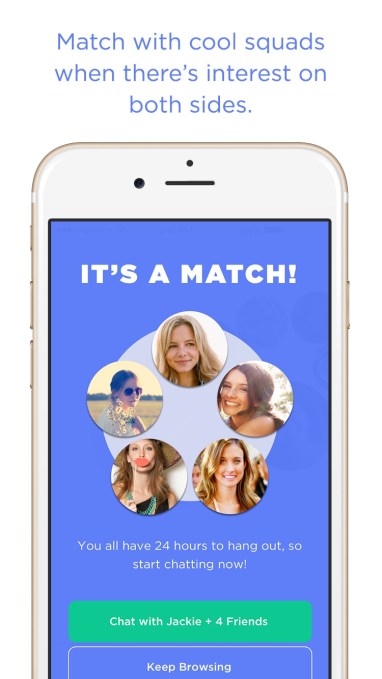 Naturally, Liebman is in the “good time with friends” column. He said the idea came from a trip to Montreal, where he “hacked Tinder” by turning his profile into a group profile that allowed him and his friends to meet new people while traveling, an approach that led to interactions that were “fun, organic and not creepy.”

If you’re like me, you’re already wondering who is or isn’t in your “squad,” but don’t worry — it’s not permanent. Squads are, by their nature, ephemeral. As Liebman put it, “A squad is who you’re going out with.” You can have one squad tonight, and a different one tomorrow. Similarly, the connections between squads will only last for 24 hours — so you’ve got a deadline to make plans and share contact info.

Liebman gave me a bit more detail about how the app works, like how there’s an internal chat within squads but also chats between different squads. At a certain point, it started to seem like a lot of work just to connect with another random group of friends, but Liebman argued that it’s meant to be “analogous to how those dynamics play out in real life.”

Think of the times you’ve been out with friends and started chatting up another group at the same bar. Or when you’ve been with one group of friends and started texting someone to convince them to come over, and maybe bring their friends too. That’s the basic idea here, just in an app, and not limited to your bar or your social circle. 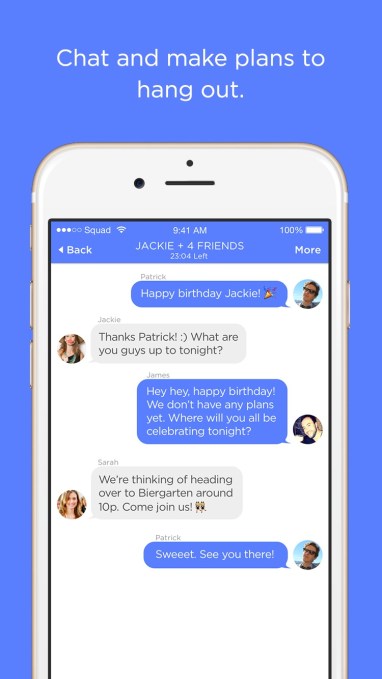 Liebman contrasted this approach with group dating apps like Grouper, where there are usually two people (one from each group) who’ve connected, and they’ve brought their friends along for the ride. The problem there, he said, is that even if the date ends up going well, “two-thirds of the people there are going to have a poor user experience.” And the group dating approach is more formal than Squad’s, with a designated time and place (and usually the expectation of unisex groups, while Squad’s squads can be mixed gender).

Liebman emphasized that with Squad, there are “no strings attached.” If you meet up with another squad but the two groups are “not vibing” and one of them wants to leave, well, no big deal. Heck, it’s fine if you try to meet up and they never show up at all, because even in the worst case scenario, “You’re still having your night out with your friends.”

The Squad app is free. Liebman said the current focus is on “creating a great product,” but eventually, he plans to make money through brand advertising, as well as promotions from nearby businesses and events.

Update: Squad says its group-matching only works in New York City for now, but there are plans to add other major cities later this year.