Apple CEO Tim Cook yesterday may have been touting the number of Apple Music music paying subscribers – 6.5 million, but at the same time rival Spotify was quietly hitting a milestone of its own. The company’s music streaming app just moved into the No. 1 position on the iPhone App Store’s “Top Grossing” charts for the first time in the U.S.

Previously, according to data from App Annie, the highest rank Spotify saw on the “Top Grossing” charts stateside was No. 3., which it hit earlier this year and maintained in September. It fared better in other markets, however – for example, in Spotify became the No. 1 Top Grossing app in the U.K. that same month.

This slight bump could be due to a number of factors, including the launch of the new iPhone 6s and 6s Plus devices, which could also be boosting downloads, and subsequently, conversions within popular mobile applications like Spotify. And it could just be benefitting from the rollout of Apple Music, which helped to introduce the idea of on-demand streaming to a wider audience of iPhone owners, who may have then compared the other options on the market and decided to shift their subscriptions over to Spotify.

And, of course, the timing of the bump is also notable as it comes following the end of the Apple Music free trial. For those who signed up with Apple Music as soon as it became available, their trial period wrapped up at the end of last month. (Apple’s service, which doesn’t have a free tier like Spotify, Pandora and others, instead let users try it out for free for three months, before having to pay the $9.99 monthly fee.)

A month after the service launched, Apple said it had 11 million trial members.

However, as Cook’s remarks suggested, Apple apparently lost millions of Apple Music users when the free trial period ended – around 40 percent of its user base. That’s actually a decent conversion rate for a new service, but the lift in Spotify’s Top Grossing ranking indicates that possibly some of those early Apple Music users are now testing out a different service instead.

But time will tell how many of those 6.5 million Apple Music paying members are “accidentally” paying for the service – meaning, they forgot to cancel their subscription and won’t realize it until later when they see a bill or bank statement.

For comparison’s sake, Apple Music has 15 million total users, including those on free trials and paying customers, but Spotify has 20 million paying users out of over 75 million active users, according the most recent public data from the company, released back in May.

It’s also worth noting that other music streaming apps, including Pandora, SoundCloud, Rhapsody and Rdio, saw their rankings, including grossing rank, staying fairly consistent in the days since the Apple Music trial period ended. Pandora, for example, is today the No. 4 Top Grossing app on iTunes, which is not a big change from where it was in September (at No. 5, most of the time). 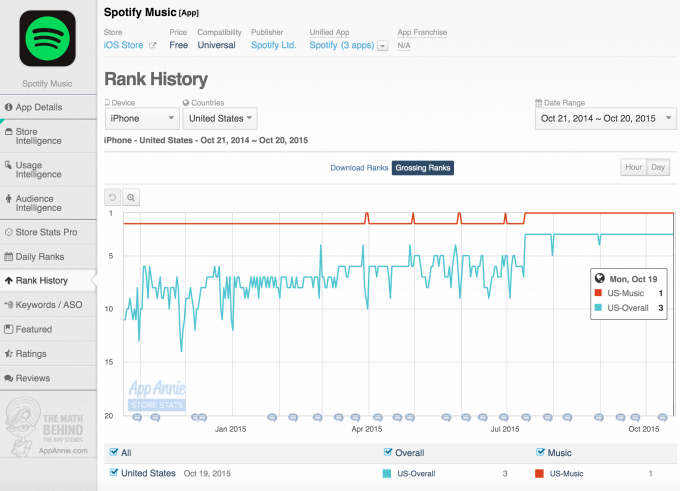 In App Annie’s August index, Spotify was No. 7 in the U.S. for revenue, for iOS and Android combined. For iOS only, it was No. 4 for revenue. With Apple Music subscriptions kicking in (and with some users abandoning the service), it will be interesting to see how those ranks change going forward.

“Based on our app usage data, being part of the Apple – or Google or Facebook – app ecosystem is not a guarantee to be a smash hit. There are going to be some headwinds in terms of getting a read on Apple Music’s success with this initial 3-month free trial,” said Danielle Levitas, SVP of Research & MarCom for App Annie, earlier this month. “Now that subscriptions will start being paid through the app we should see it on the revenue charts going forward.”

But for Spotify, it may be a case of a “rising tide lifts all boats.” That is – Apple Music may not steal Spotify’s paying subscribers, but rather bring it more exposure.

“There is still a lot of opportunity to expand the market,” Levitas added. “Pandora had a first mover advantage and even though other services have emerged in recent years – e.g., Spotify – Pandora still holds a leading share of the market. We believe that Apple’s music service is more likely to expand the music services market vs primarily cannibalizing existing subscribers,” she said. “They have access to millions of people that own an Apple device, many of those consumers have yet to subscribe to a music service.”

Spotify has flirted with the number one Top Grossing rank before. Earlier in October, it held the spot for a few hours, but not for a sustained period of time that would allow the move to register on third-party analytics services like App Annie. It remains to be seen how long Spotify can hold on to today’s #1 Top Grossing spot, though.