Publishers are in danger of becoming dumb content in the smart pipes of platforms like Facebook and Twitter. The quest for smoother user experience portrays actually visiting a publisher’s site as friction. With content consumption being redfined, there’s plenty of eyeballs out there, but it’s getting tougher to win the hearts of readers.

Previously, the platforms were willing to pass people on to a publisher’s website where they could show ads, promote their other posts, and forge a relationship worthy of a subscription fee or frequent repeat visits. The platform just wanted to be a gateway, and run ads between these chances for discovery. Now, the platforms want to absorb the Internet, becoming the destination — a sit-down restaurant, not a take-out counter. Rather than hoping users come back to discover more content after they consume it elsewhere, platforms don’t want people to ever leave. They hope this full-service experience will make content consumption more convenient for readers.

The latest example of this is how Twitter’s newspapery Moments feature assimilates the content of tweets it aggregates on mobile, but hides the vital link back to the publisher’s website without users even knowing. Should publishers give up the milk if Twitter doesn’t want the cow?

An original tweet with text or a photo and a link appears as just text and/or photo in Twitter’s mobile apps. The trail back to the publisher’s site where it could actually earn the money to create more of the content Twitter is aggregating gets buried in the rich media bushes.

If a user even suspected there might be more to the tweet, or wanted to get a deeper look at a story, they better get ready for some finger gymnastics. Here’s how it works in Moments on iOS.

First they have to tap on the Moments screen to reveal the feedback buttons. Then they have to know to tap the nondescript ‘three dots’ more button in the bottom right corner. Then they have to select “View Tweet” from a list of seven options including “Share this moment” and “Send via Direct Message”, which benefit Twitter, as well as “Mute”, “Block”, and “Report”. The only other option helping the publisher is “Follow @[whoever posted this tweet]”.

Finally, once viewing the original tweet, readers are actually shown the link stripped out by Moments. Then they still have to wait for an in-Twitter mobile browser to load the site. On web the links are shown inside Moments, but the vast majority of Twitter’s usage is on mobile.

If it sounds like Twitter doesn’t care that much about pushing traffic back to a content’s source, well that’s because it has bigger fish to catch. Specifically mainstream non-users. Twitter is desperately trying to create a simple, visually exciting way for people to experience the best content on its platform without all the work. That’s how it thinks it will acquire users who avoided it or churned out because of the complexity.

But that prioritization of a smooth, uninterrupted Moment reading experience puts referral traffic on the back burner. Twitter doesn’t want you to leave. Instead, it wants you to look at the photos and read the headlines a publisher worked to create, but skip their link.

That pressure is reinforced by the annoying, seemingly immortal blue dot on the Moments tab. It nags for your touch, then reappears minutes later, delivering an unsettling sense of incompletion.

When asked, Twitter contended that Moments is additive, bringing a new breadth of distribution to full tweets that still work as normal. But the issue here isn’t breadth, it’s the depth of the relationship publishers need to have with their audience. At least Twitter admits that the issue of blue dot anxiety is firmly on its radar. The company tells me it soon plans to start using additional signals to determine when it’s right and wrong to regenerate the dot.

The Weakening Bond Between Readers And Publishers

Twitter’s certainly not the only platform in the quest to become a destination more than a portal, as The Awl’s John Hermann investigated. Facebook’s Instant Articles similarly mediate and obscure the relationship between the publisher and the reader.

Consuming a traditional article on the publisher’s site soaks you in its flavor and style, providing eye-catching suggestions of what else to read, sign-up forms for newsletters, or options to pay for a subscription. But on the sterile, yet fast-loading Instant Article pages, the temporal user experience is the focus of a clean, white canvas. Opportunities to fall in love with the publisher are few and far between. They’re just another ranch producing meat for Facebook’s sausage factory.

Below you can see the bottom of The Atlantic’s article “The Execution of Clayton Lockett”, on the left as a Facebook Instant Article, and the right as a traditional mobile website. The Instant Article’s end features none of the ads or calls for subscription, and few of the recirculation opportunities found on the mobile web.

I grilled Facebook’s head of ads and Pages Andrew ‘Boz’ Bosworth about Instant Articles at TechCrunch Disrupt SF last month, as seen in the first five minutes of the video below. He said Facebook tries to focus on the consumer experience first, and that good content will win publishers added distribution.

But thin, wide reach doesn’t produce the loyal readers that publishers need to survive. At least when I pressed on the need for better help recirculating Instant Article readers to a publisher’s other content, he said ” Yeah, that’s super interesting. That’s exactly the kind of thing we’re looking at.” When I asked Facebook today, it said “Every Instant Article has links at the bottom to stories from that publisher”, but didn’t have any more to share about enhancing ways to connect publishers and readers. 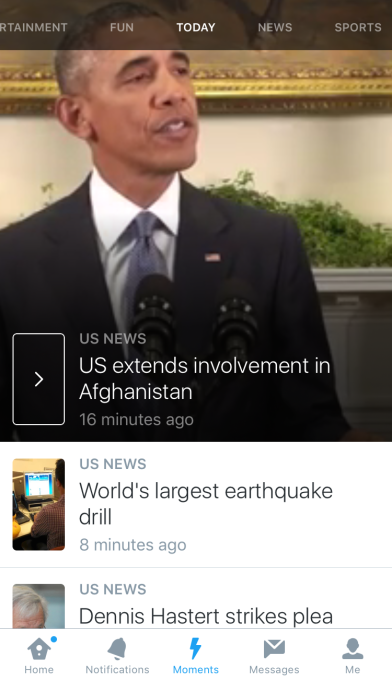 If Twitter wanted to show it cared, it could put a button opening the hidden link onto the feedback screen that pops up after the first tap on a Moments tweet rather than burying it behind several more taps.

From one perspective, you could say the clean up of the mobile news reading experience by Twitter and Facebook is a win for the user. They’re hiding ads, promos, and sign-up requests that clutter websites and make them load slowly. People don’t have to forage through links to find what they want.

And since these platforms drive so much traffic and brand engagement, the publishers are addicted and have little leverage. If they don’t cooperate, one of their competing outlets will.

But without ways to convert a platform’s users into loyal readers, the sustainability of publishing comes under threat. Publishers need to push portals to loosen their grip and strengthen these loyalty acquisition opportunities. Otherwise the content stream could be choked out at the source, no matter how smart the pipe is.