Lisagor, also known on the CB as Lonely Sandwich, and his partner have created a series of helpful videos to help you navigate the world of computer. In these videos you will meet amazing people like the man of Reddit and two people who are making computer art. It is a fascinating look at what could be the most important fad of the 20th century.

The show is set in 1983 and styled to look like a popular video series called Computer Chronicles. In Lisagor’s series, however, multiple people talk.

These videos are Tandy-compatible. You can see more of the show here.

We sat down with Lisagor and his partner at a Big Bite sandwich shop to discuss the show and the future of personalized computers. He was very nice.

TC: What are these videos about? Who are they for? Children?

AL: These videos are for 1983’s typical technology consumer who is interested in staying up-to-date on all of modern technology’s trends and offerings from 1983 and beyond (up to and including 2015).

TC: Tell us a little about computers?

AL: Steve Jobs said that computers are like bicycles for the mind, by which he meant you can literally ride them places. 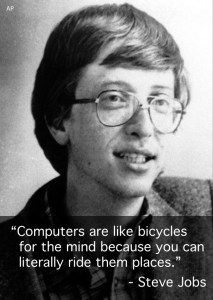 TC: What is the future of the Web?

AL: The future of the web is more of everything, just louder.

TC: Why are you making this show? Are computers a fad?

AL: I think we speak for our fellow futurists when we say that computers are here to stay for at least the next decade.

TC: What is the future for the show? What kinds of computers may exist soon?

AL: Computers can be anything, from brown to light beige to grayish brown. Some day in the future, there might even be computers with “Computer Show” written on them, just like your favorite lunchbox.

TC: What other people do you expect to have on the show? Any clergy?

AL: Funny you should ask, we have an upcoming episode called “Computers and God” where we invited a panel of representatives from all the word’s religions (even the kooky ones) to weigh in on whether God likes computers and what computers games He plays.

AL: In a way, everything is computers. Anything with a Delete button is technically a computer. Pinball has two, so it’s technically a supercomputer.