While companies have long been using social media influencers as native advertising, these influencers have traditionally been limited to online “celebrities” known for their large follower base.

Although often successful, this strategy forces companies to bet on quality over quantity, essentially deciding that one tweet from someone with 100,000 followers will lead to more conversions than 1,000 separate tweets from people with 100 followers each.

Boostinsider, a platform that lets brands pay influencers for shares on social media, disagrees with this approach.

Launched at TechCrunch Disrupt SF 2015, Boostinsider provides an easy way for brands to create a campaign targeting all types of influencers, ranging from a college student with 50 Twitter followers to a fashion icon with one million Instagram followers. 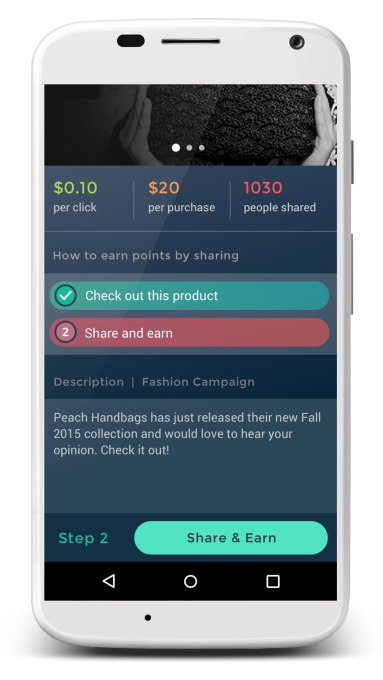 The company, which already has 80,000 influencers on the platform and has worked with brands like FabFitFun and Kim Kardashian Hollywood, just closed a $1.5 million seed round led by Fine Charm Ventures and Kyline Fortune, a new Silicon Valley fund led by ex-Twitter employees.

Here’s how it works: Brands first create a campaign asking influencers to share anything from an app download link to a product on an e-commerce site. Boostinsider then creates a custom referral link for each influencer, who is paid based on how well their link performed.

While Boostinsider allows companies to create campaigns sharing any type of link, they have seen strong traction with brands creating campaigns for app downloads, for which they typically pay anywhere between 50 cents and five dollars per download.

As advertisers continue the shift towards social media, Boostinsider’s platform could be the key to democratizing influencer marketing, which may actually be more successful in the long run.

After all, someone sharing a relevant product link with their 100 closest friends will probably get more meaningful engagement than a celebrity pushing out a generic, forced advertisement across their social channels (I’m looking at you, Kim Kardashian).