AngelList, the investing platform that has scaled to support $205 million in investments across 650 startups including Uber, is aiming even bigger.

It’s likely the largest fund that has ever existed to fund companies at such an early stage. Typically, the larger a fund gets, the more it must move toward growth- and later-stage investments to earn a return.

“Firms often raise more money to get more fees. But with our model, we can just add more syndicate leads so we can keep putting money into the same kind of companies at the same stage,” said AngelList’s co-founder Naval Ravikant. “CSC Upshot is about Chinese LPs expanding globally and showing that Chinese companies can go out globally and compete in a way that gets them exposure at the very earliest stage, instead of waiting for the Series D round.”

AngelList has helped the fund pick out 50 of the top leads on the platform, who already have a track record of identifying high-performing deals. Over the past two years, the company has built a “Syndicates” model that lets well-connected and high-performing angels draw in more capital from their personal network. Today, AngelList has 4,400 investors operating across 165 syndicates.

On top of following these 50 leads, CSC Upshot has its own internal tools in the AngelList platform to vote together on whether to follow a deal or not.

Ravikant said he’s aware of the risks that poorly-deployed capital could distort and inflate the market. The average valuation on AngelList’s platform has risen to $5.1 million in the third quarter of this year compared to $4.5 million three years ago. Because of the sheer amount of seed-stage capital that has come into the market in recent years, the odds have become increasingly tough for companies to “graduate” to a Series A round, according to Mattermark, which studied cohorts of startups from 2008 until the present day.

“If it’s handled poorly, it could change prices and flood the market,” Ravikant acknowledged. “We were actually offered closer to $1 billion and we thought that was too much money. Even the $400 million will be spread out over six to eight years. Maybe the first year, we’ll deploy $20 or 30 million as we figure out the model, and then scale it out.” 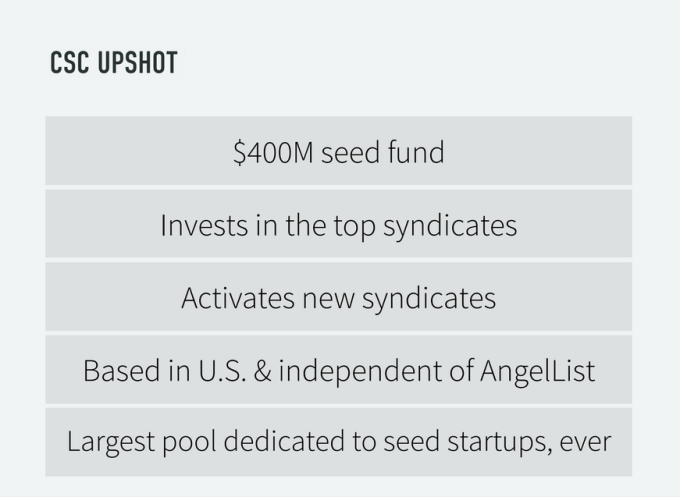 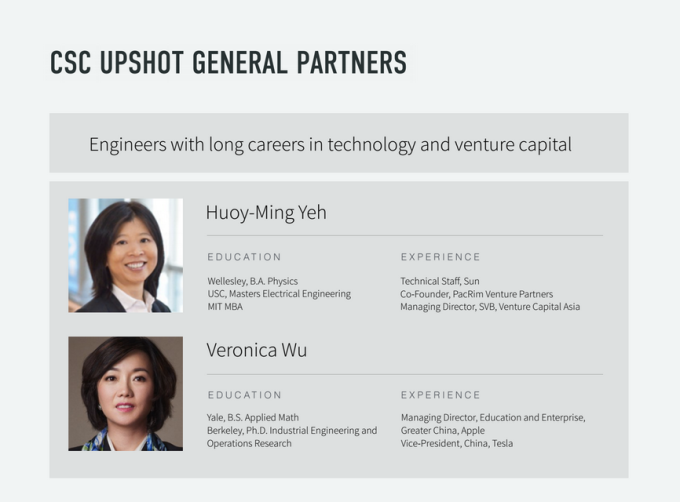 The funds come at a time when Chinese companies and investors are putting more money to work inside American companies. Alibaba invested $200 million in Snapchat earlier this spring while China’s Uber-rival Didi Kuaidi put $100 million into Lyft a few weeks ago. With broad declines in Chinese public equity markets, capital is flowing and diversifying into other opportunities instead.

While the big later-stage deals have been very visible, it’s more difficult to track the flow of overseas seed-stage capital into companies.

“Early this year, Chinese LPs started showing up in our office. I think everyone who is already in Silicon Valley think that they already have access to the best Silicon Valley deals because they know so-and-so. They take it for granted,” Ravikant said. “But if you’re sitting in New York, Boston, Abu Dhabi or China, you don’t have this access.” 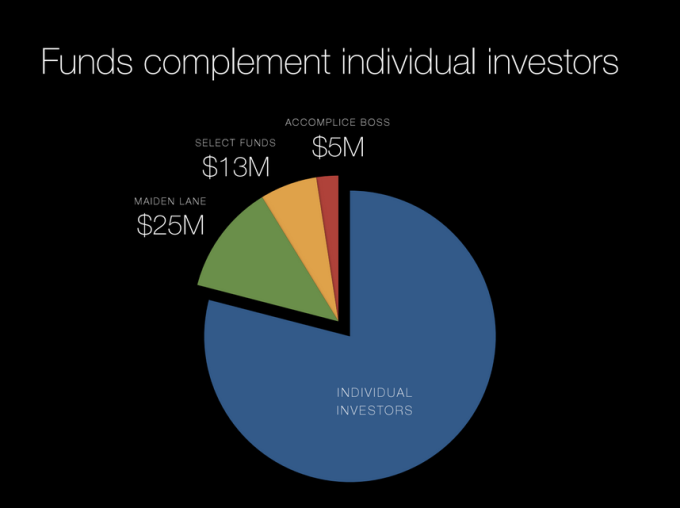 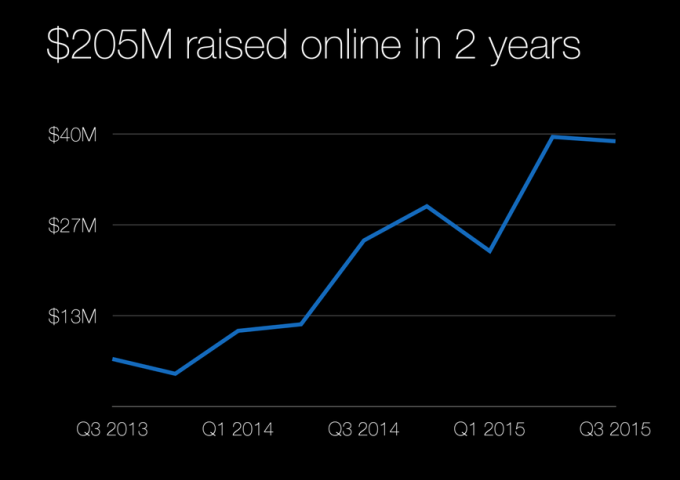 On top of the new CSC Upshot fund, Angellist also has a few other announcements. They’re opening special purpose vehicles for angels that want to exercise their pro rata rights in later rounds, so they can invest more and maintain their ownership stake in a company.

It’s basically taking the same software that angels use to invest in syndicate deals, and expanding that to later-stage rounds and limited partners.

The third piece is a new job hunting app for iOS. AngelList already has 49,000 active candidates and 8,100 companies recruiting on its platform.

The new Jobs app has a Tinder-like mechanic where recruiters and candidates can swipe left or right on each other. AngelList is already supporting 52,000 such matches a month. 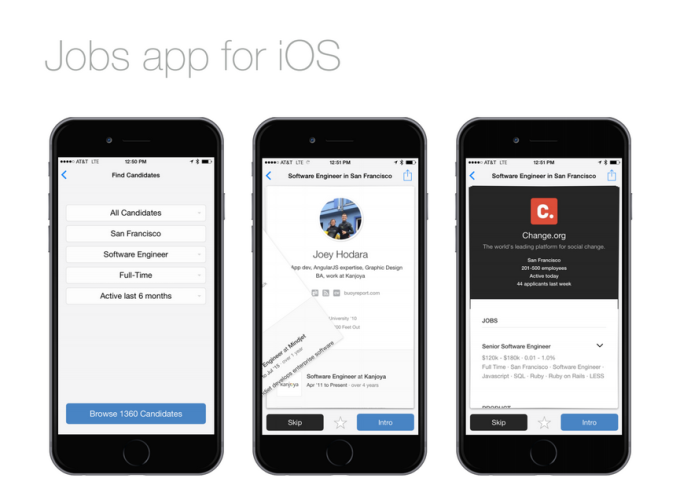 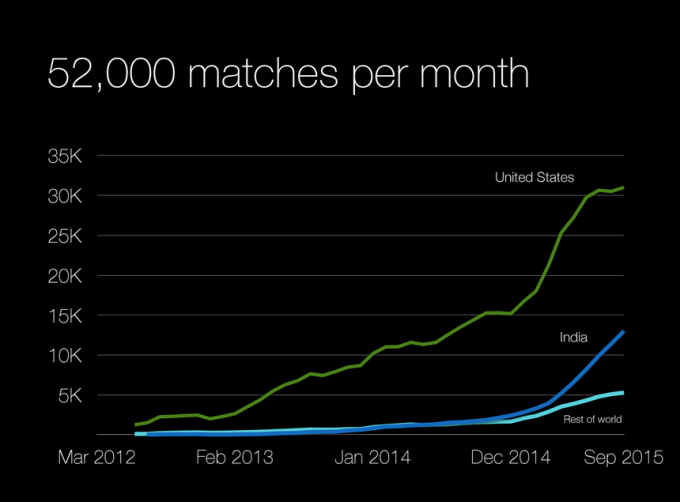 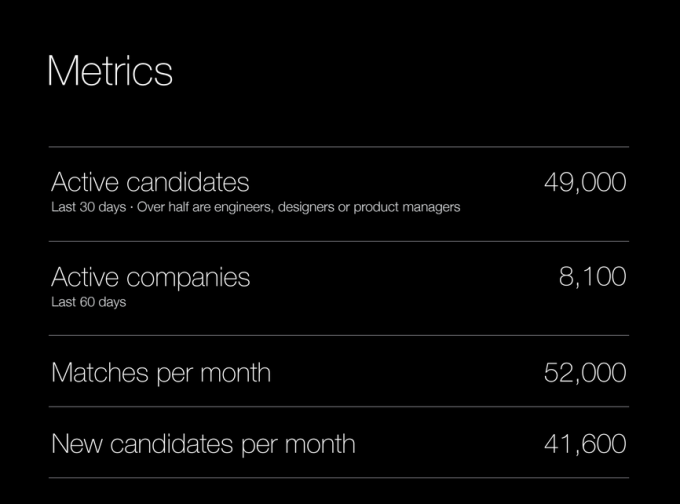