GPS device maker TomTom has moved beyond turn-by-turn directions into smartwatches and embedded car software that could be used for self-driving vehicles.

The portable mapping device maker announced in September the release of 24,000 km (roughly 15,000 miles) of highly automated driving (HAD) maps covering Germany’s entire highway network. HAD maps are a highly accurate type of 3D mapping technology that enables automated driving vehicles to drive from point A to point B, instead of just sensing what is on the road in front of them.

These types of maps provide self-driving cars with a realistic representation of the road ahead, outlining such things as lane centerlines, lane dividers, road borders, and guard rails, for instance. It can also point out speed limits and lane dividers to keep the car in check and allow it to adjust accordingly. 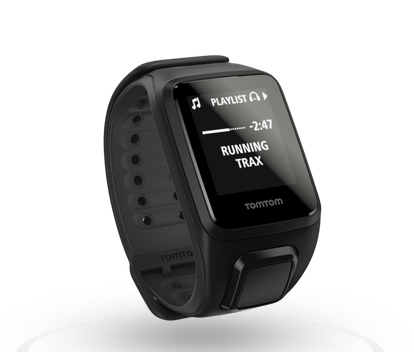 TomTom has also jumped into fitness with the release of the TomTom Spark watch. This wearable tracks many of the same things as other fitness devices such as steps, mileage and sleep time, but also allows you to listen to your music on the go without your smartphone. It does require a Bluetooth-enabled headset to work, but comes with quite a bit of storage space for plenty of tune options. The watch’s 3GB allows for up to 500 songs and can sync via USB cable from your laptop.

Thanks to TomTom’s origins in GPS technology, the Spark aims to accurately record mileage, minutes of activity and how many calories you may have burned during that time. The watch also comes with a serious heart rate sensor that the company says rivals that of the Apple Watch.

I spoke with co-founder Corinne Vigreux about the Spark fitness watch and also got an update on the Dutch company’s new mapping program that could help automotive brands like Volkswagen jump into the self-driving space. All of that and more is in the video up above.