Sometimes you just don’t know what to search for.

Maybe you’re trying to identify a landmark or find out some details about a cool-looking restaurant. Rather than search the web with endlessly vague keywords stacked on top of each other, PHIND is hoping you just open up your camera app.

PHIND enables users to search just by snapping a pic of a physical location. After users do so the app combs through geolocation data and intelligently filters through a library of photos to pinpoint exactly what you’re looking at. Once it zeroes in on the location, the app aggregates relevant data from services like Yelp, Foursquare, Wikipedia, TripAdvisor, Viator and Uber to give you a wide range of useful snippets on that location without you having to jump endlessly from app-to-app.

Since being voted the Startup Battlefield Wildcard Winner at TechCrunch Disrupt in New York earlier this year, PHIND has been busy raising cash and making improvements to the app. The company just announced that they have closed a $755k round of seed funding. They’re hoping to use this newly-acquired capital to improve their core technologies and begin pursuing more sustained marketing efforts. 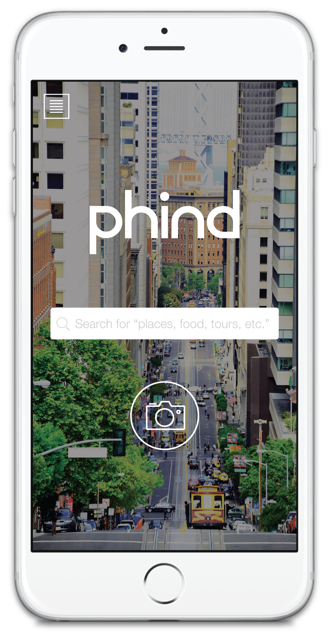 Launching alongside this funding announcement is a pretty major overhaul of the app. PHIND 2.0 places more emphasis on the unique experience offered by the app’s aggregation of other services. To make that feature more accessible in circumstances when you do know exactly what you’re searching for, this update introduces type and category search to function alongside the photo search.

I chatted with PHIND’s CEO Rishi Jhunjhnuwala who told me that his goal with this release was really to ensure that the app was accessible in all circumstances to users, and that meant expounding on the original idea of photo-based search a bit.

“People were telling us that they really loved the way we presented content and they loved the information they were getting but that there were times when they knew exactly what they were searching for but still wanted access to our content,” Jhunjhnuwala said.

Jhunjhnuwala said this expansion really helps PHIND avoid the trap some of its competitors have fallen into: carving out too specific a niche and being reduced to a novelty discovery app.

PHIND 2.0 allows the company the freedom to put more resources towards refining the content aggregation side of the app while also giving them the chance to make the product more accessible to more frequent users.