Online advertisers and publishers might get a lot smarter about their audiences’ offline habits, thanks to a new product from Quantcast called Audience Grid.

Quantcast CEO Konrad Feldman described this as as “the largest open data marketing platform bridging the gap between offline and online.” As he explained it, Audience Grid connects Quantcast’s online data with data from partners like TiVo Research.

Other audience targeting efforts have struggled online, Feldman argued, because “they don’t have any scale.” As a result, when advertisers launch broad campaigns at “Internet scale,” they’re forced to use “very simplistic descriptions of audiences” — usually just broad strokes like age and gender.

He argued that Quantcast, on the other hand, has “proven very clearly how we can create accurate, scaled data,” and by combining its data and methodology with new partners, it can deliver additional insights.

For one thing, by using TV data, Audience Grid could help an online advertiser target fans of a particular show, or help publishers see some which shows their readers actually watch. In fact, the company said it already found that Vox readers are more likely to watch The Blacklist, while Wall Street Journal readers are more likely to watch The Good Life. (Make of this what you will.) 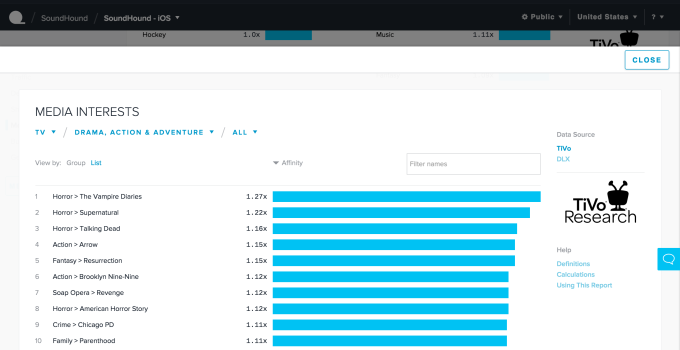 Frank Foster, senior vice president and general manager at TiVo Research, said that partnering with Quantcast is part of a broader effort at his company to make television “more accountable.” That’s why TiVo is doing its own research and tracking things like whether TV ads actually drive in-store traffic and sales. He added that he’s hopeful that Audience Grid could eventually improve TV ads as well as online ads.

Quantcast says all the data in Audience Grid will be anonymized. It also says it will make the data available for free to anyone using Quantcast Measure.

“We thought there could be huge value in making that sort of detailed expertise and nuanced, accurate data widely available to the whole ecosystem,” Feldman said.