It’s unclear if Apple is setting a precedent, or has only accidentally allowed the approval of a new app, known as Been Choice, into the iTunes App Store. The app claims to block advertisements not only in mobile applications, but also in native mobile apps, including Facebook and even Apple’s own News application. To make this work, Been Choice offers a combination of a content blocker for Safari and a VPN service, the latter which allows it to filter out ad traffic using deep packet inspection.

Obviously, blocking ads in native applications could be disruptive to the primary way a number of mobile application developers make money today. So while Apple may be catering to consumers’ growing disgust with invasive and disruptive online advertisements by supporting ad-blocking technology in its newly released mobile operating system, iOS 9, it seems that allowing an app like Been Choice to actually block ads in native apps – and in particular, Apple’s own News app – goes against Apple’s own best interests.

In other words, time will tell whether Apple meant to allow such a thing or whether Been Choice getting the boot from the Apple App Store is only moments away. (Apple has not yet commented.)

The app is also concerning because it hides a paid surveys operation under the hood of an app promoting data privacy, which seems like a bad fit.

The oddly named Been Choice application was created by co-founders Dave Yoon and Sang Shin, who met at McKinsey & Co. and have worked together for more than eight years. Yoon was involved with marketing and marketing insights at McKinsey, while Shin has worked in technology for two decades, mostly in finance.

Yoon explains that the motivation behind Been Choice has to do with offering users a choice between ad blocking and sharing data in order to earn rewards. That is, users are compensated when they agree to share their behavioral data with advertisers, publishers and app developers. Those rewards come in the form of cash (via PayPal) for now, but the app promises that Amazon gift cards and the option to donate earnings are planned. 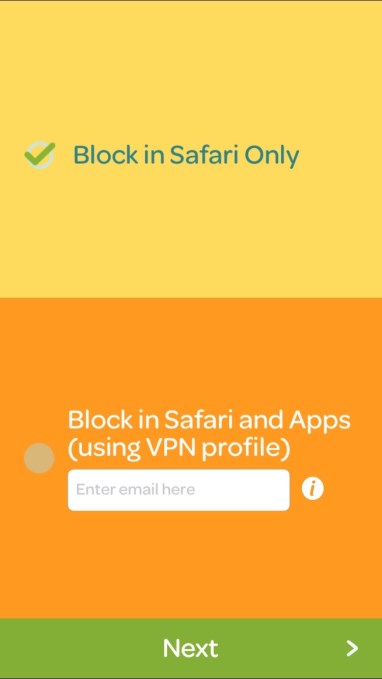 On the technical side, Been Choice offers two different settings related to ad blocking. One is the typical Safari Content blocker – like Crystal, 1Blocker, Purify, etc. (Users can enable ad blockers to eliminate ads from Safari during web browsing sessions — a new feature in iOS 9.)

The more extensive ad blocking is enabled by way of Been Choice’s VPN service. When it’s enabled for the first time, users will be prompted to install a profile on their device. If you’ve ever had to set up an iPhone to connect to your company’s network, you may be familiar with this process. When the VPN is enabled, traffic is then routed through Been Choice’s servers where it performs deep packet inspection on the content. It can then remove specific content – like ads – through pattern matching. 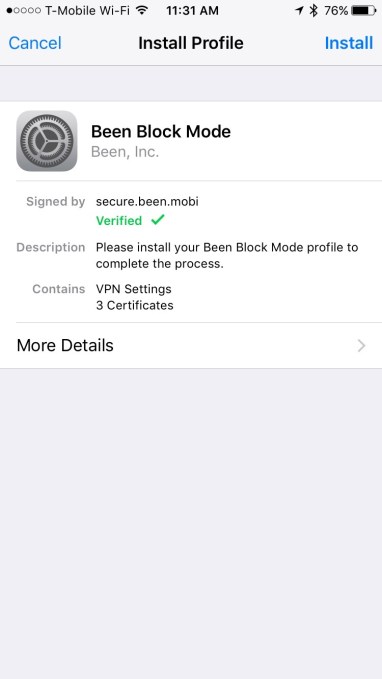 “While we inspect headers and the body, no user content is stored, and our filtering is done on the fly. This approach may be more familiar in its corporate form. For example, companies use deep packet inspection on their managed devices to ensure that sensitive information never leaves internal corporate networks,” explains Yoon.

This ability, the company claims, makes Been Choice the first to block ads in Facebook’s native iOS app. In addition, the app blocks ads in Pinterest, Pandora, Yahoo and the New York Times apps, among others. It also blocks sponsored posts, native ads, and pre-roll videos like those in news apps from CNN or CNBC, for example.

Surprisingly, Been Choice is also capable of blocking ads in Apple’s News app, as well: 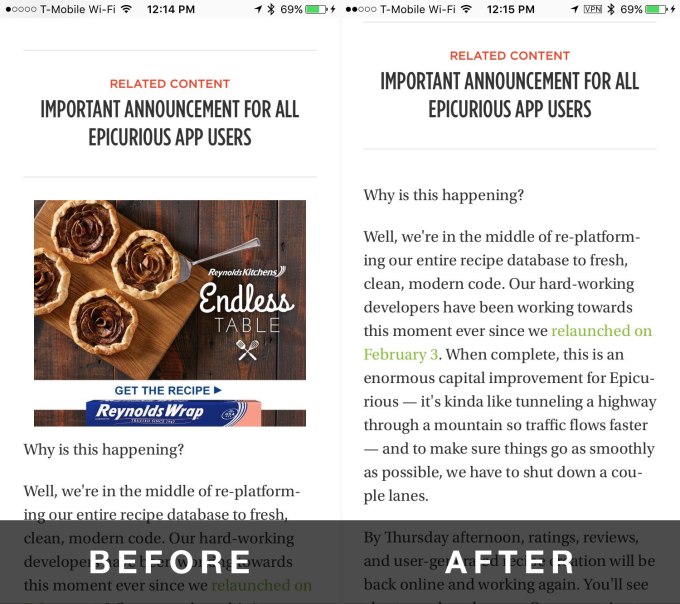 Twitter, however, is not blocked because of its use of end-to-end encryption that makes it impossible to block ad traffic without blocking non-ad traffic.

The team believes that users should take more control over their data-sharing behavior, in order to understand the value of that data rather than blindly offering it up in exchange for creepily targeted ads. That’s fair, but typically mainstream technology adopters are more passive when it comes to things like this.

Installing, then enabling, a Safari ad blocker is one thing, but using a VPN service to wipe out ads across apps and then toggling between “block” and “earn” modes from time to time may be asking for too much user participation. (That’s if Been Choice even gets to stick around in the App Store after Apple sees what it’s up to!)

Even for those who feel comfortable with the technology aspects to Been Choice, the app itself needs better mechanisms to turn off or on the VPN. (Currently, you have to go to Settings –> General –> VPN then click the “i” next to the Been profile and disable “Connect on Demand.”)

Meanwhile, earning rewards takes time. You need 30,000 “points” to earn $20 via PayPal. Earning is time-based, not based on ads avoided, so you can earn 1,000 points per day by leaving the VPN enabled.

Finally, the Earn mode also offers other ways to gain rewards that make Been Choice seem more like a paid surveys operation, or competitor to something like SwagBucks. These types of companies are focused on users exchanging information with marketers in return for rewards.

It’s also not clear how well users will understand what data Earn mode is collecting and reselling, as users tend not to read privacy policies. And according to the Been Choice Privacy Policy, the company is tapping into the data traffic to pull device info, carrier and network info, device IDs, information about apps and data usage, “content of your communications and transactions” excluding financial and e-commerce applications (!!!), and the vague “information about you.”

The company, however, says it takes “reasonable steps to remove all personally identifiable information.” HMMM.

Still, when asked if users are actually sharing more data through Earn mode than when viewing ads, Yoon admitted that’s indeed the case.

“It’s absolutely more data. And that’s what we set out to build,” he explains.

“We think if you have consent from the user, and share economics with the user, you can gather better data. But the key question is consent,” Yoon continues.

“Today, it’s muddled and compromised. It’s an implicit agreement, and neither side benefits and both sides are left wanting more. More privacy and control on one side. More data and better data on the other. By providing a simple switch we are creating choice,” he says.

The Earn option creates a confusing paradigm for Been Choice. On the one hand, the app means to cater to those who don’t want ads anywhere – even in their native apps. Then, on the flip side, it’s hoping to reach those who are more than willing to sell their data for cash.

These two demographics are wildly different, and it’s not likely the ad-blocking users will ever be willing to convert to “earners.” In fact, they’re probably going to be distrustful of any app that talks about user privacy, but then encourages you to give it up for some spare change.

[Update: Some readers are pointing out that VPN services have enabled this sort of ad blocking previously. That’s worth noting, but the difference is that these existed prior to iOS 9 and the release of Apple’s own iAd-infused News application. That the company would now allow an ad-blocking app/VPN service to actually cut into its own revenue stream is surprising.]