Providing proof that markets are silly, shares of Twitter stock are up around 5 percent today following news that Jack Dorsey will again be its CEO. Dorsey will retain his role at Square, making him a rare double executive. 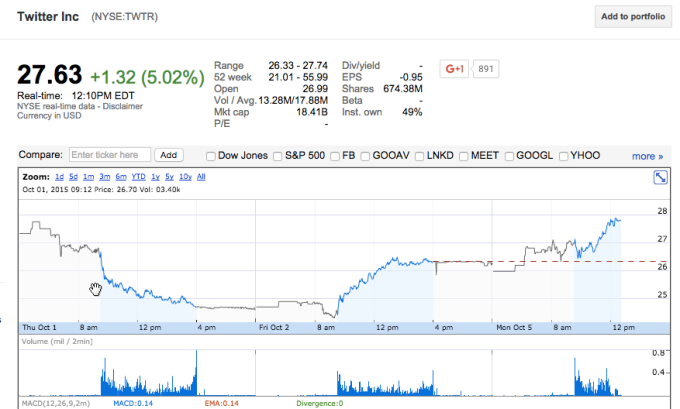 This means two things. First that the markets are apparently at least modestly surprised at news that was functional truth inside the technology world for some time. And, that investors are content with Dorsey’s return.

The tale of his prior exit is now the stuff of rumors und drang, but that is, apparently for now, water under an upstream bridge.

According to Google Finance, Twitter is now worth $17.79 billion, implying a market cap spike of just around a billion dollars, depending on the most recent fluctuation in the firm’s share price. A billion dollars is a meaningful increase in the value of Twitter, which has endured violent share-price swings.

Now it’s work time. Dorsey must prove that he can expand Twitter’s user base. Newly appointed COO Adam Bain has been masterful at building the social firm’s core business. Other executives have, to date, failed to grow Twitter’s user base at a respectable clip. You can only go back to the same well so many times; thus, Dorsey’s task is clear.

For now, investors are happy. We’ll see where things stand during earnings.