After four months of running under Jack Dorsey interim chief executive, today Twitter finally named him as its permanent leader. The man who helped co-found Twitter in 2006 is now its full-time CEO again.

In addition to the new permanent role for Dorsey, Adam Bain is becoming COO — Bain used to handle revenue and partnerships at Twitter and was another CEO candidate. Dorsey also announced that a new board is in the works. The company already announced that Dick Costolo stepped down from the board. Dorsey will continue to serve as a board member but no longer as chairman.

“There are currently no plans to provide Mr. Dorsey with direct compensation for his role as Chief Executive Officer,” Twitter writes in the SEC document announcing the changes.

In an investor call, Twitter executives announced the changes and answered questions. “It’s our goal to exceed the expectations the world has for us,” Dorsey said. “I’ll do whatever it takes.”

“I’ve worked in partnership with Jack since I joined Twitter in 2010,” Bain said. He also said that he’s met with Dorsey over the years to talk about business, product and overall strategy. He also commented on the last four months as Dorsey has been temporary CEO for quite a while now.

“He’s got the senior staff working better than ever,” he said. “He’s also led the team for a product re-envisioning and product roadmap for 2016.” Naturally, the conversation shifted toward this mysterious product roadmap.

When asked about it, Dorsey alluded to project lightning, Twitter’s plan to show relevant live content to casual users.

“We’ve been reviewing our roadmap to make sure that we make Twitter easier to everyone around the world,” he said. “There’s a lot of initiatives aimed at making sure that people can immediately get value out of Twitter.”

At the same time, Dorsey reassured existing Twitter users, saying that the company is also building new tools to let power users do more things. “We’ve been playing with [Lightning] internally for quite some time and it feels… amazing,” Dorsey said.

Dorsey is juggling the job with a couple of other roles. In addition to already being the social network’s chairman of the board, he is also the CEO of Square, a payment processing company that he co-founded in 2009 and is reportedly slated for a public offering sometime this year. Insiders at Square have been quietly assuring everyone that Dorsey plans to stick around as CEO.

When it comes to splitting his time between Square, Dorsey dodged the question during the investor call. 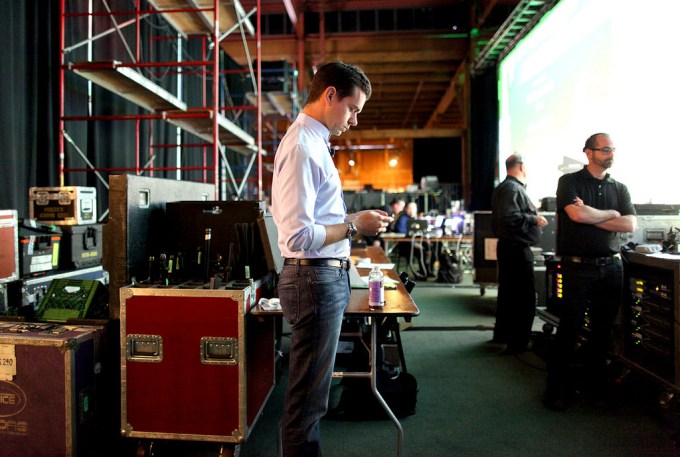 An End To Many Speculations

After a Re/code article was published citing sources saying that Dorsey’s new permanent job was imminent, Twitter’s stock popped a few percentage points followed by a sharp decline and another rise.

Throughout his interim CEO period, Dorsey has remained committed to leading Square, as well. But the fact that Dorsey was already running another company when he took over as interim CEO of Twitter from Dick Costolo may have been one of the sticking points when considering him for the job long-term: Chris Sacca, a vocal Twitter investor, claims that a Twitter board member was one of the people who took issue with Dorsey doing both jobs simultaneously.

Some may have believed that the CEO role would always go to Dorsey, but more widely the move brings to an end one of the more-speculated leadership vacancies in the tech industry. Other names that we had heard floated for the job included insiders Adam Bain (head of revenue and partnerships and now COO) and CFO Anthony Noto; Jeff Weiner from LinkedIn; Bradley Horowtiz from Google and Padmasree Warrior.

We may now have a name to engrave on the back of the chair at the top of the table, but it doesn’t make that seat any less hot.

Twitter’s stock has been on a roller coaster, with the company weathering questions about its user growth and engagement, leadership changes, and more existentially what it is as a product. That’s led many to debate whether the company, with its stock in a dip, would simply get snapped up by a bigger fish like Google.

In that regard, you can see how someone leading Twitter who has been connected to it and its bigger vision from the start could make a lot of sense. Now the question will be how Dorsey implements that legacy advantage.

We are naming @adambain COO of Twitter, we're working to change the composition of our Board, and I will serve as CEO of Twitter and Square!

I've been CEO of both companies for over 3 months now. I have the smartest, strongest, and most determined leaders in the world on my teams.

My focus is to build teams that move fast, and learn faster. In the past 3 months we have increased our speed and urgency at both companies.

A few things about each company, and their impact in the world. What we stand for gives us purpose, and that purpose dictates our job ahead.

Square stands for economic empowerment. We stand for financial systems that serve instead of rule. We stand for leveling the playing field.

Twitter stands for freedom of expression. We stand for speaking truth to power. And we stand for empowering dialogue.

Twitter is the most powerful communications tool of our time. It shows everything the world is saying rn…10-15 minutes before anything else.

Both companies have strong businesses and are well positioned to grow their impact in the world. I will do whatever it takes to ensure that.

We're working hard at Twitter to focus our roadmap on a few things we can make really great. And we're strengthening our team along the way.

Our work forward is to make Twitter easy to understand by anyone in the world, and give more utility to the people who love to use it daily!

That's all for now. We'll have a bit more to say on the Twitter investor call today at 5:30a Pacific (see @twitterIR for all the details). ✌

1/ delighted for @jack and the team and excited for the future of Twitter. https://t.co/hY7ZEttA2t

2/ @jack is a calm and thoughtful leader. He is bold, forthright, decisive, and the team loves working with him. https://t.co/2M3y7oEB45

3/ as I step off the board, two reminders: those banging pots and pans outside Twitter know the least about what's going on inside Twitter

4/ and @Twitter, there is only one narrative that matters and it's the one you'll create for the world.

I’m thrilled @jack is now Twitter's permanent CEO, and honored to serve as COO. No one has thought more about @twitter than him.

.@jack has the insight as well as the moral authority as a founder to push teams to make big, bold changes to @twitter.

Our teams are energized by @jack and our advertisers & partners love interacting with him.

Expanding my role is only possible because of our amazing sales & business leadership and teams. They are the best in the business.