Though his last startup flamed out, Secret co-founder David Byttow is ready to take another shot alongside former Secret designer Ben Lee. TechCrunch has learned the new startup will be in the enterprise space and won’t be based around anonymity.

An image attained by TechCrunch shows Byttow told Facebook friends late last week that he’d been working at Medium on its upcoming October 7 launch and is now going to start cranking on the new project.

Byttow writes, “This week is my final week helping out Medium (http://medium.com) with their upcoming launch on October 7th. Very excited for that. And now, after 5 months, I’m thrilled to begin work on my next project in earnest and I can’t wait to share when there’s something to show. It won’t be like Secret, but it will be bold.”

When asked about the new project, Byttow said, “not yet.” However, he did say that he will reveal further details in a Product Hunt Live session on October 29. 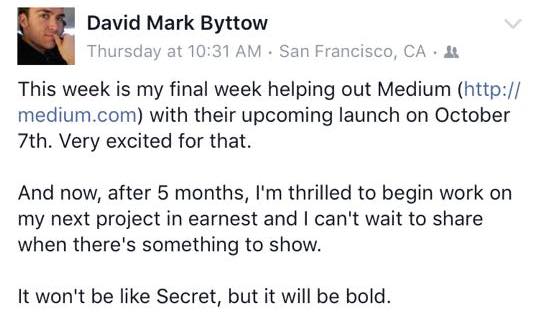 Lee mirrored that, saying he’s finished working with Medium, where LinkedIn says he’s been since August as a design consultant and is getting started on a new project. A source close to Secret confirmed to TechCrunch that Byttow and Lee will be working together. Sources confirm Secret’s other co-founder Chrys Bader-Wechseler is not involved.

Secret’s founders were widely criticized for failing to adequately protect their 15 million registered users from cyberbullying in their anonymous text sharing app. You can see Byttow’s reluctance to admit the extent of cyberbullying while being grilled by TechCrunch’s Josh Constine at SXSW 2014 in the video below. He claimed “We don’t see very much of that, if any.”

Bader-Wechseler left the company three months before Byttow decided “with a heavy heart” to shut it down. In response to the cyberbullying issue, Byttow’s farewell post read, “it’s also the ultimate double-edged sword, which must be wielded with great respect and care.”

Secret’s founders received further flogging in the press for not returning the $3 million each took off the table during Secret’s last funding round — some of which they spent on expensive sports cars. Perhaps Byttow’s cash could help get the new project off the ground. 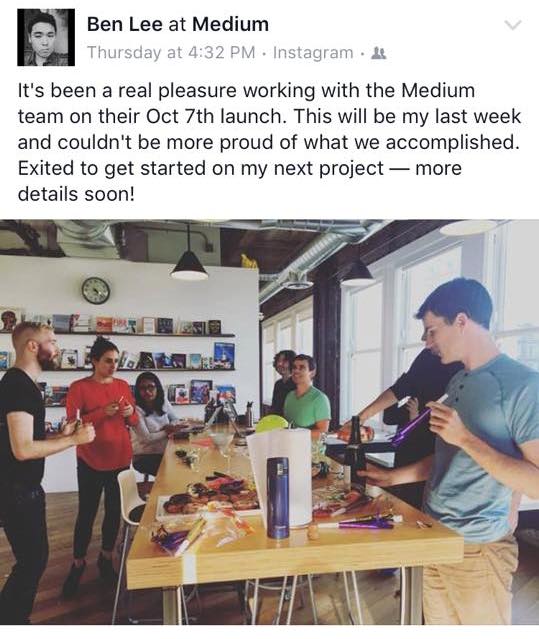 But now Byttow, who previously worked at Google, Square, and Double Helix Games, will be trying to clear his name with a new enterprise project. Secret did at one point build a Dens enterprise feature for anonymous internal sharing at companies.

Attracting talent might be tough, though, as Byttow developed a sour reputation as a manager in the final days of Secret. Hopefully, the new project won’t be as socially destructive.