OneWeb and SpaceX have both launched ambitious plans to bring hundreds of satellites to Low Earth Orbit (LEO) and, by doing so, provide low-latency broadband internet to anyone anywhere on Earth. Through strategic partnerships and impressive fundraising, they are both well positioned to develop their product. Providing service with this product, however, is an entirely different story.

The larger challenges won’t likely be associated with financing or technology development. Both companies will need to deal with strict international regulations, comply with varied government policies for internet development, and ensure that customers are ready and willing to pay once the service comes online.

These issues complicate an already complex business challenge, which is part of the reason why other companies haven’t been able to do this before (and why some are skeptical that it can be accomplished today). To put it simply, a lot can go wrong.

With the amount of work and risk required, it seems logical that SpaceX CEO Elon Musk and OneWeb CEO Greg Wyler, a former satellite executive at Google, would be better off working together than they would apart. In fact, that was the plan initially.

Wyler originally brought his OneWeb concept to Google, but in September 2014, Wyler left the company to work with Musk on a new satellite venture. When he left, Wyler took with him certain radio spectrum rights which he can put to use at OneWeb.

This is a key advantage because different parts of the radio spectrum are like real estate for satellite operators. With these spectrum rights, Wyler has first dibs on the real estate that is essential for anyone who hopes to create a LEO-based satellite internet network.

It’s currently unclear how SpaceX will ultimately cope with this, but it’s entirely possible that OneWeb would be forced to share this spectrum in certain countries, like the United States.

Ownership of radio frequency “real estate” is a huge component of the challenges that both SpaceX and OneWeb face in this game. Any satellite operator that communicates with the Earth is required to apply for part of this limited frequency spectrum through the International Telecommunications Union (ITU), which allocates global radio spectrum and satellite orbits to companies like OneWeb and SpaceX. 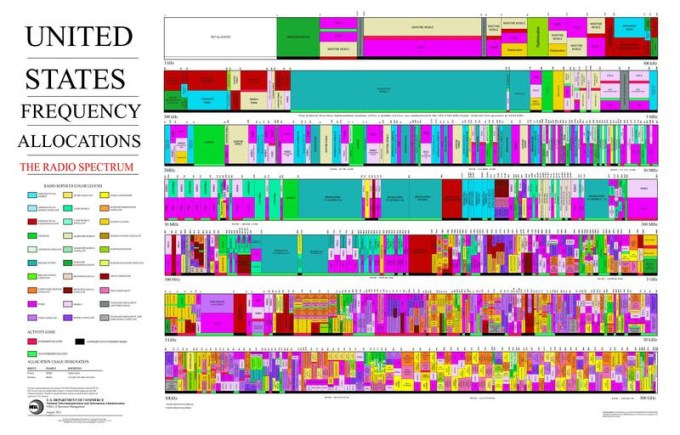 Frequency Allocation in the United States in 2011

It’s important that companies “stay in their lane” and only operate along the orbits and the spectrum that they were allocated. Some older companies stationed in the higher geostationary orbit (GEO) are worried that, with OneWeb’s proposed plans, they may unintentionally interfere with current companies’ operations.

OneWeb has stated that they will conform to all ITU regulations, avoiding any interference. Still, there’s a concern that the ITU lacks the enforcement power to do anything if a newcomer like OneWeb were to interfere with incumbent satellite companies who operate on similar frequencies in similar locations.

This additional layer of complexity further questions why OneWeb and SpaceX aren’t attacking this business challenge from a united front. In January of 2015, Musk announced his own internet-providing satellite constellation, revealing that he had separated from Wyler’s OneWeb.

To better understand why they’ve gone separate ways, each taking on the unprecedented challenge of connecting the planet alone, we need to understand the goals of those in charge. OneWeb CEO Greg Wyler and SpaceX/Tesla CEO Elon Musk could both be described as philanthropic entrepreneurs, but the ways in which they plan to help humanity differ greatly.

Musk has dedicated his life to solving big problems. Through Tesla, he’s working to come up with an economical strategy to bring low-priced electric cars to the masses. Through SpaceX, he hopes to make humankind an interplanetary species by developing the right technology to bring us to Mars.

That latter goal is very very expensive. The cost estimates for a trip to Mars depend on many factors, but even some of the lowest estimates tally up to $30 billion. Despite that high price tag, Musk plans to find ways to finance the business without taking his rocket company public.

He has said, “The reason I haven’t taken SpaceX public is the goals of SpaceX are very long-term, which is to establish a city on Mars.” Finding the most profitable way to fund this interplanetary venture may influence the way he runs his new satellite internet concept, which will operate within the SpaceX business.

Wyler’s philanthropic and entrepreneurial pursuits have been more closely relevant to his current venture. Back in 2002, Wyler founded Terracom, a company that sought to bring cell phone and internet service to Rwanda. The venture required hundreds of miles of fiber-optic cable to be laid in trenches, which Wyler was known to help with on occasion.

While Terracom achieved a lot of milestones, like connecting thousands to the internet shortly after much of Rwanda’s existing infrastructure was destroyed during its genocidal conflict in the 90’s, the company also experienced local political headaches that made it hard for Wyler to manage. He eventually sold off the assets.

Wyler told Bloomberg that the biggest challenge wasn’t getting Rwanda online; data could travel quickly within Rwanda over their fiber network. It was connecting Rwanda to the rest of the world that was the issue because this required data to travel along slow and expensive satellite connections.

After this, Wyler set his sights on more global internet strategies. In 2007, he founded O3B which stands for “the Other 3 Billion,” referring to the number of people in the world without internet at the time. O3B is a satellite constellation based in Medium Earth Orbit (MEO) about 5,000 miles altitude which lessens a lot of the latency problems that similar constellations have from the GEO altitude of 22,000 miles.

O3B has been a game changer for many niche customers, namely islands, cruise ships and oil rigs who can now afford decent internet service. It’s great for these markets, but due to the characteristics of the satellites’ orbits, the O3B constellation cannot provide true global coverage. This is where OneWeb comes in.

Wyler’s life work has been focused on connecting those who have been left in digital darkness. In fact, part of OneWeb’s mission is to bring internet to women entrepreneurs in developing countries and they’re working with the Coca-Cola Company to do it.

Coke has a program called Five by 20 which aims to enable the economic empowerment of 5 million women entrepreneurs around the world by 2020. Coca-Cola is an investor in OneWeb, whose core market is in remote, rural areas where many of these women reside.

Through Terracom, O3B, and now OneWeb, Wyler has attacked the challenge of providing internet service from many different angles. He has dedicated the past 15 years of his life to bringing unconnected communities to the modern age of the World Wide Web. This differs slightly to Musk’s priority, which is to find ways to finance a journey to Mars and make humans an interplanetary species (which, at this point may also require an internet network).

If one CEO intends to design a business around optimizing the number of people receiving internet, while the other wants to optimize the financial gain to be made, it would makes sense that the two would go separate ways.

So today, each are working toward their similar, but different goals of global satellite internet development. OneWeb will be launching their first test satellites in 2017. SpaceX hasn’t released an estimated first launch date, but in January, Musk said that he hopes to provide initial service within five years.

Many would pose this as a race between OneWeb and SpaceX. This is misleading.

In the U.S. alone, we have over 20 broadband internet providers and we still have issues that stem from the lack of competition. If the question is about the market that’s available, there’s plenty to go around.

The radio spectrum allocation is a bit trickier, but each country can make rules about spectrum allocation over its own jurisdiction, which leaves room for competition. There are obvious benefits that come from being the first to market, but the world is made up of many diverse countries and a lot of people need internet.

Wherever their priorities lie, Musk and Wyler intend to change the world in a big way. There will be many local, national, and international hurdles to overcome before that can happen; but I know some 4 billion unconnected people around the world that will be cheering them on along the way.