Instead of donating food, bedding or medical care or offering high-interest micro-finance loans, their model was just to give families cash. They gave families unconditional, cash grants of about $1,000 — or the equivalent of a one-year budget for a single household.

What they found was that the cash grants cut the number of days children went hungry by almost half and increased their earnings by almost one-third. This was because families could start making longer-term investments like buying a tin roof that lasts a decade instead of having to purchase a brand-new thatch roof every year. Today their project, GiveDirectly, has scaled to giving between $40 and 50 million per year.

Now the pair is expanding beyond the non-profit world into tech entrepreneurship with a new company called Segovia. It’s modern enterprise software for aid programs and NGOs.

The company is backed with $15 million from investors like LinkedIn founder Reid Hoffman, the Omidyar Network and the Global Innovation Fund, . [Edit: The Global Innovation Fund is financially backed by the government development agencies of the U.K., U.S. and Sweden and Australia. But it is a separate institution with an independent governance structure.]

“It turns out that a lot of people and organizations need a platform to distribute things in bulk — whether that’s cash or medical supplies,” Faye said. “There wasn’t an end-to-end solution. There were a lot of locally built tools, but they aren’t real scalable solutions.”

Field workers, for example, need to do in-take on clients and figure out how to identify people in need. With older software, NGOs were uploading insecure spreadsheets and working across multiple non-integrated databases.

Segovia handles field data collection and case management on the enrollment side and then payment management and scheduling on the other side. 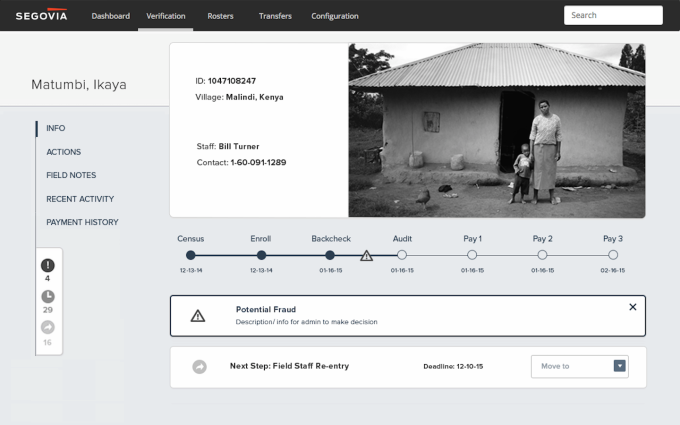 Faye and Niehaus don’t see their company as solely limited to non-profits either. They’re also very interested in the hundreds of billions of dollars in remittances that flow through global markets every year.

Then, there are also lots of corporations operating in emerging markets with hundreds of suppliers.

“For example, you could have a cocoa farm that needs to pay farmers while verifying the grade of cocoa,” Faye said. “The core challenge of what we do is really simple. You need to figure out who to pay and how to pay them, whether it’s cash grants or an insurance payout.”

Their software can’t necessarily counter last-mile corruption, but Segovia does have a complete a digital audit trail. Aid workers will have to make sure they’re working within trusted networks and relationships to avoid fraud.

“That’s a problem I don’t think Segovia can solve — the on-the-ground corruption where a staff member enrolls their friends instead of people who need aid. But we can show you who has entered data with dates and geostamps of where people were at different times.”