When it comes to transporting that new couch you bought from the storeroom to your living room, Dolly wants you to stop mooching off your friend with the truck.

Dolly is basically an Uber for furniture and other large items. The service isn’t meant to help you move all of your stuff into a new place — loads are pretty much confined to a few items that can be transported in a single pick-up truck trip. But when it comes to getting a piece of furniture delivered from an antique shop, it’s one of the better options out there.

Dolly just raised an $8 million Series A round led by Maveron. The one-year-old startup has now raised nearly $10 million to help it further its mission of giving consumers a more convenient, approachable way to move their shit.

The service, which users arrange through the company’s mobile app, has some unique challenges given the large physical size of the items they’re moving.

First off the app’s movers, called “helpers,” aren’t exactly driving around cities looking for couches to pick up, so when it comes to setting up your Dolly appointment, you’re going to need to give the app some advanced scheduling, especially if your own time window for the pick-up/drop-off is limited. 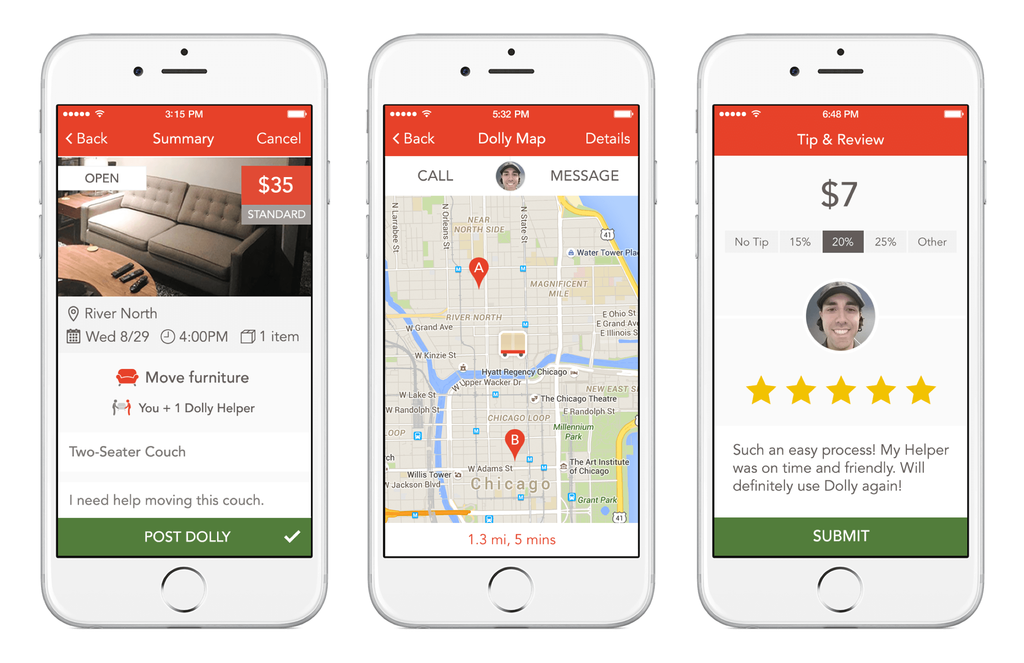 Then, as far as pricing goes, Dolly CEO Michael Howell says it really varies depending on what your specific needs are.

“We ask you what you’re moving, where it’s going and when you need it to get there. So the ‘what’s,’ ‘where’s’ and the ‘when’s’ give us some understanding of how difficult the job is. Then, we combine that with what service level you have selected,” Howell told TechCrunch.

In addition to the standard curbside drop-off, you can pay a bit more to have the movers place your items directly in your home or apartment. Howell said that most users spend between $60-$85 per transaction with the app, which he said is quite a bit cheaper than what they would pay to other third-party delivery services.

The app is consistently looking for ways to improve their services; Howell told me about one of their latest initiatives, which allows the user to actually ride along to their destination with the helper instead of having to spring for a separate Uber.

Dolly has already secured some major partnerships as it has looked to step up the visibility of its brand in Chicago. Dolly has worked closely with Crate & Barrel as a partner in helping customers get their recent major purchases delivered to their homes in a hassle-free manner.

“The Crate & Barrel customer is smart, modern and savvy. Crate & Barrel’s partnership with Dolly marks our commitment to adopting innovations that bring our customers a better overall customer experience,” Chris Kaye, vice president of supply chain at Crate & Barrel, said in a statement. “Deploying Dolly has given our customers another great customer service option to deliver product to their homes safely.”

Partnerships like these are key as Dolly looks to expand its services outside of the Chicago market where it was founded. In addition to launching today in Seattle, Howell told me that the company plans to expand to 20 major cities by the end of 2016.