Imagine a reality where surgeons practice difficult procedures on virtual renditions of their patients before walking into the operating room, and professional athletes review their exact muscle movements on a 3D game tape after they walk off the field.

Now that BioDigital, a 3D human body modeling startup, is releasing its API to the public, this is possible.

Over the past two years, the New York-based startup has worked closely with more than 100 organizations spanning all sectors of healthcare to tailor its virtual human body, comprising 7,000 objects modeled by hand, to specific use cases.

The National Institutes of Health, for instance, is using BioDigital to map bacteria in the body. For MyFace, a nonprofit that provides treatment to patients with craniofacial conditions, the virtual human enables doctors worldwide to learn how to perform cleft palate operations from afar.

“We’ve seen the profound impact that 3D tech has had on video games for the last 15 years, and more recently on geo-browsers and how we navigate planet earth,” says BioDigital founder Frank Sculli. “Nowhere does this make more sense than representing the human body.”

It may not be as thrilling as a video game, but it’s pretty fascinating to mess around with:

You can think of BioDigital as the Google Maps for the human body. In the same way that Starbucks integrates Google Maps into its apps and website to direct you to the nearest retail store, developers can now leverage the BioDigital API to visualize their health data.

Already, Mount Sinai and other teaching hospitals are using the BioDigital human to train their surgical fellows, who now practice on 3D humans as well as cadavers.

While this education is essential for doctors, the majority of patients want to understand what’s going on as well.

According to the latest PEW report, 72 percent of Internet users searched for health information online in the past 12 months. And 77 percent of that group, not surprisingly, most often consulted Google (or another search engine) as their online MD of choice.

“When people go to WebMD and Wikipedia and read about what heart failure is, it’s very passive, you’re either reading or you’re watching,” says Sculli. “Now you can interact with it, engage with it, and there’s deep analytics behind it.” 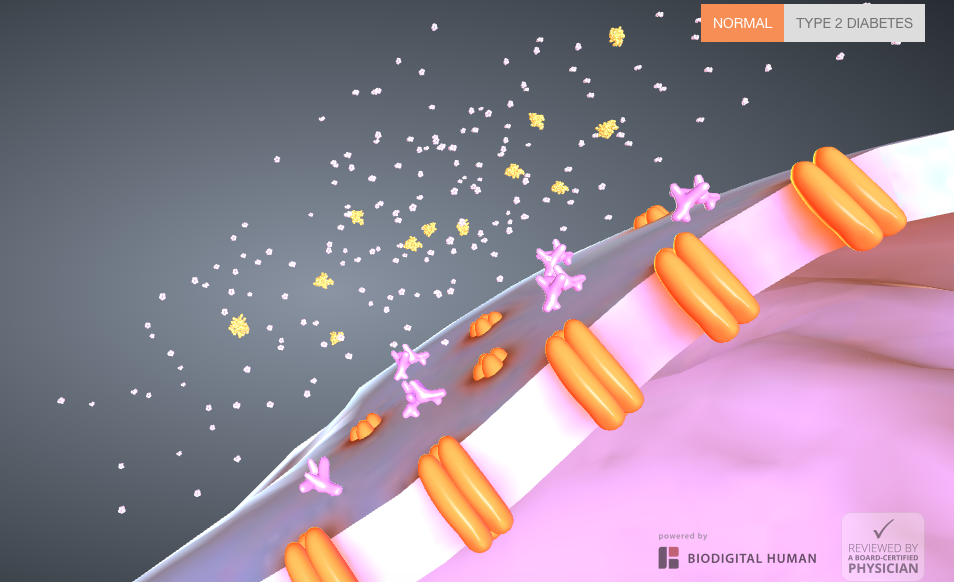 Earlier this year, BioDigital partnered with About.com to provide interactive visualizations for common health conditions. Patients searching for information about Type 2 diabetes, for instance, are presented with a 3D model of a cell’s response to insulin, in which they can explore the process from different angles while toggling between diabetic and normal cell function.

What’s revolutionary about the API launch, though, is that now developers can personalize the BioDigital human by integrating their own imaging data, movement data collected by wearables, and health record data, among other sources.

So essentially, instead of clicking around the standard human model on About.com, we could soon be exploring 3D models of our own bodies, constructed with our unique health data.

For athletes especially, the immediate advantages of virtually replicating a moving body are obvious. If you can see exactly which movements inflict pain or stress on your body, it’s much easier to understand how to avoid them.

For medical professionals, though, the ability to visualize vast amounts of health data in real time via the BioDigital human has the potential to change the way new information is analyzed and consumed.

“The human body is this incredible system of systems, and there’s an infinite amount of detail,” says Sculli. “So we can start mapping cellular mechanisms, and genomic and brain activity, and all of this information that’s being collected in masses from research and wearables, and make it consumable for people.”