As an increasing number of cable and satellite TV subscribers are cutting the cord – or never signing up for television in the first place – the traditional pay TV industry is scrambling to figure out how to compete in this new age of over-the-top services, on-demand streaming, and viewing that takes place on a variety of platforms beyond the living room’s big screen. We’ve seen pay TV providers like Verizon, Comcast and Dish more recently entering the space with streaming services of their own.

But this week, Comcast also debuted an additional effort at capturing mindshare and market share in this changing landscape with the debut of its online and mobile streaming service called Watchable.

News of Comcast’s plans for Watchable emerged earlier this year, when the company was said to be working on a video service that would feature content from sites it has invested in, like Vice Media and Vox Media, as well as other online sites and channels including The Onion, AwesomenessTV, and others. 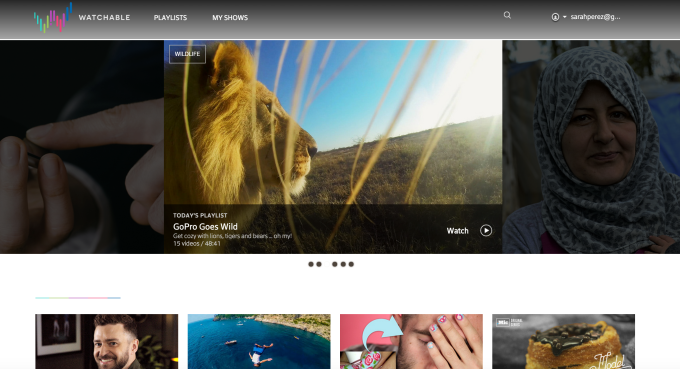 Now that service is available in beta, for X1 customers via set-top boxes, on the web, and via a mobile application that’s initially available for iOS devices.

That means Watchable will deliver a number of popular shows catering to the millennial crowd, including Vice, DNews, The Young Turks, Day of Gluttony, SMOSH, and Clevver alongside news and sports programming.

In total, there are 30 content partners available at launch and Comcast says that more will be added over time. However, in a blog post announcing the beta launch, the company seemed to characterize the new service as more of an experiment or test, noting how it fits alongside other initiatives, like Comcast’s investments in new media; youth-focused services like Xfinity on Campus, a cable TV service for colleges that offers cross-platform viewing; and its recent entry in the streaming video market with Comcast Stream. The company also said it would be looking for user feedback as Watchable continues to develop.

But while the service’s content is clearly aimed at the younger demographic who tends to watch less television and more video on mobile devices, it’s unclear why this audience will turn to Watchable instead of, say, YouTube, where they’ve already found many of these online networks and favorite shows.

At present, there’s not a super-compelling hook to get these viewers to change their established behavior, unlike with competitor Vessel, the startup from Hulu’s founding CEO Jason Kilar, which tempts viewers with early access to some of YouTube’s most popular shows before they hit Google’s larger network. 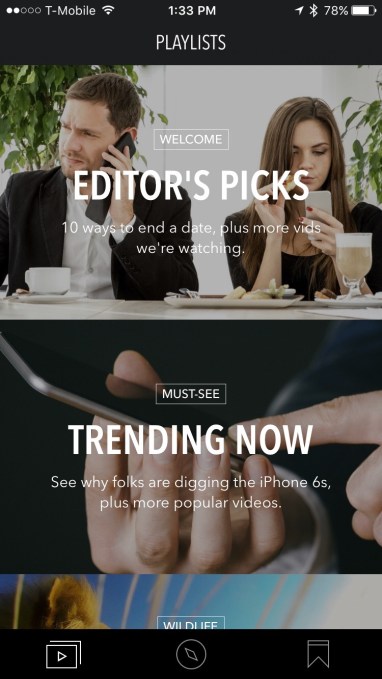 Instead, Watchable, for now, feels like more of a “me-too” effort from Comcast. At best, it’s a plus for those who haven’t yet ditched pay TV, as the set-top box integration means there’s a more convenient way to view content from favorite online networks in your living room.

That’s the big pitch to content creators as well, Comcast notes, saying, “many of our Watchable partners have not traditionally had distribution on the TV and we can give them a path to reach new audiences and further monetize their content on the biggest screen in the home.”

In addition, Variety reports that Comcast is offering a 70 percent share of video ad revenue to creators, which is bigger than Facebook and YouTube’s 45 percent share, making their participation a “no-brainer.”

But for those who have weaned themselves off old-school TV, it’s hard to see the appeal of Watchable in its current format. To make it a worthy alternative to using YouTube or just visiting sites directly on the web, Watchable would have to deliver a captivating user experience.

At this point, it hasn’t done that.

On the app, users get started by creating a username and password, which is easy enough to do. But even there, it’s easy to see the lack of care that’s gone into the app: The welcome screen misspells the word “successful” and asks, “Do you want to continue with Log in.” — punctuating it with a period instead of a question mark. 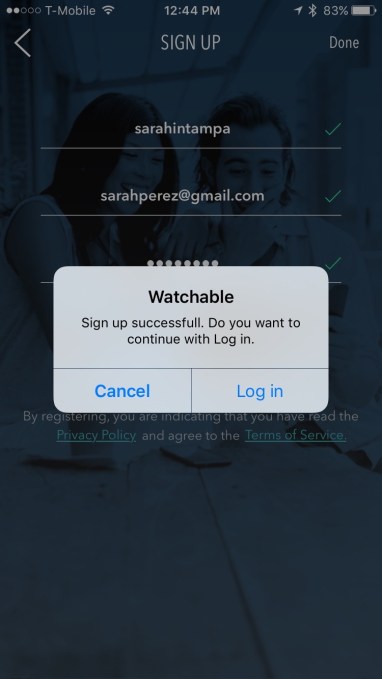 What the app lacks, right off the back, is personalization. It would make sense to offer an onboarding experience where users tick off things they’re interested in – not just “tech” or “sports,” but even niche topics like “robots” or “football,” then have Watchable adjust its content selections on the main screen accordingly. A customized video streaming app that was always being refreshed with content you cared about would be a more interesting offering than the sort of generic service Watchable is today.

(Comcast says that a future version will focus on personalization and social sharing, but it doesn’t offer details.)

Given that Watchable also has scored a good handful of popular shows, it also seems that there should be a way for users to quickly tap on their favorites during the initial setup process in order to populate their list of tracked shows in the app – another miss on Watchable’s part, at present.

Comcast says the service itself is free, but will be ad-supported. However, after checking out at least a dozen random videos from a variety of networks on the Watchable app, I didn’t encounter ads (pre-roll, post-roll, or otherwise) which indicates the ad efforts are still forthcoming.

The experience of watching the videos on Watchable is decent enough. The app offers standard player controls, a sharing button, a “plus” button to follow a show, a 10-second rewind option, and button to shrink the video or expand it to full-screen, landscape mode.

Unfortunately, the sharing button itself was buggy. The sharing box on iOS would pop up then disappear before you could select an option and big social networks like Facebook and Twitter weren’t yet included. 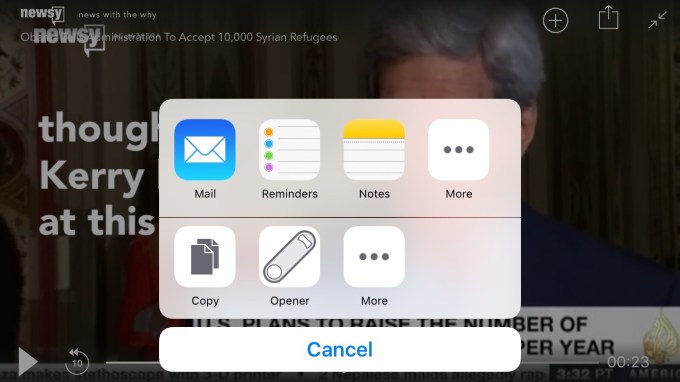 Meanwhile, Watchable doesn’t really help you discover other videos you might like in any way, unlike on YouTube where you can browse related videos suggestions. Instead, when your video finishes, the app just continues playing the next one from the same channel. So for instance, if you just watched a cool video from GoPro about lions, you wouldn’t be taken to more lion videos but to whatever was next in line from the network (bears, as it turns out.)

This is a problem that largely stems from Watchable’s still small content selection – YouTube is better for discovery because of its scale, and the ability to find videos around a given topic from its interface.

However, Watchable does have a couple of handy features – it keeps track of where you left off when viewing a video on one platform so you can resume it from the same spot as you switch devices. And it will send notifications when there are new videos from your favorite shows. (Of course, YouTube can do this too.)

What would make Watchable interesting – and more competitive with something like Dish’s Sling TV, for example – is if it actually leveraged Comcast’s relationship with traditional TV networks to offer a blend of cable TV and online video.

After all, Sling TV focuses more on bringing cable TV, including sports from ESPN and premium networks like HBO, to the web and mobile devices, but doesn’t really focus on integrating video content from new creators who work online.

And Verizon’s competing service Go90 [disclosure: Verizon owns TechCrunch] is launching with exclusive content, social features including clip-sharing and interest-based communities called “crews,” as well as a mix of primetime TV, live events and web series. However, Verizon’s service is mobile-only for now, while Watchable also works on the web and mobile web as well as on set-top boxes.

If Watchable had focused more on user experience, which suffers on Sling TV, and a richer content selection combined social features, to better rival Go90, it could have had a better shot at carving out its own niche right out of the gate.

Email me your cord-cutting story, or your YouTube recommendations: sarahp@beta.techcrunch.com