PepperTap, a nine-month-old grocery delivery service in India, has closed its third round of investment this year after announcing a $36 million raise.

The funding is led by Snapdeal, the India-based Amazon rival that is backed by Alibaba, with participation from existing investors Sequoia India and SAIF Partners, as well as new backers Ru-net, JAFCO, and BeeNext. And as if that isn’t enough, PepperTap, which landed $1.2 million in March and then $10 million more in April, is in discussions to expand this round by an additional $20 million.

PepperTap CEO and co-founder Navneet Singh told TechCrunch in an interview that the company didn’t deliberately break this round into two, but it received strong interest from new investors while it was in the final stages of wrapping up the $36 million Series B round. Singh added that the additional interest comes from VCs based outside of India.

Scaling To 75 Cities In India

Like Instacart and others, PepperTap provides groceries on-demand for customers. It works with existing stores (that provide supply) to get orders dispatched to customer within two hours, although Singh revealed that this will be halved to an hour within the next six to nine months. There’s plenty of competition in India, where Accel-backed ZopNow, well-funded Grofers and more established names like Big Basket and LocalBanya compete.

This year has been a wild ride for PepperTap. Back in April, when it landed investment from Sequoia, PepperTap operated in only one city: Gurgaon. Now, it is in 17 cities across India, and has plans to be in a total of 75 by the end of March next year. Singh said the company was processing 30-40 orders per day in January, but that figure is now at 15,000-17,000 — while a recent weekend spike, fueled by print newspaper ads, saw demand hit 40,000 orders in a single day. Singh told us that he expects GMV — the total sales volume per year — to hit $250 million by March 2016, while PepperTap’s 3,000-person headcount is likely to double over that same period. 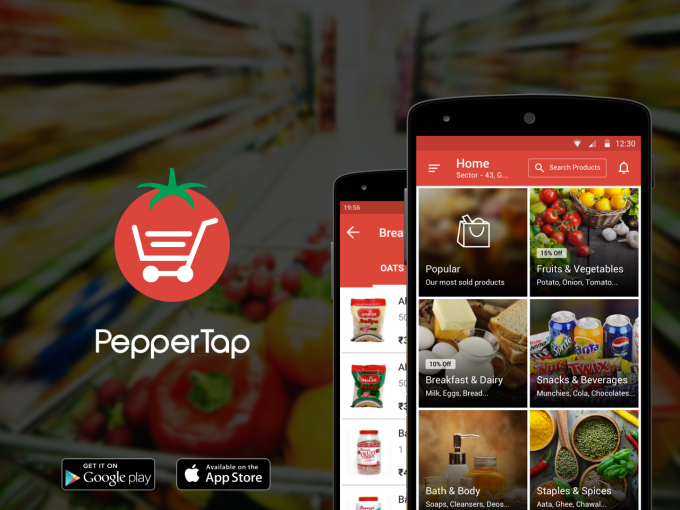 Hyper growth aside, the round is particularly interesting because it is led by Snapdeal, the Indian e-commerce firm that recently landed $500 million from Alibaba, SoftBank and Foxconn.

Is that a sign that Snapdeal is about to foray into groceries by buying PepperTap outright?

Not according to Singh, who said that the relationship is strategic and financial only at this point. (He also pointed out that he knows Snapdeal well after his previous logistics startup, Nuvoex, worked with the firm and came close to closing a similar investment last year.)

“We wanted a partner to help us scale up faster,” Singh said, explaining that the company would leverage Snapdeal’s significant customer base to help land new customers and avoid overly “burning money” on user acquisition.

“They’ve done quite a bit on the supply chain side, and have improved tremendously these past few years,” he added of Snapdeal.

While the PepperTap model may resemble businesses in the U.S., Europe and China, Singh believes that the Indian market and consumers are wholly different and that requires a new approach. For example, regulations prevent the mark-up of goods, so PepperTap is aiming to reach significant scale and use a different business model to make money, he said. Its approach to distribution is interesting, since it splits cities into zones and then uses a single store to service each one — thus helping its retail partners achieve scale quickly.

It also chooses its partners selectively, working with those that need to get online but don’t have the resources.

“We are not an e-grocer, we are partnering and enabling these stores to compete,” Singh said. “Stores right now face the challenge of people going online, [many] don’t have the finances to create their own infrastructure… their customers will migrate online, so we’re trying to help these guys compete with the bigger boys.”

If PepperTap can scale to 75 cities that would give it a formidable network, but Singh isn’t interested in moving into new verticals outside of the weekly shop. So, areas like fresh meat may be entered, but electronics and other more luxuriant products are not in the roadmap.

In addition to operational expenses, PepperTap plans to invest this new funding into developing its technology. Singh said Android accounts for 85 percent of orders, with iOS taking 10 percent and mobile web the remainder. When asked if he’d follow the Indian trend of going app-only and removing a mobile web presence, Singh admitted that the company had considered it but didn’t have any immediate plans.

PepperTap has raised three rounds of funding within six months, but we shouldn’t necessarily expect that rapid fire reloading of capital to continue.

“We have enough capital to go on, but capital raising is [a] fairly continuous [process],” he said, although interest from the “right” investors could trigger an additional round.