Viddsee, a free-to-watch video platform that specializes in independent cinema and short films from across Asia, has closed a new, multi-million dollar fund round as it bids to grab a slice of Asia’s growing appetite for online video and plot a global expansion.

The round was led by Japan’s CyberAgent Ventures and it includes participation from an undisclosed private investor. The size of the funding has also not been revealed, but Viddsee did confirm to TechCrunch that it takes its total funding to date to $2.3 million. For those trying to do the math: good luck, the company has never disclosed its previous funding rounds.

Two-year-old Viddsee‘s new raise comes at an important time for the company and its service, which counts two million monthly viewers. Southeast Asia, a culturally diverse region that’s home to over 600 million people, is finally upping its video content game after years of lagging the West. Netflix just stepped into Asia via Japan and it recently announced plans to begin its expansion into Southeast Asia with a Singapore launch in 2016, while local players HOOQ, spun out of Singtel, and iFlix, backed by $30 million, are already offering similar services now.

Unlike iFlix and HOOQ, which bear more than a passing resemblance to Netflix — in terms of their subscription-based business models and blend of mass market content from local and international publishers — Viddsee has paved its own path, adopting a more idealistic approach with a platform that is dedicated to showcasing independent and upcoming filmmakers from across Asia, as co-founder Derek Tan explained in a recent post on Medium. 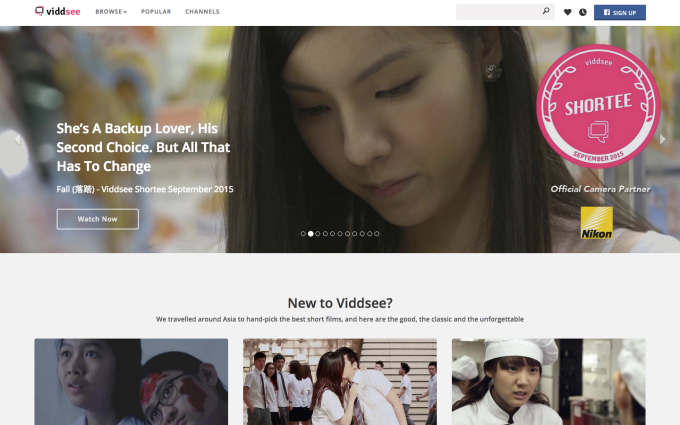 Viddsee has focused its acquisition of filmmakers (and thus content) and audience growth on Asia thus far. The company has on-the-ground operations in Singapore, where it is headquartered, and Taiwan, and now there are plans to extend its physical reach to Indonesia thanks to this new funding. That approach includes localizing content marketing — via its Buzz platform — and other marketing strategies, plus an increased presence at industry events to keep the company’s brand visible among filmmakers.

“Across these markets, language and cultural context is really a big thing. We need people on the ground who understand it all better. We know we need to be very relevant to communities,” Tan said.

Tan, a Singaporean who previously worked for now Yahoo-owned photo service Cooliris, explained that the company doesn’t do any marketing around its fundraising, which is why it has kept quiet about its financing to date. But, for its next round, it might crank up its ambitions and look beyond Asia.

“We’ve been raising money to help us achieve milestones, we’ve been very much focused on operations. We’re looking to raise again fairly soon, [and are] seeing what we need to get ourselves to the next milestone,” Tan said.

“We are looking at Asia first but could expand beyond that. What we’re building is a cinema platform… Asia is operationally a focus for us [now] because we are small, and have to pick our battles, but it doesn’t stop us growing out [to other regions],” he added.

Right now, the service is in the early days of making revenue. It does that through work with brands, who can sponsor films and even commission them, but it is actively looking at ways to expand its monetization efforts.

“As we grow our audience, there might be new opportunities for filmmakers and Viddsee,” Tan told TechCrunch. “There may be opportunities to challenge incumbent platforms in terms of how we are doing our monetization.”

Beyond subscription services, the prospect of which Tan has openly discussed before, he hinted that Viddsee might also offer crowdfunding for filmmakers, and explore other possibilities. Interestingly, Tan revealed that the unnamed investor in this new round owns media companies in the U.S. and Singapore and has invested in other tech startups in both markets, so, alongside CyberAgent, the company is sure to leverage its investor base.

You can check out Viddsee via its iOS and Android apps, or just www.viddsee.com.