Kim Kardashian’s initial foray into the iTunes App Store with her “Kim Kardashian: Hollywood” game may have grossed the star and development partner $200 million in annual revenue, according to some reports, but the Kardashian sisters’ latest attempt at App Store domination is beginning to fall flat. Buoyed by tabloid-esque media reports, the new apps from Kim Kardashian West, Khloé Kardashian, Kendall Jenner and Kylie Jenner launched earlier this month, then quickly shot up into the App Store’s top charts.

As subscription services that charge customers $2.99 per month for a peek inside the life of their favorite celeb, the apps were poised to rake in millions in annual gross revenue, assuming growth rates and retention numbers stayed as strong as they first seemed. Early projections were even claiming the apps could be on track to make an estimated $32 million in their first 12 months.

However, even for brand names as strong as the Kardashian and Jenner sisters, App Store fame can prove fleeting.

The apps themselves started off strong, leading to these bullish revenue projections.

For instance, Kylie Jenner’s app saw 1.75 million downloads the first week it was live, based on reports from app store analytics firm Apptopia. Meanwhile, Khloé and Kim’s apps pulled in just under half a million downloads during the same period of time. The early numbers indicated strong consumer interest in these apps – at the very least, they appeared to pique users’ curiosity, resulting in high downloads.

To put these numbers in perspective, no other celebrity app (that was not a game) ever reached the top 100 Overall on the iTunes App Store, much less score a No. 1 position, as Kylie’s app did earlier in September. As a point of comparison, the app from the band One Direction, which counts a highly engaged tween and teenage following, had fewer downloads in the last 30 days than Kylie’s app had in the first two hours of being live.

That’s star power in action, to be sure.

But while the apps were clearly popular, what was less clear was whether or not they would become serious revenue-generating businesses. That is: how many of those early adopters would turn into paying customers willing to subscribe to a sister’s subscription service once the free, seven-day trial period wrapped up?

Kylie’s app was seeing a 5.87 percent conversion rate of free to paid subscribers. Meanwhile, Khloé and Kim – despite having earlier been beaten in download numbers –  proved to offer compelling content, with 8.83 percent and 7.11 percent conversion rates, respectively. Kendall came in fourth with 4.96 percent of users signing up for her subscription service.

That translated to first-day gross revenues of $105,170 for Kylie, $29,844 for Khloé, $22,338 for Kim and $9,462 for Kendall. Based on consistent growth and continued conversions, that could mean the apps individually were on track to see anywhere from $2 million (Kendall) to $15 million (Kylie) in gross annual revenue, Apptopia estimated at the time. (At $28.7 million combined, that was a bit more conservative than earlier estimates, but still a good showing.)

Unfortunately for the celeb sisters, when the media buzz wore off, so did their App Store downloads. And that means revenue projections have been dropping as well.

Kim and Khloé’s apps were tanking by Tuesday, September 23rd as the paid service kicked off. Kylie’s app hung onto a spot in the top 50 for a time, however.

But by Sunday, September 27th, the decline continued. Kylie’s app is now on its way out of the top 200 Overall, at No. 172. It’s still well-ranked in the “Entertainment” category at No. 12, though this category is not nearly as competitive as others like “Games” or “Photo & Video.” 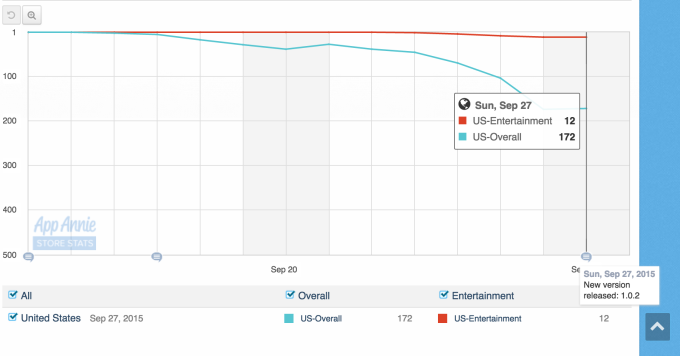 It seems that after the initial excitement over the iOS launches for the sisters’ apps, the downloads and the revenue figures are trending downward. Even the launch of the Android versions of the apps on September 20th offered little more than a small bump in downloads, Apptopia notes. 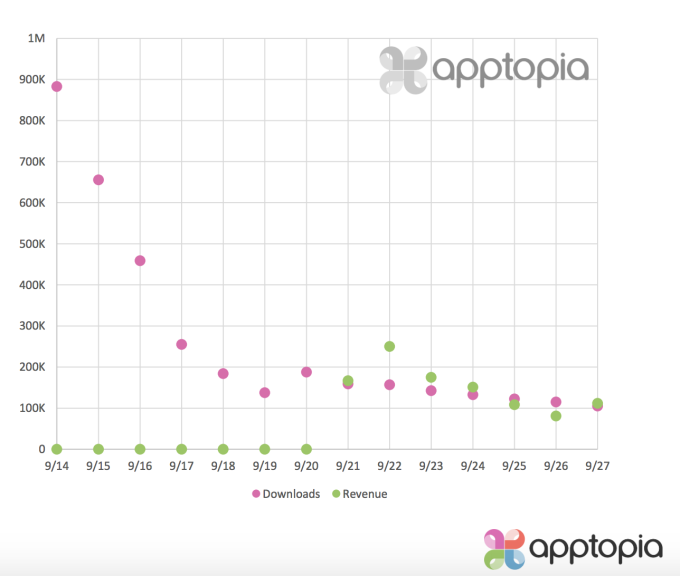 Keep in mind that this is gross revenue, however. Apple still gets to take its 30 percent cut from App Store sales, and the apps’ development partner, Whalerock Industries, is likely getting a percentage of the action as well.

That being said, Whalerock also built accompanying websites for the sisters which charge the $3 monthly fee, and Apptopia’s projections don’t include these numbers. In addition, subscription fees may not be the only way the apps and sites monetize over time – advertising and e-commerce sales may also come into play.

Still, it remains to be seen if the initial 3.7 million downloads and $1 million in revenue will be enough to sustain these businesses in the months ahead – after all, the apps have to be continually updated with new content like diary entries, live video, beauty tutorials, workout tips, and more – as that’s the basis for their subscription fees.

At the end of the day, the Kardashian apps are a perfect example of how the hype cycle can impact an app’s App Store success – but also, how hype doesn’t necessarily translate into a sustainable and profitable business in the long term. The takeaway for mobile app developers, then, may be not to focus on getting media attention right out of the gate, but rather on organically growing a repeat customer base who stay engaged with an app over a period of time.