At 7 PM on February 7, 2007, MindMeister went live in private beta. Today, we have almost 4 million users worldwide, and have become the market leader in online mind mapping.

It’s a story we haven’t told often (too busy working, I guess), but we think it has a few valuable lessons for SaaS founders, especially the ones interested in bootstrapping a profitable business.

We’ll take you through the main inflection points in building the business, as expressed by our Monthly Recurring Revenue (MRR). Oh, and we’ll explain why Google owes us €400,000, at least.

MindMeister was one of the first SaaS startups in Europe.

The idea came to us because we collaborated a lot using Writely, which had just been acquired by Google and later became “Google Docs.”

We also used mind maps a lot, but we were frustrated because there were no mind mapping tools that allowed us to collaborate in real time via our browser. So we built one ourselves. As soon as we developed our first version, we had a feeling we were on to something.

The launch of MindMeister proved that our hunch was right.

Our launch came straight from the startup playbook at that time: We distributed invites to 200 friends and business contacts who were in project management jobs; people like us, who might be interested in mind mapping.

We saw the numbers shoot up in our analytics. People were begging us for more login codes.

It was an excellent start, and it got better when one of those users posted a review on Delicious — the Product Hunt of its day — that made it to the front page.

We launched on February 7th, we were on Delicious on the 20th and on the 21st we hit our first 1,000 users. It felt like an amazing step.

The two most important things are the design and simplicity of your app.

The lesson, we think, is that on the Internet, you can go viral very quickly if you build something genuinely new, something surprising, beautiful and easy to use. I’m convinced that this is still the case. Also, be fast. A few months after us, all of a sudden, there were competitors everywhere — competitors who never got the traction we were getting.

As soon as we opened the beta version to the public, we climbed to 10,000 users. We were still using the invite-only model: Every new user could invite up to 10 friends to MindMeister.

We’re still not sure whether the invite model was actually helping us or not. Yes, we were growing like crazy, but looking at the stats, growth accelerated even faster after we ended the invite-only phase.

We were completely free at the time, although we had a payment option built-in. We told users: You can use MindMeister for free, but some day we will charge for it. Some people went ahead and paid — even though we were still free. Great validation, I guess.

Going freemium was a great choice because it gave us so much visibility and traction in those first years. It made us the market leader, and that is an important claim you can use.

If we weren’t freemium, we might have made more money — but we would never have been a market leader.

Yes, you read that right, and here’s how it happened.

Our hosting was very low-cost at the time, and we had direct access to MindMeister’s user database via a GUI. One day, Till wanted to delete a single user, but for some reason the tool had selected ALL the users in the database — about 10,000 at the time. With a “Yes” on a single confirmation dialog, Till deleted all our users from the database.

Fortunately, we had a backup, and after about three hours of very sweaty work, we were up and running again with no data loss. The lesson is: Always have a backup. And also, read those confirmation pop-up boxes.

Till says it is the closest he ever got to a near-death experience.

Our next inflection point came in early 2008. MindMeister consisted of 3 people, it did not pay a salary. We were still working regular jobs elsewhere to provide an income. But we knew there was interest, and it felt like MindMeister needed more of our attention.

We had seen people willing to pay, so we made the decision to go for a funding round. We had almost 100,000 users by then, and we were still growing. We jumped — and raised €550,000 in seed money, which helped us pay our debts and finalize the product.

We had to give up some shares, of course, and we lost a little bit of freedom. But overall, it was a good decision. Shortly afterwards, we hit the 100,000 users mark. About a year later, we hit the break-even mark at €15K MRR.

From the beginning, we had daydreamed about what we would do when we hit €30K MRR. But the moment we reached it, somewhere in May 2010, we could only think of how fast we could get to the next milestone.

At the time, we doubled our MRR almost every year.

Somewhere in this time, we also made our first acquisition. The iPhone was launched, and we didn’t have the know-how in-house to make an iPhone app. That’s why we bought MindMaker, a startup that had developed a mind-mapping tool for the iPhone — still a very good decision.

Only dead fish swim with the current.

Of course, there were times that were hard. There were moments when we didn’t have our foot hard enough on the pedal. There were periods when we coasted a bit — enjoying our lifestyle, building a house, things like that. Looking back, I regret that.

We should have stayed as aggressive as in the years before. Sometimes, we could feel the company losing momentum. In German, we have a saying: Only dead fish swim with the current. Continued growth is a key lesson for SaaS companies, and you neglect it at your peril.

One of the reasons is the design of your product. People buy stuff with emotions. People develop highly emotional connections to things they use daily, like phones or cars, and they want them to be satisfying and pleasing in order to keep coming back to them.

That’s why, as a startup founder, you should watch every single Apple demo. The two most important things are the design and simplicity of your app. It should work well, look good and make you feel good. If you don’t keep up with changing tastes, a new startup will launch a nicer product and gobble up your user base.

When we had months that nothing moved or nothing improved — mainly during summer holidays — we felt terrible. Every year in the summer, we noticed our mood would darken. We’d start questioning ourselves. Should we do another investment round? Should we move to the U.S.? Will mind mapping always be this trendy? During summer, signups and usage of mind maps decline and you see a drop in the revenue for that month. And you say: What if this is it? The end of MeisterLabs? After eight years, Michael says he’s still not used to it.

You’ll notice that our revenue doubled every year until 2011, then it leveled off at about 135K MRR after 2013. Part of the reason is Google.

For years, we offered our users the option of embedding MindMeister maps in websites. Google at the time suggested creating a backlink to the MindMeister homepage — a great way to get backlinks.

That was until Google decided in March 2014 that it didn’t like these embedded backlinks any more, and they sent us an email saying that we were being given a search-result penalty. We dropped from the first spot on the first page of Google Search to the second or third page — and that actually hurt. A lot.

People will throw spanners in the works along the way.

It was a complete shock to us, and the damage was even worse than we thought — a “minor” update to Google’s search algorithm became a nine-month project to reclaim our top spot in Google. Something like 10,000 websites pointed to us.

And the only way to make the Google penalty go away was to e-mail the owners of these websites and beg them to remove the backlinks.

It took a bunch of freelancers nine months to get the job done. Finally, on December 23rd, we received an email from Google that said the penalty was removed. That was the best gift under the Christmas tree.

But our growth stalled considerably that year — from 30 to 40 percent per year to “just” 15 percent. Till still thinks that Google owes us at least €400,000 because of their sudden change in the search algorithm.

Lesson: People will throw spanners in the works along the way.

Another reason for this slower growth is something that SaaS founders don’t often discuss: the SaaS Growth Ceiling. It’s what happens when churn rates catch up with the rate of your customer acquisition. It is explained here by Joel York:

“…if you acquire 100 new customers each year and your percentage annual churn rate is 20%, then at 500 customers ( 100 ÷ 20% ) your growth will slow to zero, because customer churn will equal new customer acquisition of 100 customers per year. New customers come in the front door, while old customers leave out the back.” 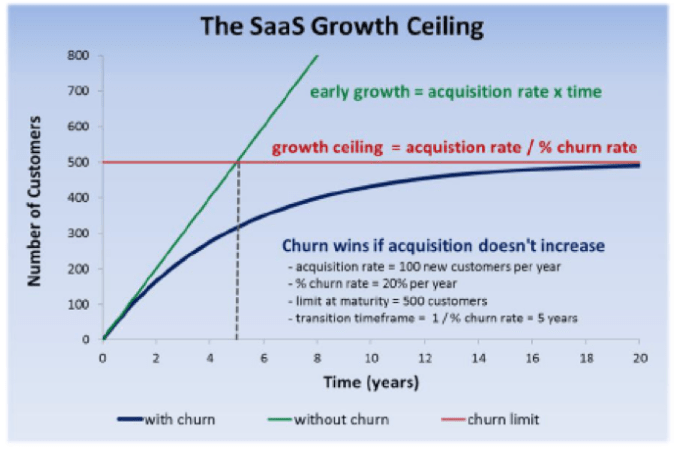 Inevitably, you’ll arrive at a point where you can’t accelerate your lead generation anymore with your SaaS. The only solution then is to work on reducing churn.

That convinced us to create a second product: MeisterTask. A task-management app is more business critical than a mind-mapping tool, we reasoned, and that will make MindMeister stickier, which will reduce churn. Great! We felt we had chosen something that would stick, and we felt the excitement again from the early days.

And with that, we are back somewhere at the beginning of a journey we hope will be as exciting and rewarding as the one we embarked on with MindMeister.

Go left, or go right; it doesn’t matter, as long as you keep on moving.

We invested a big chunk of money in this new application — and about two years of development work. The early feedback we’re getting is that people love the design and usability of MeisterTask, which tells us that at least we managed to create a second tool that lives up to our obsessions with usability and design.

A few months after launch, we have almost 100,000 users (no revenue yet). Will we reach a million users with MeisterTask? No idea. But that doesn’t matter — we saw a problem, we came up with a solution and now it’s up to us to make it work.

The best advice to young entrepreneurs is probably this: If you have to decide something, don’t procrastinate by thinking about all the options. That just wastes time. Go left, or go right; it doesn’t matter, as long as you keep on moving.