9/28/15 UPDATE: According to a blog post on its site, Plug.dj has shut down as of 3PM PT. A playlist export tool is available.

Thank you for the fun! We’ll be shutting down at 3PM PDT today – http://t.co/yJ1WZTbSTv

For everyone asking: We had 60k “every single day” hard-core users (1m total MAU). Only 2.9k of them subscribed/donated. We needed 15x that.

Remember the hotness that was Turntable.fm? It was a one of my favorite apps of a few years ago (2011 to be specific), since it was social and focused on music. For those who aren’t familiar with it, you’d have a little avatar that entered themed rooms where you could chat and you’d take turns being the DJ…playing your favorite music. Unfortunately, it shut down because paying labels and artists for the streams of those songs is ridiculously expensive thus returning our offices to full productivity (the thing was addictive). It raised $7M and still couldn’t survive.

A site called plug.dj had come along to fill the gap in 2013, smartly using YouTube videos to stream the music, but just can’t make ends meet and is now asking for donations. It’s likely to shut down too, causing me to give up on the social+music genre of apps completely. The company has raised $1.25M in seed funding. This is starting to sound familiar.

Here’s what the team had to say a week or so ago:

It has come to the point that the costs of running plug.dj exceeds the income that we are generating, and that could prove disastrous to the future of plug.dj if we don’t make some important changes very soon.

We have already scaled back our operating costs to the bare minimum in the hope that we can keep our servers online, the music pumping and the community connected.

We are dedicated to doing everything that we possibly can to keep plug.dj alive! But we can’t do it alone. We also need YOUR help!

If 6% of the people who use plug.dj each month donated just $6 today, or if 10% donated $1 each, we’d hit our goal needed to operate for the next 6+ months, build an Android app and pursue other fundraising opportunities. Without your help, we cannot continue to build the community we’ve all grown to love.

The company updated its progress in an email sent to its community today:

We’re a little halfway over our donation goal with only a few days left (at the time this email is written we’re at 62%). In order for plug.dj to exist next month, we need our amazing users to subscribe or donate; otherwise, we’ll have to shut our doors at the end of the month.

In an explanation of where the money goes, the team tries to share with its community what it takes to keep the thing afloat…since it’s a business and needs to pay its employees, after all.

While funding the site through the community is doable, it’s highly unlikely that plug.dj can be saved in a last second situation. It causes a lot of stress for everyone involved. Stranger things have happened though and it’s going to take some fast action and cash from its active community of users. In essence, we’re about to find out just how engaged they are. Could the site survive just by selling little trinkets and powerups for your avatar like they do as well and maybe charge a small subscription price in the future? Time’s running out.

We’re not giving up! We need everyone’s help to reach our goal by the 28th of this month or we shut down! https://t.co/Ilu8SOGOue 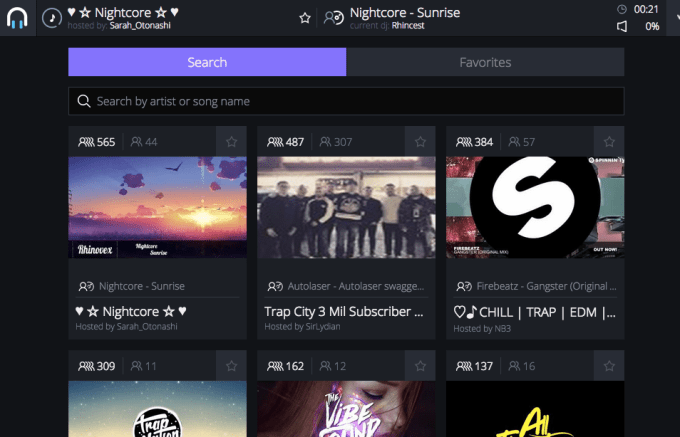 Are you listening Sony? One of the other big labels? This kind of site is a great way to get your music out to fans and have them interact with musicians. Why not scoop plug.dj up and give its team a chance to prove out the model. It’d make a great experimental interface for a company like Spotify, too! Huh? Whatcha think Spotify?

Why can’t this app, platform and business model survive? Ugh.

UPDATE: plug.dj’s CEO and founder Alex Reinlieb jumped into the TC comments to share some stats and details about the site:

Across our thousands of active rooms, we have over several million music lovers from all around the globe that are curating over 40M songs monthly from the world’s largest media libraries. Our crowd-sourced approach enables us to optimize curation across a globally diverse set of genres as well as predict trending tracks at scale. Yes, tracks trend on our site before they hit the charts.

Our average user spends an average of 2 hrs 30 min per visit (YouTube boasts 40 min) selecting, listening and voting on songs/videos together in realtime, we actively generate highly relevant data on people’s interests that can power external playlists based on a genre, mood, or theme.

By the way, for all those in the e-sports realm, a major portion of our referral traffic comes from Twitch. People love to listen to music and participate while they watch gaming streams. They also love to learn from videos and listen to game music on our site.